Why Are Organic Cranberries So Hard to Find? | Civil Eats

Why Are Organic Cranberries So Hard to Find?

Less than 1 percent of cranberries grown in the U.S. are organic. These farmers are working to change that. 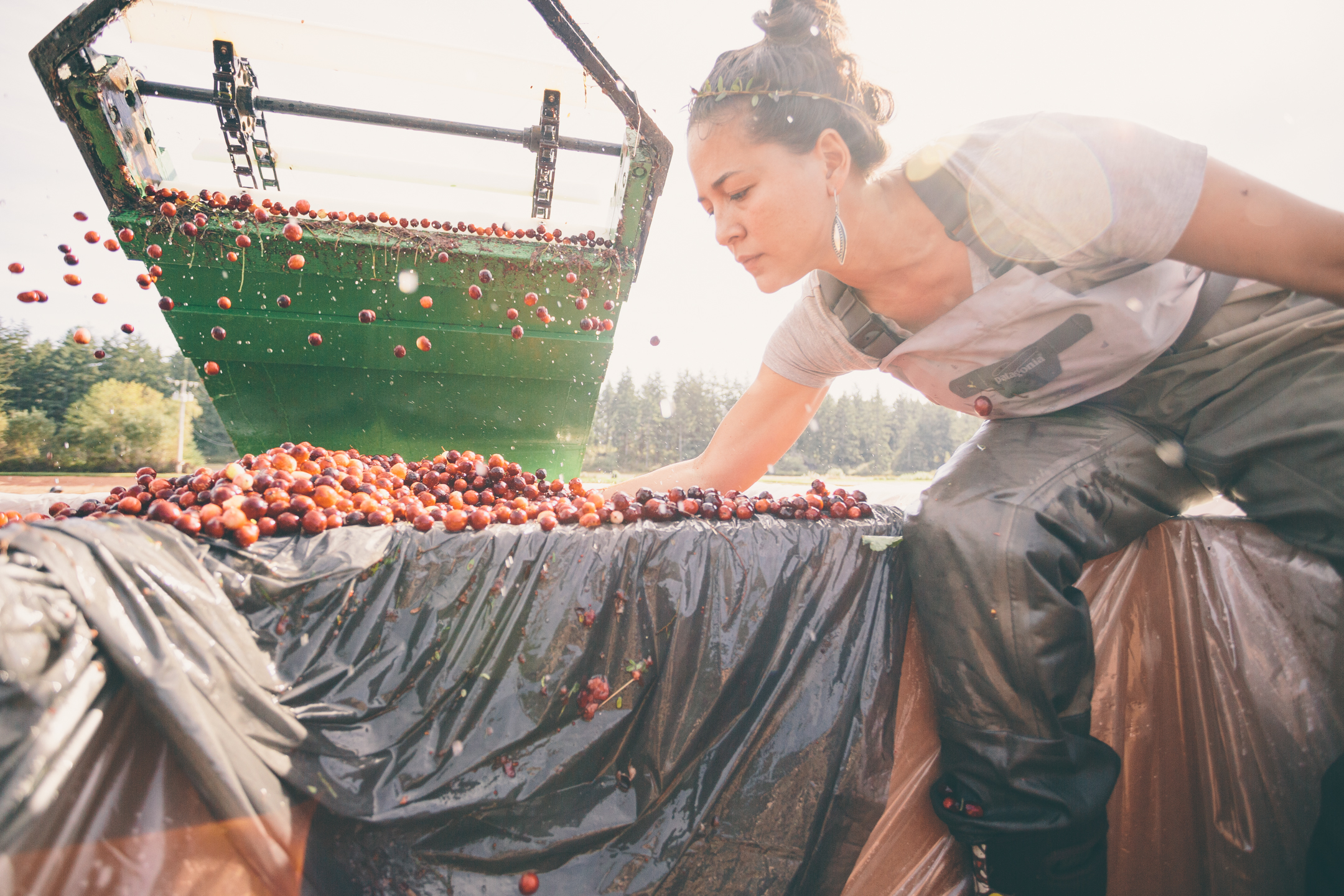 As the holidays approach, fresh cranberries are once again appearing in grocery displays across the country. But if you’re hoping to score some organic cranberries, you might find yourself beating the bushes to find them.

While cranberries, in general, are considered a specialty crop in the U.S., organic cranberries are truly niche. Of the 40,000 acres of commercially managed cranberry bogs in this country, just a sliver—roughly 200 to 300 acres—are organic. All the organic cranberry beds in the U.S. could be squeezed into an area about one-third the size of New York’s Central Park.

Touted by dieticians for their nutritional value and prized by foodies for their culinary versatility, these tiny fruit are notoriously difficult to farm. Cranberries grow slowly. Many varieties are biennial bearing—it takes them two seasons to bear fruit. Cranberries grow on vines in sunken beds called bogs. Some growers dry- harvest the berries. Others flood the bogs and corral the cranberries, which float. Weeds, insects, and pathogenic fungi thrive in the boggy, wetland conditions needed to cultivate cranberries. And organic growers have few tools to fight these pests.

When Jessika Tantisook and her partner took over a conventionally grown cranberry bog in hopes of turning it into an organic farm, university researchers and other growers told them it couldn’t be done.

“There was astonishingly little information out there to guide us,” said Tantisook, co-owner of Starvation Alley Farms in Long Beach, Washington. Through trial and error, the couple began transitioning the 10-acre bog to certified organic—a process that takes three years.

The local agricultural extension helped them to identify pathogens and other growing problems, but offered little in the way of organic solutions. Tantisook says they relied heavily on tips from organics experts from other industries. For instance, they used compost tea to build up healthy organisms in the soil—a strategy they learned from an organic blueberry grower. 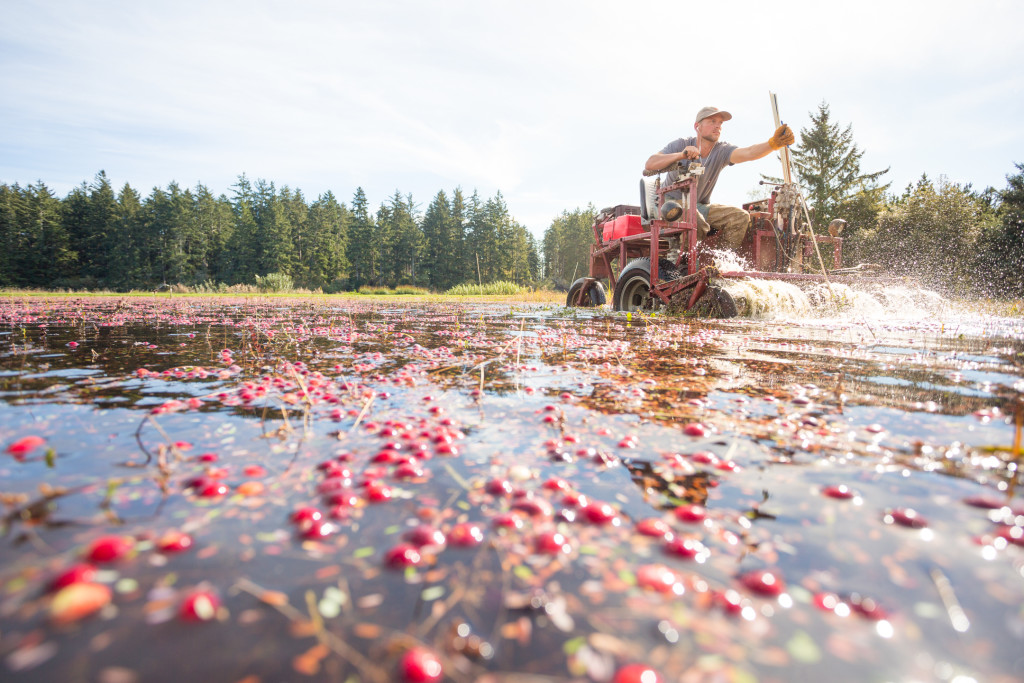 Commercial cranberry growing can be a pesticide-intensive process. “The pest control paradigm has been dominated by chemical insecticides and fungicides,” said Shawn Steffan, an entomologist at the University of Wisconsin who specializes in cranberry pests.

In 2006, the U.S. Department of Agriculture’s Pesticide Data Program found 13 different pesticide residues on the cranberries they tested. “When a wide number of pesticide residues are found on a crop, there’s concern for impact on human health and the environment, such as pollinators,” said Emily Marquez, a staff scientist at Pesticide Action Network.

Last summer, researchers at the University of Wisconsin showed that commonly used fungicide on cranberries might harm bumblebees. Wisconsin, Massachusetts and New Jersey are the top cranberry producing states, followed by Oregon and Washington. Cranberry pests vary by region, but generally fall into one of three categories: insects, fungal diseases, or weeds.

John Stauner had worked in the industry for several years when he purchased his own cranberry bog in Northern Wisconsin around 2005. He knew that transitioning the 55-year-old marsh to organic wouldn’t be easy, but he liked the challenge.

“I think ultimately, it made me a better grower,” said Stauner, owner of the 65-acre James Lake Farms in Three Lakes, Wisconsin. James Lake, according to Stauner, is one of the biggest certified organic cranberry marshes in the country.

“With organics, we’re managing an ecosystem, not just a monoculture,” he said.

Stauner uses non-chemical controls as well as organic pesticides as part of a method experts call integrated pest management—using several pest control tactics to minimize the amount of organic pesticide he needs to us. In the spring, he floods his fields to kill insect larvae. He also uses mating disruption—a technique that utilizes insect sex pheromones—to keep male insects from finding and mating with females.

Weed control is tougher, said Stauner. The type of weeds that threaten cranberry bogs aren’t the easy-to-pull variety that grow in your home garden. They’re sedges, large grasses, and even trees. Stauner tried flame torching the weeds and killing them with vinegar, but still resorts to manual pulling once a week during the growing season. Part of his strategy has been to propagate his most aggressive cranberry vines—the ones that seem to outcompete the weeds. 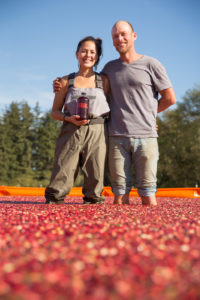 Cranberries—harvested each year from mid-September through early November—are one of the few commercially grown fruits native to North America. Native Americans gathered wild cranberries to use as a food, fabric dye, and medicine, but they weren’t cultivated as a crop until the early 1800s, starting in Massachusetts.

Research to understand cranberry basics can help to make farming techniques more efficient and sustainable, said Amaya Atucha, a University of Wisconsin Extension fruit crop specialist. Atucha studies cranberry root growth patterns—research she says will help both conventional and organic growers to use fewer fertilizers. Her colleague, Shawn Steffan, is experimenting with drones to disperse insect pheromones for mating disruption in cranberry bogs, a technique he says will have direct benefits for organic growers.

In Massachusetts, where cranberry farmers have major problems with fruit rot—a disease caused by several types of fungi that make berries turn soft and brown—extension specialists are experimenting with non-chemical techniques such as installing drainage tiles to remove surplus water from fields, said Sandler.

There’s a lot of interest around genetic breeding programs to create pest-resistant plant varieties that’ll require fewer “inputs” from farmers, said Atucha. “I think in the future, a lot of problems we see with cranberry production will be resolved in this way,” she said.

For now, organic cranberry production remains a pursuit for the intrepid, yet farmers such as Tantisook and Stauner are finding ways to innovate and meet the growing demand for organic produce.

Tantisook says the boom in craft cocktails has been a boon to Starvation Alley, which supplies organic cranberry juice to several bars and restaurants in the Pacific Northwest.

Stauner partners with fruit broker Naturipe Farms and Trader Joes to distribute fresh and frozen organics to grocery stores around the country.

Starvation Alley hopes to lead by example, according to Tantisook, who says they are currently helping three other cranberry farms in the Pacific Northwest transition to organic. “We’ve had tremendous support from consumers,” she said, but she adds that industry “dollars” are essential for “figuring out how to make organic more viable and accessible for growers.”

Lindsey Konkel is a New Jersey-based science journalist who writes frequently on environment and health topics. Her work has appeared at print and online publications including: Newsweek, National Geographic, Environmental Health Perspectives, and Science. Read more >