More Than Half the Trees in the Amazon at Risk of Extinction. Are Your Groceries to Blame? | Civil Eats

More Than Half the Trees in the Amazon at Risk of Extinction. Are Your Groceries to Blame?

Researchers say expanding food production could radically reduce biodiversity in these important forests over the next 30 years. 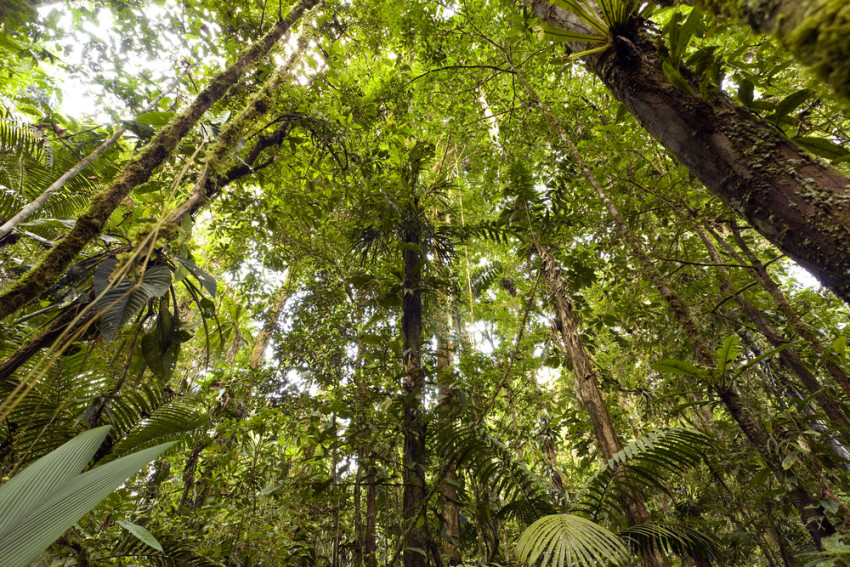 The Amazon is one of the most biologically diverse places on earth. It is also diminishing rapidly. A new study published today in Science Advances looked at more than 15,000 Amazonian tree species and found that more than half of them may be at risk for extinction due to deforestation. This massive tree clearing threatens these forests’ biodiversity, their ability to mitigate climate change, and, in many places, the welfare and safety of local communities.

What’s causing this deforestation? In a nutshell, it’s what we’re eating, from burgers to bacon and snack foods. The Amazon’s forests are being cleared to raise cows for beef, and grow soybeans to feed livestock, cocoa plantations for chocolate, and palm trees for palm oil, an ingredient now estimated to be in about half of all packaged foods.

Across the Amazon, farm owners and developers are intentionally clearing forest land, “for agriculture in one form or another,” Agteca-Amazonica staff scientist Timothy Killeen, one of the paper’s lead authors, told Civil Eats.

The paper’s 158 co-authors from 21 countries examined trees in thousands of forest plots across the Amazon, to study tree loss over the past 10 years in nine countries: Bolivia, Brazil, Colombia, Ecuador, Peru, Venezuela, Guyana, Suriname, and French Guiana. The goal was to create an accurate estimation of what may happen to individual species between now and 2050.

Under the scientists’ worst case scenario, up to 57 percent of the tree species would dwindle to a point that would qualify them as “globally threatened.” Under their best case scenario, that fraction would be 36 percent. This is a serious concern, not only in terms of individual species, but also because greater diversity means a healthier and more resilient forest, one that is better able to withstand and bounce back from adverse impacts.

Many of these native trees species are important to local and indigenous people’s food supplies, including cacao, Brazil nuts, and acai. “Among the species that we think are probably threatened are hundreds that local people use for food, medicine, construction material, latex, essential oils, and more,” explained Field Museum ecologist Nigel Pitman, one of the paper’s other lead authors.

The specifics vary somewhat by country, said Killeen. But, “the overwhelming majority of forest clearing is for beef cattle—in excess of 80 percent.” Much of Brazil’s beef is consumed domestically, but the nation is also a one of the world’s largest beef exporters. Brazil is expected to export more than 2 million tons this year, according to one industry source. And according to United Nations data, Brazil’s beef production has about doubled in the past 20 years.

Brazil is also now the world’s second largest soybean producer (following the U.S.) —with most of this going to feed meat animals. And Brazil, Ecuador, and Peru are among the world’s top 10 cocoa producers.

Although most of the world’s palm oil supply currently comes from Indonesia and Malaysia, increasing demand has prompted producers to move into Latin American countries. This includes Peru where illegal forest clearing has become a problem, says Rain Forest Action Network (RAN) forests communications manager Emma Lierley. The U.S. market for palm oil shot up in the past decade as processed food manufacturers moved away from trans fats and partially hydrogenated oils (PHOs), shifting to palm oil as an alternative. When the U.S. trans fat ban goes into effect in 2018, RAN spokesperson Laurel Sutherlin says that demand could increase further.

Slowing the Pace of Deforestation

So what’s the solution? “There’s no silver bullet out there. No way to create agriculture that can coexist with the forest,” said Killeen.

That said, there are efforts underway to minimize agriculture’s impact on Amazonian forests. One strategy is to intensify production, to produce more crops per acre, in order to reduce the need to clear still more forest.

Major companies that buy and sell palm oil and soybeans are also working on programs to keep these crops from being sourced from recently deforested areas. “This is not necessarily deforestation-free agriculture,” says Killeen. “It’s just trying to use markets to reward companies that are not contributing directly to deforestation.”

At the 2014 United Nations Climate Summit, a number of large food producers – among them McDonald’s, General Mills, Nestlé, and Walmart—signed on to the Global Alliance for Climate-Smart Agriculture and the New York Declaration on Forests, which includes a goal of cutting global forest loss in half by 2020 and ending it by 2030.

One such agreement, known as Brazil’s Soy Moratorium, began in 2006 and is credited with dramatically decreasing the rate at which forests were being cleared to make way for soybean fields.

A recent assessment, led by University of Wisconsin researchers, found that before the moratorium about a third of soy expansion occurred through deforestation, gobbling up about 2.5 million acres of Amazonian forest between 2001 and 2006. After the agreement was in place, however, new soybean fields were only responsible for about one percent of Brazil’s deforestation.

Although far more limited in scale, an effort to curtail forest clearing for beef ranching has also shown promise. And while successful, the Soy Moratorium does not necessarily appear to have helped curtail illegal forest clearing.

Yet another piece of the preservation puzzle is establishing protected areas. The new study’s authors suggest that such areas could significantly reduce the number of tree species likely to become threatened over the next few decades. Yet enforcing the rules required to maintain protected areas is a challenge throughout the Amazon, where illegal logging is a chronic problem.

While the impending scarcity of Amazon tree species sounds grim, Killeen and Pitman say their paper should not be read as a doomsday scenario. Instead, it could give scientists the tools they need to protect these forests better.

“Ultimately we want to prevent extinction and we will have trouble if we can’t keep track of species that are the rarest and most at risk,” says Pitman.

In the meantime, reining in the world’s appetite for meat and highly processed snack foods may be what it takes to keep these forests’ astounding diversity of trees from disappearing.