The political momentum is yielding results and raising important questions about wage regulation and poverty. 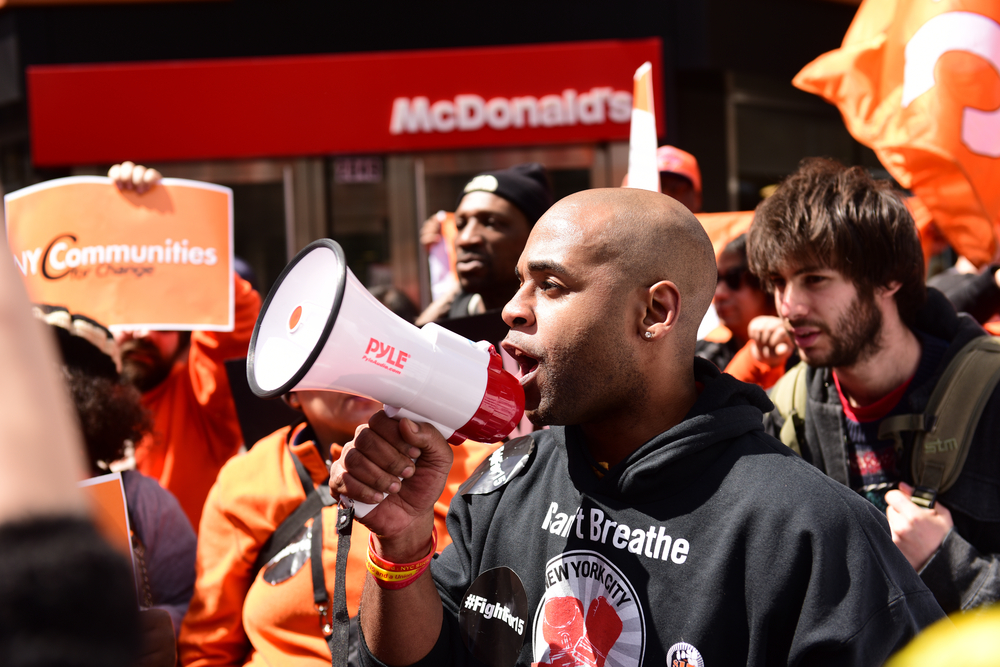 On Tuesday, fast food workers went on strike in hundreds of U.S. cities, calling for a $15 an hour minimum wage and the right to organize. Striking workers and their supporters aim to make this issue a political priority for the 2016 presidential election.

Considering the fact that almost 47 percent of minimum wage earners are in the food industry, it shouldn’t surprise us that food workers are at the forefront of the movement to increase wages for the lowest paid workers in the country. Since the first protest held almost three years ago in New York City, the movement has targeted fast food companies like McDonald’s and Burger King, which have reputations for paying low wages while simultaneously raking in billions of dollars in profits, year after year.

However, over the last three years, the Fight For 15 movement has grown to represent the interests of low wage workers from a variety of sectors, including childcare workers, airport workers, and adjunct professors. The political momentum has started to yield results through municipal policies: $15 an hour wages will be in effect in Seattle by 2017, Los Angeles by 2020, and San Francisco by 2018.

In New York, after a July announcement to raise the minimum wage for New York City fast food workers to $15 an hour by 2018, Governor Cuomo announced on Tuesday that all state employees will receive $15 an hour by 2021.

This momentum is a big deal. As a labor movement, it is building unprecedented political power after recent defeats in places like Wisconsin. At a moment when the issue of economic inequality is seen as a critical social issue by many, it’s not surprising that the movement is raising important questions about wage regulation, poverty, and the overall economy.

How Does the Minimum Wage Work?

To better understand the big picture of what higher wages could mean for low wage workers and the economy in general, I asked University of Vermont economics professor Stephanie Seguino about the implications of higher wages on workers and long-term economic health.

Consequently, it has failed to keep up with inflation, and today’s $7.25 an hour minimum wage is 30 percent lower than the 1968 minimum wage of $1.60 an hour ($10.86 in today’s dollars). This handy chart shows how the real value of the minimum wage has changed over time.

Seguino pointed out that the stagnation of the minimum wage, especially during times of economic growth, has occurred in sharp contrast to the rise in productivity—a factor directly linked to the rise in inequality: “The gap you see between wages and productivity growth has gone to profits.” The most recent example of this dynamic is that 95 percent of the economic growth between 2009 and 2013 went to the top 1 percent of the population.

Considering that the federal minimum wage hasn’t been increased since 2009, it’s probably time for an upgrade. Even the Department of Labor supports raising it.

Is $15 an Hour Unrealistically High?

Let’s first take a step back and ask a different, but related, question: What does a worker need to earn to afford to live in the United States?

According to the federal government, the minimum wage should be sufficient to keep a person out of poverty. But if we dig into the numbers, it becomes apparent that this is based on a pretty skewed estimate of what it costs to live in the modern world. The federal minimum wage provides a full-time employee* with an annual salary of $15,000 a year, which exceeds the federal poverty guideline of $11,770 for one person.** However, the reality is that federal poverty calculations woefully underestimate the cost of living for an individual, much less a family.

Cost of living estimates, like the MIT Cost of Living Calculator, are much more realistic. They calculate the actual costs of expense categories such as transportation, housing, and childcare, as well as factors like location, number of children, and whether one or two adults are working.

This interactive map demonstrates the significant gap between the minimum wage and the living wage in counties across the United States. As you’ll see, a jump to $15 an hour may at first glance seem drastic, but these calculations show that the current minimum wage is woefully inadequate, and even $15 an hour may still be too low.

Naysayers claim that raising wages will pinch businesses, causing them to cut jobs and hike prices. However, the evidence shows that these claims don’t hold water: research on cities and states that have raised the minimum wage has found that those communities have not experienced job losses or price increases.

As it turns out, when you raise the incomes of low wage workers, they tend to spend that money (in sharp contrast with high wage earners, who tend to put it into savings), which actually has the potential to stimulate local economies. When we consider that the bottom 80 percent controls only 4.7 percent of all financial wealth in the country, it’s easy to see how a little more can go a long way for a local economy.

Another factor is that many businesses that pay minimum wage can’t pack up and move overseas. Seguino pointed out that, “McDonald’s can’t move to China and still sell hamburgers locally. So when their minimum wages rise, they are forced to pay that.”

A common misconception is that most people who rely on the Supplemental Nutrition Assistance Program (SNAP) or “food stamps” are unemployed. The U.S. Department of Agriculture’s Economic Research Service paints a different picture in their report Food Insecurity in Households With Children. “[In] 2010-11, 75 percent of households with food-insecure children had one or more adults in the labor force, including 60 percent with a full-time worker,” it reads.

The Bread for the World Hunger Report 2015 recommends raising the minimum wage as a key tactic for reducing hunger, and Seguino agrees: “The evidence from all economic studies that I have seen shows that one of the single most important ways to take people out of poverty is to raise the minimum wage.”

The answer is “unequivocally yes,” according to Seguino. Right now, low labor costs enable CEO-to-worker compensation ratios of 300-to-1 (or more) and externalize workers’ cost of living to the public sector. Increasing the minimum wage requires the private sector to take more responsibility for covering workers’ cost of living. In fact, Seguino explained, “some conservatives have argued that this is a way to reduce the role of government,” since so many low-wage workers would be liberated from relying on federal programs funded by taxpayers.

Of course, other labor issues (such as health care benefits, parental leave, sick pay, etc.) would need to be addressed to ensure that employers don’t find other ways to cut costs at the expense of worker compensation. If the Fight For 15 movement is successful in its bid to expand unionization, it could provide workers with the leverage to pursue gains in those areas as well.

Providing dignified compensation for American workers will require overcoming some significant political hurdles, but Seguino offered words of encouragement: “if you don’t put the issue on the table, it never even gets debated.”

Which leaves me with just one last question: When can we start talking about a maximum wage?

*Many low wage workers are under-employed, either not working a full time schedule or not working consistently throughout the year.

Alison Nihart works for the University of Vermont Food Systems Initiative, a university-wide initiative to promote food systems research, education, and outreach. Alison has a master’s degree in Natural Resources, with a focus on urban agriculture policy. She is based in Burlington, VT. Read more >