Is Food Foraged in Cities Safe to Eat? | Civil Eats

Is Food Foraged in Cities Safe to Eat?

Early research has found that some foraged urban foods are not only safe, they also have higher levels of nutrients. 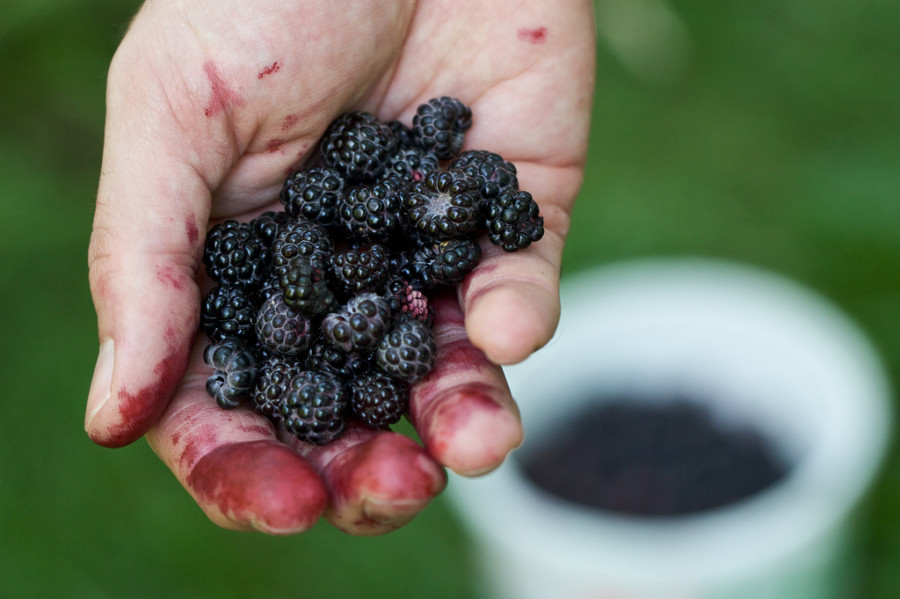 Food forests and edible landscapes are popping up in cities all over the nation, leading to a kind of urban foraging renaissance. But should foragers be worried about lead and other heavy metals in the food they’re finding?

Researchers at Wellesley College recently teamed up with Boston’s League of Urban Canners (LUrC) to find out. LUrC members frequently forage for food in Boston-area fruit orchards, and when one of their members tested high for blood lead levels recently, the group turned to Dan Brabander, a geoscience professor at Wellesley College, for answers.

Brabander’s lab has worked on environmental geochemistry, health, and quantifying toxic metal exposure pathways in urban settings for over a decade. And when LUrC came calling, he had a team of undergraduate researchers working with him who were eager to tackle the problem.

Foragers often harvest fruit along major roadways, on historical properties, in parks, and even in industrial settings. And LUrC members often focus on heirloom varieties and abandoned trees.

LUrC members provided Brabander’s lab with foraged samples. The fruit was dehydrated to mimic the preservation methods LUrC members used, and tested for contaminants and nutritional properties. The researchers’ findings defied their expectations (as recently as 2013, warnings about potential lead contamination in urban foods were making headlines).

But all of the 45 cherry, peach, apple, and other fruit and herb samples the lab tested so far showed relatively low levels of lead and arsenic. For example, the apples showed lead levels ranging from 0.5-1.2 micrograms per gram, which equates to significantly less than the 5 micrograms per deciliter blood lead levels that represent the maximum recommended for a child.

The Wellesley team also expected to see higher levels of heavy metal on unpeeled fruits than on peeled fruits as a result of soil, dust, and air pollution.

“We found there was no difference between these variables,” said Ciaran Gallagher, a member of Brabander’s team. Gallagher is majoring in Environmental Chemistry at Wellesley and co-presented the group’s findings at the recent Geological Society of America conference in Baltimore, Maryland with several of her fellow undergraduate research team members.

The way that different plants absorb contaminants is still being studied, but roots and tubers usually have the highest lead and arsenic concentrations, followed by leafy greens like spinach and mustard. Fruits and seeds, on the other hand, are literally at the other end of the plant and tend to have the lowest likelihood of contamination.

The Wellesley researchers were also quick to point out that not all soils are created equal. Lower pH soils might encourage higher levels of lead contamination in fruits and greens that are foraged. There are a lot of variables at play. As Brabander told Civil Eats, “for now, there is precious little published data on this question, so it would be prudent to do more site-specific testing before evaluating how the observations made in Boston can be generalized.”

Still, this is promising news for urban foragers, and it doesn’t stop there. The LUrC/Wellesley study also showed that apples and peaches foraged in the Boston area contained more than 2.5 times the calcium of their conventional counterparts. According to Gallagher and team, urban fruit also contains a wider range of micronutrients than the fruit available in most stores.

Calcium and iron concentrations were higher for all the fruits the group tested, and other trace minerals—including manganese, zinc, magnesium, and potassium—were also higher in some varieties. This is an important finding, as individuals who are deficient in calcium are also more susceptible to lead poisoning.

Stark is the lead investigator for the Berkeley Open Source Food project, where he and a group of students tested Bay Area soils for several metal contaminants as well as for nutritional composition. In all the species of foraged greens the group sent for testing, he says, “we found that even in soils with relatively high concentrations of lead (700ppm), the level of heavy metals was not a concern to eat in moderate quantities.” But Stark also advises foragers to wash all found plants well. “The dust and dirt on the leaves can have harmful levels of lead and other things,” he adds.

Professor Brabander believes this type of research can help complete a much larger puzzle. As more studies emerge, the safest ways to practice urban foraging and to plan intentional urban orchards and gardens will be more clearly defined. All this is important, adds Brabander, because, “there are so many community-level benefits from [urban foraging]—from increased food sovereignty to building community resilience!”

Corrections: This article originally stated that the scientists had tested 166 samples. In fact, they have tested 45 so far and will continue to test the remaining samples in the coming months. The maximum lead level has also been updated to reflect the newest number.

Christina Boyes is a freelance writer who covers a wide range of topics for numerous publications and companies, from Real Clear Science to Travel Thru History. She is passionate about food security, climate change, and earthquake seismology, as well as natural health and nutrition. Christina is a mother, writer, and a chocoholic—in that order. You can follow her on Twitter @Rusmexuswriters. Read more >