Native American communities are connecting to their roots through food, farming, and education. 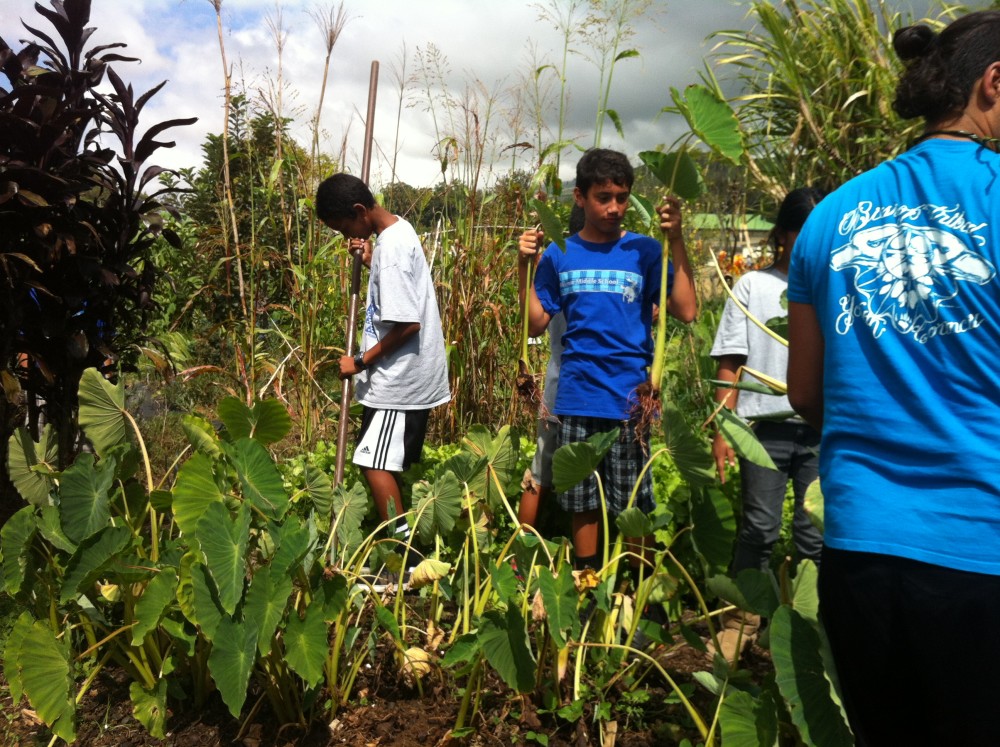 The good news is that many communities are working to shift these statistics using traditional food, agriculture, and education. As Alena Paisano, a member of the Laguna Pueblo community who works with Farm to Table New Mexico, puts it: “These lessons go back hundreds of thousands of years. This is in harmony with our creation stories.”

Here are a few examples of what’s working, recorded at a gathering of the Native Communities Cohort of the National Farm to School Network this summer.

Clayton Harvey, farm manager of Ndèe Bikiyaa, the People’s Farm, in White River, Arizona, is growing carrots, beets, radishes, and kale in service of restoring personal and cultural health among his White Mountain Apache people. The farm has a community center on site and hosts an annual Apache harvest festival in addition to making organic produce available in the community.

“Ladies leave with armfuls of squash,” says Harvey of his market stand. The farm also runs a summer internship program for young people focused on entrepreneurship and fostering new farmers. “Life on the reservation is not that great, we’re just exposed to so many negative things,” he says. Harvey’s own teenage years included drugs and alcohol, but, he adds, “farming brought me back to life.”

Elder Eric Whyte from Ute Mountain Ute Tribe in Southwestern Colorado offers another model for community farming. He’s focused on opening a multimillion-dollar state-of-the-art mill to process the white, red, and blue corn the tribe grows on its diversified 7,700 acre farm. They market the corn under the label Bow & Arrow Brand. Others raise cattle and grow alfalfa and wheat. With years on the farm under his belt and now as a community elder, Whyte is eager to position farming and ranching as attractive to young people.

Sherry Allard, Cindy Dinonne, and Lise Erdrich, a can-do team from the Circle of Nations School in Wahpeton, North Dakota, are revitalizing the school’s gardens and orchards and cooking with kale the students grow. Kale pizza, kale chips, and kale yogurt smoothies have been recently been tested.

“The kids say, ‘I’ll eat the vegetables as long as they’re really chopped small,’” says Erdrich. Theirs is an intertribal boarding school established in 1904 and affiliated with the Turtle Mountain Chippewa. Serving traditional tastes alongside the yogurt smoothies is an important part of their programming; the school grows indigenous potatoes and Dakota corn in the garden and serves bison grown by the Inter Tribal Buffalo Council, a partner committed to “re-establishing buffalo herds on Indian lands in a manner that promotes cultural enhancement, spiritual revitalization [and] ecological restoration.”

She runs taste tests as schools incorporate more vegetables into their cafeterias; kids respond on a scale that includes “yuck is my new yum” and “I’ll eat it everyday.” Sustʻāina ble Molokai also manages a food forest at the local high school, providing access to bananas, taro roots, and sweet potatoes to their community, over 73 percent of which identifies as Native Hawaiian.

Gloria Begay is a teacher-turned-activist. In response to the high rates of obesity and diabetes in her Navajo community, she and a number of others worked to create a trailblazing “junk food tax.” Officially called the Healthy Dine Nation Act and signed into law in April 2015 by Navaho President Ben Shelley, the law requires consumers to pay an additional two percent tax on top of Arizona’s five percent sales tax for high-fat and high-sugar foods they buy on the Navajo reservation.

The revenues will support health and wellness initiatives like farmers’ markets. More than 80 percent of food sold in Navajo stores is junk food, Begay says, and she and her team, the Diné Community Advocacy Alliance, are working to change that fact. The group also runs a food literacy program with high school students. “There is so much cultural knowledge around food that needs to be restored,” Begay says. “We want kids to re-appreciate who they are and where they come from.”

A “veggie bucks” program in Cherokee Nation gives kids six dollars to take to farmers’ markets where they can buy their own produce. Pam Kingfisher says that strawberries and eggs are the most popular items and that the young people tend to their purchases carefully. “Twelve dozen eggs make it home on the bus, nothing broken,” she adds. The veggie bucks program is accompanied by taste tests and school gardens; the gardens integrate math and science curriculum and introduce young people to traditional Cherokee crops with plantings from the tribal seed bank.

David Bender of Chicago’s American Indian Center describes a three sisters garden wedged between sidewalk squares out in front of the building. The three sisters are corn, beans, and squash; inter-planting has been a traditional practice in many native communities. “We’ve been growing like this for 7,000 years,” says Bender, who is Anishanabe. “There’s a lot to learn from the three sisters.”

The center serves people from over 200 tribes around the Chicago area and runs educational programming. In addition to exploring traditions via the garden, youth tend ceremonial sage and juniper plants, tap the maple trees on their urban block, practice archery on the third floor of the center, and take fieldtrips “up north” to harvest wild rice.

With 7,000 years of tradition behind them, leaders like these take future generations into account. “My vision is for my children to grow up proud of their culture,” Paisano says. Or, as Begay puts it: “We have a lot of work to do. But it’s good work.”

Laura Fieselman writes at the intersection of food, farms, and culture. She also works with the National Farm to School Network and lives in Chapel Hill, North Carolina. Read more >