Farming to Table: Adding ‘Farmer’ to a Chef’s Resume

How Green Table’s Mary Cleaver and her husband Ashley Hollister are working a farm into their sustainable restaurant and catering business. 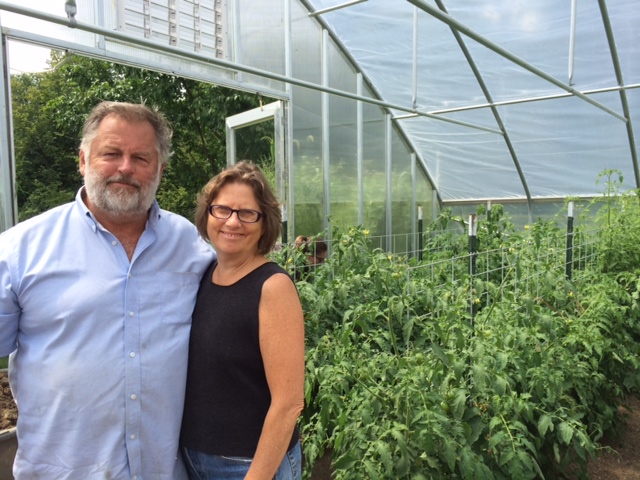 In front of Ashley Hollister and Mary Cleaver’s Washington County, New York farmhouse sits a partly dismantled 62-year-old combine the size of a small truck, freshly painted to forestall corrosion. Since it hasn’t been used for 30 years, the farmer is curious to see if, after he’s done refurbishing the machine, it will work. He found it online, drove to Ohio to pick it up, and paid only $400 for it—a great deal.

“This was the standard size combine for decades; now they’re much bigger,” Hollister explains. In the era of large-scale monocropping, he points out, “nobody tries to raise 15 acres of grain anymore.”

Nobody, that is, except people like Hollister and Cleaver, who have begun farming on a small-scale, diversified level, shunning chemical fertilizers and pesticides, building up the soil, and rotating complementary crops in order produce the most delicious food possible.

When the couple, now in their 60s, bought the 197-acre former dairy farm in 2012 for $500,000, they both knew a great deal about food systems and the local organic movement, but little about the practice of farming.

Cleaver has been a key player in New York’s farm-to-table movement for 35 years, as a caterer, restaurateur, and local food activist. As owner of a $4.8 million Manhattan business that includes catering operation The Cleaver Co., and a 51-seat local and sustainable Chelsea restaurant, The Green Table, Cleaver was the first to track down locally grown tomatoes for her customers back in 1979. She’s also the crusader who launched an organization called the Farm to Chef Network in 2003, and the recipient of the first Slow Food New York City “Snailblazer” award in 2011 for her efforts to improve local food systems.

Hollister, meanwhile, had dreamed of buying a farm since he and Cleaver met as students at Bennington College in Vermont in the early 1970s. Instead, he became a mechanical technician for movies and television, and the couple settled in Brooklyn and raised a family. Returning to that agrarian dream when their children were grown called for “a tremendous amount of work and money,” says Cleaver, yet the farm has made her business a truly vertically integrated farm-to-table enterprise. “It really feels as though the circle has been completed,” she adds.

While the rewards after two seasons on the farm have been significant, the actual practice of farming, largely undertaken by Hollister while Cleaver keeps her business running in Manhattan, has been humbling. For one, it takes more concentrated, strategic thinking than they expected. Hollister compares mastering the complex task of learning chemistry, biology, ecology, meteorology, and ancient folk wisdom to “understanding the human brain,” and adds, “I’m just beginning to scratch the surface of farming.”

The farm is located just north of Albany, where lush green rolling hills are dotted with dilapidated barns and drivers automatically give right of way to tractors rumbling down the road. Hollister produced 2,000 meat chickens for Cleaver’s famed chicken pot pies, 85 heritage breed turkeys, and on his 30 tillable acres, about 80 different kinds of garden vegetables, flowers, and herbs. He’s lucky, he points out, because, with all his products destined for Cleaver’s restaurant and catering operation, “I’m only growing for flavor, not to maximize profits.”

Cleaver buys chickens, produce, and flowers from the farm, so her business benefits, especially on “higher price-point items like flowers and tomatoes,” she notes. And while she says “the profit-and-loss on chickens is not that great” they’re doing a little better than breaking even on the birds and it has helped her solve a long-term sourcing dilemma.

“We have a very high bar for product purchasing here,” Cleaver explains; even among greenmarket farmers, sourcing pastured poultry raised on non-GMO feed has not been easy. “You can raise a better chicken if you do it yourself,” she adds.

Yet while expenses are down for the restaurant and catering operation, overall, she adds the farm “is costing more than it’s making,” largely due to money the couple has pumped into infrastructure, including two greenhouses, a barn, equipment, grains, and fencing.

Now, Cleaver and Hollister understand on a deeper level the reason why so many farmers must work off the farm to subsidize it. Although Cleaver hopes to create a locally produced, wholesale chicken pot pie business, the complexities of U.S. Department of Agriculture licensing and poultry processing regulations have kept the project on the back burner for decades.

So for now, they’ll continue operating the farm at a loss, Cleaver adds, especially with so many large-ticket projects left to do, including going off-grid with solar power and dredging the farm’s pond. “Luckily my [catering and restaurant] business are debt-free and we have some savings,” Cleaver notes.

The upside makes it all worth it though. “Being able to have really amazing tomatoes, beans, carrots, and flowers picked in the morning and driven at the restaurant at night is kind of insanely delightful,” says Cleaver of the weekly produce deliveries the Green Table receives from the farm. Recalling a recent dinner for 250 she catered using only Green Table Farms poultry, she adds, “there’s a lot of pride in that.”

To help get up to speed, Hollister spent a year studying biodynamic farming at The Pfeiffer Center in Chestnut Ridge, New York. And he continues to embrace the core principles of the farming technique. Biodynamic farmers see the whole farm as a single, highly interrelated organism, and they see the role of the farmer as orchestrating the land’s cycle of nutrients, growth, life, and decay with very few outside inputs.

While he has had success with row crops like melon, lettuce, peppers, okra, and chard, Hollister says, he’s still working on mastering grain cultivation. Hollister and Cleaver’s goal is to develop a five-acre field of oats, wheat, soybeans and perhaps barley, mainly to feed their poultry. This way, they’ll know where their feed comes from and save the cost of expensive organic feed. But the nuances still elude him.

“Really experienced farmers,” he explains, know how to read the signs in the soil and the crops: “When the soil is deficient in nutrients, they know why it happened and how to fix it. They know when to cultivate and what kind of cultivation is called for.”

The farm has been a step-by-step “a learn-as-you-go process,” Cleaver agrees. One of those steps is experimenting with a new breed of corn, Floriani Red Flint corn, an Italian heirloom variety that makes for delicious polenta. The purchase of Black Spanish and Standard Bronze turkeys from heritage breed poultry guru Frank Reese is another.

Where this experiment in farming will lead, say the couple, is an open question. At some point, Cleaver says, “We had the realization this isn’t a 10-year project, it’s a 20-year project, and we might not have 20 years.” They are already mulling over the question of who will keep the farm going once they retire. And they hope to build a second house on the property for another farmer who will eventually want it as his or her own. “Our goal is to keep the land in farming,” says Cleaver.

The couple’s quixotic adventure has turned out to be almost the ideal project for maximizing the combination of skills Hollister and Cleaver possess. It has also “reinforced in me the need for people to get on to farms and learn about how important it is to care for the earth so that the earth can care for you,” adds Cleaver. “Really getting inside and knowing farming first hand has made me a better advocate for the good food movement.”