Ginseng Gold: The Hidden World of the American Ginseng Root

With a popular reality show and a ravenous Chinese market, ginseng advocates are finding it harder than ever to keep these plants in the ground. 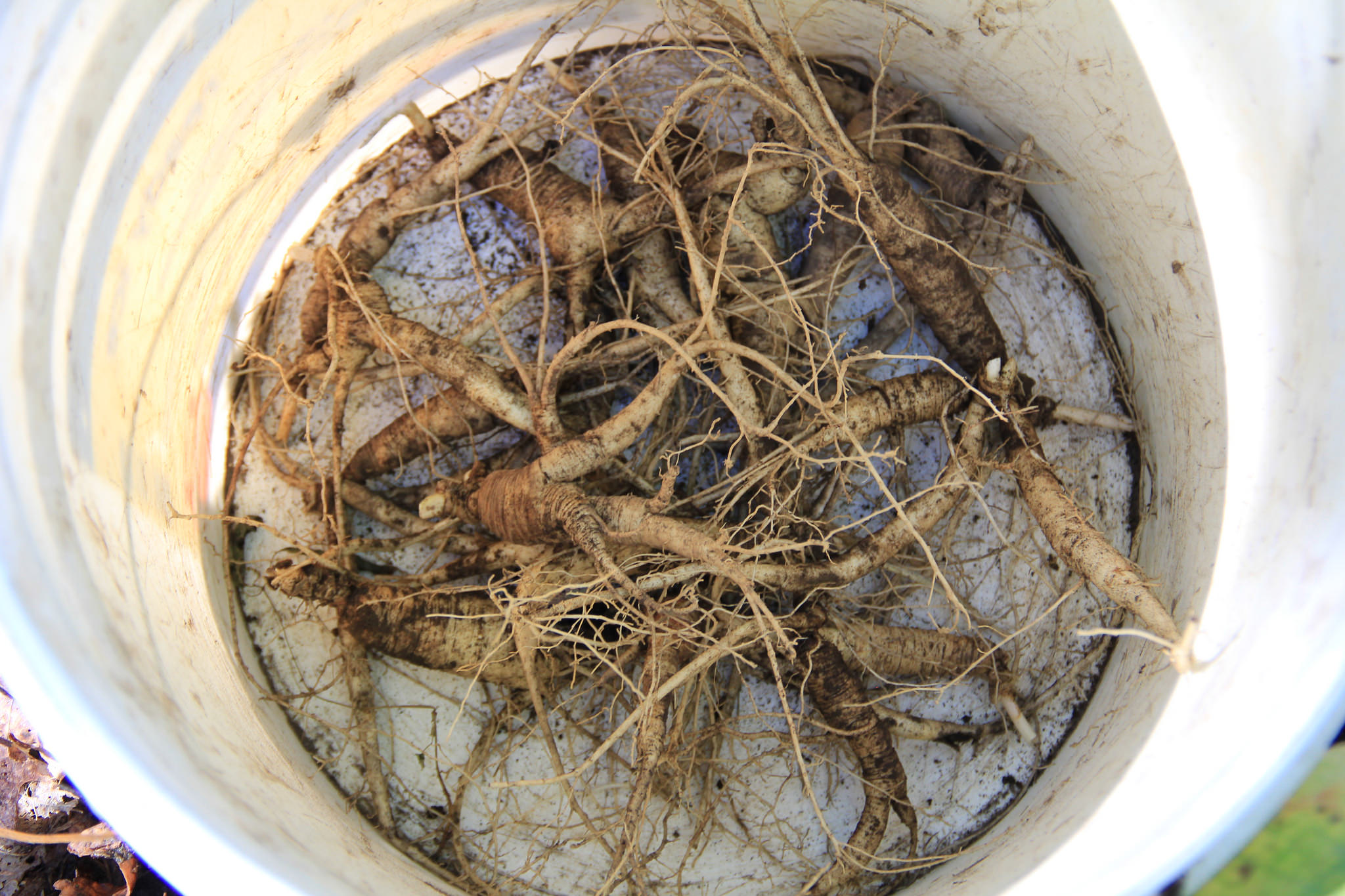 It’s early Saturday as I set out to meet Madison Woods, ginseng expert. She has agreed to meet with me, but has one request: I must keep mum about the exact location of her home in the Ozarks, where wild American ginseng thrives. At first I find her request a bit paranoid, but as I will soon find out, keeping the world of wild American ginseng under wraps has become a necessity.

For many decades, the wild American ginseng root has been a lucrative export, harvested largely in a shroud of secrecy by groups of locals. However, a recent surge in popularity, partly due to a reality TV show about Appalachian ginseng diggers, has introduced the root to a whole new audience. Many in the industry are concerned that all of this attention could lead to its demise, but others contend that further exposure may be the only way to save it.

Woods, a pretty blonde I have a hard time believing is a grandmother, meets me in a tiny town amongst the hills of Northern Arkansas. As her beat-up truck bumps along the rough road to her house, she shares how she first became enamored with this curious root.

Long interested in medicinal herbs, Woods became obsessed with ginseng while living in Louisiana where the heat and humidity make it difficult to grow. Eventually, she relocated to the Ozarks, known for its ginseng-friendly environment. She was ready to make big money growing and selling ginseng.

“At that time I had no practical experience with planting and growing it. I had no idea how difficult it would be to grow enough plants to make sustainable colonies that would support harvesting even one pound of roots annually.” She modified her plan—cultivating just a few ginseng plants and sharing what she learned through her website.

Wild American ginseng, or Panax quinquefolius, is an indigenous perennial found in mountainous regions in the U.S., including the Ozarks of southern Missouri and Northern Arkansas. It’s also a sought-after commodity. Exporters selling it to China can get between $400 to $1,200 per pound.

Though not in danger of extinction in most states, Ginseng is considered “at risk,” in some states meaning that if it’s not protected soon, it could disappear. And because it grows in out-of-the-way spots, there is usually no one around to report illegal diggers.

In the spring, wild American ginseng starts to unfurl, making itself known to anyone looking for it. It grows mostly on slopes among dense shrubs and plants at the foot of trees, and never gets very big. Its dark green stems hold several groups of rough-edged leaves, and by fall, its berries turn a deep red; but the most valuable part of the plant–the golden-brown root—remains nestled underground.

Those in the business refer to harvesting ginseng as “digging.” Currently, 19 states allow ginseng harvesting, though each one has its own rules. Generally, the plant must be a certain age, usually around 5 years old, which diggers calculate by counting how many leaves each prong contains, and it may only be harvested in certain areas.

While most diggers don’t consume ginseng, Woods is an exception. She chews on the root when she needs a bit of a pick-me-up; enjoying its earthy, sweet taste with just a bit of heat. Many believe that it fights fatigue, lowers stress, boosts the immune system and even boosts a man’s libido.

Not everyone is convinced of ginseng’s powers, though. The health food community has embraced the root, but the medical community has been less enthusiastic, mostly due to lack of conclusive evidence. “What we don’t know about ginseng is greater than what we do know,” states Steven Foster, author of Herbal Emissaries. However, that hasn’t slowed the ginseng industry down. Demand for the plant remains high, and for some the ginseng trade means more than just extra cash, it has become a year-round venture.

Woods connects me with Trevor Mills, 31, a soft-spoken digger who is also a dealer—someone who purchases ginseng from other diggers. A few years ago, Mills started digging ginseng while living in Kentucky. He only dug a few pounds the first few years, but he was hooked.

In 2011, Mills relocated to Arkansas, and in 2013, he decided to become more involved in the ginseng business, so he acquired his dealer’s license (required by the state).

Ginseng keeps him busy year-round, but his most active period is in the fall when the digging season begins. (In Arkansas, the season runs from September 1 to December 1.) In mid-September, Mills stops digging and starts buying ginseng and other wild, medicinal plants from other diggers. While many diggers also harvest herbs like goldenseal, at $30 a pound it just can’t compete with ginseng’s high value.

Around the time of the first frost of the year, Hill usually sells his ginseng to a wholesaler. Once it leaves his hands, it may pass through several other wholesalers before it reaches its final destination.

Ninety percent of wild American ginseng ends up in China, where it makes its way to the streets of Hong Kong, which is lined with stores devoted to all things ginseng. A status symbol in the East, the most prized roots are elaborately displayed as if they were high-valued diamonds, according to Foster.

“The Chinese ginseng market is very sophisticated at the retail level, with all grades and types of ginseng, including American ginseng,” he said. However, unlike with diamonds, perfection is not desired; the more gnarled a ginseng root is, the higher the price it may bring. Some customers are willing to pay thousands of dollars for a root the size of their pinky finger.

Wild American ginseng is popular in China because its own native ginseng, Panax ginseng, has been depleted. And, each ginseng offers unique traits—the American variety is more yin, or calming, and the Chinese variety is more yang, or stimulating. Because of the high demand, there is a thriving black market for all ginseng.

In America, the black market has recently been encouraged by the reality show Appalachian Outlaws, which portray the hunt for ginseng as a way to make fast money.

While the show has brought attention to rural Appalachian life, it has also spurred a whole generation of new diggers, many of whom refuse to follow the rules or respect the land.

On the rare occasion a landowner catches a trespassing digger, their call to authorities may go unnoticed, as ginseng takes a backseat to other crops “We’re more likely to be out in a corn or soybean field than deep in the Ozarks,” says Paul Shell, a 14-year employee at the Arkansas Plant State Board.

For some, increasing ginseng’s visibility is the way to help the plant survive. To help get the word out about the root’s historic, ecological, and economic importance, Woods is spearheading a ginseng sanctuary at Compton Gardens in Bentonville, Arkansas. Here, she is creating a wild-simulated ginseng habitat of 20 ginseng plants, along with its companion plants and trees. Woods hopes this introduces a whole new audience to the medicinal root.

“The more people who are aware about ginseng the better,” says Woods. She is hopeful, that the ugly little root will win over the public and maybe, just maybe, take up a little space in their hearts.

Monica Johnson is a freelance writer, co-owner of Hudson Farms, in Deep East Texas and founder of Sacred Seed, a non-profit that focuses on sharing the importance of food with children. Visit her website for more information. Read more >