Can This Queen Breeder Save the Bees? | Civil Eats

Can This Queen Breeder Save the Bees?

If honey bees are going to survive, they'll need hearty queens. That's where breeders like Melanie Kirby enter the picture. 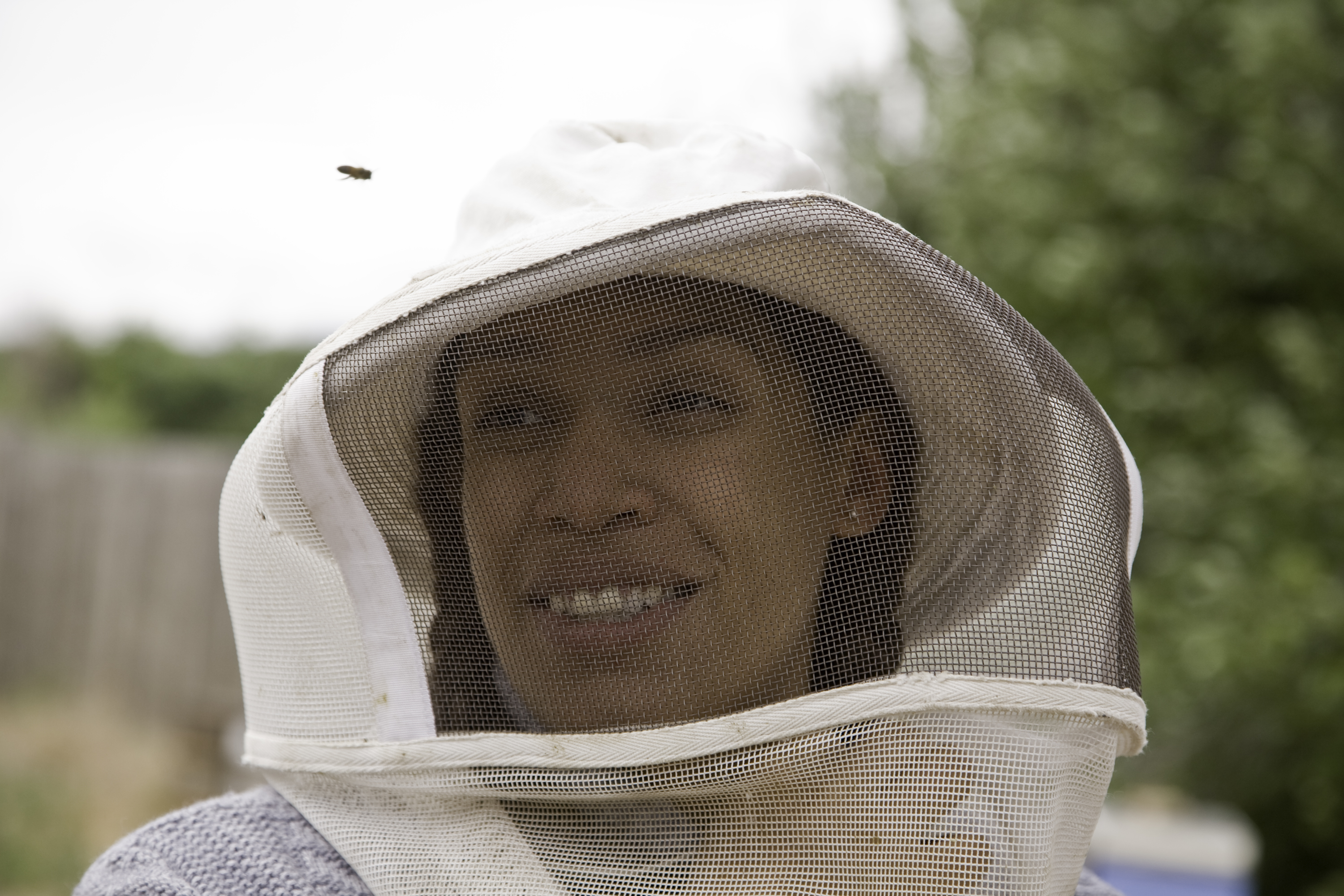 At the base of the Truchas Mountains in northern New Mexico, Melanie Kirby and her partner, Mark Spitzig, operate the Zia Queen Bee Farm and Field Institute, a queen bee breeding and production business. Their 250-some hives dot the canyons, deserts, and alpine meadows along the Rio Grande Valley. They call their bees “survivor stock,” a term that is growing in the industry, but which has no official definition. Generally, survivor stock refers to bees that can survive without pharmaceuticals and can defend themselves against pests like the varroa mite. Some bees may be genetically resistant to varroa, while others have hygienic behaviors to keep mite populations in the hive under control.

In 2006, beekeepers around the world reported large numbers of honey bee hive deaths, attributed to the vaguely-defined Colony Collapse Disorder or CCD. While bees continue to die at alarming rates—42 percent of hives died in the U.S. this past winter—we are beginning to get a better handle on what’s hurting them. It seems a convergence of factors—from habitat loss and degradation, pesticides, diseases, and pests like varroa—have all contributed to the honey bees’ decline. Raising bees to be naturally hardy gives them a leg up in today’s challenging environment. We talked with Kirby about what it means to be a small-scale bee breeder and why hardy survivor stock is important, particularly with the rapid increase in the popularity of beekeeping across the country.

You are a queen breeder as well as a queen producer. What’s the difference?

Producing bees means helping the natural cycle to reproduce bees for other beekeepers. A queen bee breeder is not only making bees, but also selecting, testing, and conducting specific grafts to promote specific strains.

What kinds of qualities do you look for?

If a hive goes untreated and varroa mites get to them…[susceptible hives can] crash. We select hives whose mothers have made it through two winters.

Varroa destructor is a parasitic mite that latches on to the bees and sucks their hemolymphs. They are also vectors, so they pass diseases. They are one of the main culprits for hive losses, and beekeepers have been trying to deal with them since the 1980s. Queens that have made it through two winters have proven themselves to be pest-disease resistant.

Is that what you mean by “survivor stock”?


Above and beyond [making it through two winters], we look at gentleness, productivity, pest-diseases resistance. There isn’t a clear definition. For the majority of [beekeepers], when we speak of survivors, we’re talking about resistance—those that are able to make it without any beekeeper-applied miticides. I would like to make a firm definition so that no matter where you are, it’s understood what that means.

How is your selection process different from conventional practices?

Most conventional setups purchase mated queens or invite an instrumental inseminationist, who is like a bee geneticist, to bring semen from certain strains and inseminate queens. Then those queens are used as mother breeders. Instrumental insemination is a fabulous breeding tool. Instead of nature selecting over millennia, we can speed up the process. But it’s also limiting; open-mated queens are known to last longer.

There are different races of bees—some can handle different conditions better than other. New Mexico is unusual because it has seven climactic zones from desert to tundra. We expose our bees to the variety of conditions. They have to be quite adaptable. We move them around, so they’re down in the valley, in the canyon, on the mountain—they go through the whole gamut.

We continue to introduce new stock [from beekeepers who are raising survivor stock across the country.] Our stock changes every year as we introduce and retire various crosses. That lends to hybrid vigor and helps establish a more diverse genetic “toolkit” by which the bees are able—I feel—to adapt and transcend regional boundaries.

How do you produce a queen?

Hives raise new queens under three conditions: If a queen dies; supersedure (meaning the hive decides they want to replace her, but she’s still present) and when they want to swarm. We look to replicate the ideal scenario. We conduct a graft, which is similar to plant grafting except there’s no slicing and dicing. It’s just transferring of larvae.

Queens are fed royal jelly, not only as larvae, but for the rest of their lives. Royal jelly is comparable to colostrum or breast milk and is produced by nurse bees. Having that diet alone is what produces queens and allows them to live a few years—everyone else lasts just a few weeks to a few months. It takes a little over two weeks—15 and a half days—to produce a virgin queen.

Before the new virgins emerge from their cocoons, they are each placed in a mating nucleus hive and will then mate with area drones. After a queen emerges, she conducts mating flights within a few days. She can mate with five to 80 drones—the more the better, because it provides the hive more story in the genetic toolkit.

The second week is when that queen will begin to lay eggs. Many producers will go in during that second week, see an egg, and say she’s ready to go. We wait 21 to 28 days. The optimum is 35. The longer you wait, the [more likely the queen that hatches will be accepted in the hive]. They’ve found that queens that were harvested under 17 days have close to a 50 percent chance of being superseded—of being replaced.

How did you learn to rear queens?

I knew I wanted to do the Peace Corps, and to have a rugged experience. So my assignment was beekeeping in Paraguay. Later, I ended up in Hawaii and was there for five years. I worked for Hawaiian Queen for a season, and then at Kona Queen, which is one of the world’s largest producers, for four years. All in all, I was on the island for five years doing queen rearing.

What changes have you seen in the beekeeping world since you started and what new challenges have those changes introduced?

A few years ago I would say, “beekeeper” and people heard “bookkeeper.” Now, there’s a lot more interest, which is great, but it’s hard to convey very succinctly what’s going on. Beekepers have often been clique-ish, private people. Now we’re seeing everyone from hippies to lawyers. There are a lot of different perspectives and a lot of naivety.

The beekeeping renaissance is a good thing. More people are wanting to become aware and wanting to reconnect with nature. However, native bees aren’t getting the [attention] they really deserve. And, while we do need more beekeepers and more farmers, there’s an over-saturation in certain urban areas, at least here in New Mexico. There is also over-saturation in rural areas—places with larger scale operations.

In New Mexico, we don’t have a lot of local or even regional queen production, so we’re getting a lot of imports from other places and they are coming in with compromised genetics. This might be Africanized bees, which are awesome in their own right, but are highly aggressive. There’s also stock coming in from high-production zones with exposure to a lot of nutritionally compromised forage and toxic residues from pesticides.

People mean well, but they just click-and-ship. It’s the American consumerist perspective where you want what’s cheap and available and gets shipped to your door. And we’re importing a bunch of problems. Bees, unlike chickens, don’t just forage a few feet around; they fly and can forage up to miles. When mean bees or bees with poor genetics are introduced, it impacts the genetic pool. Those seeds, like invasive plants, are going to spread and can become a negative thing.

Because the learning curve is so [steep] and because it’s hard to know how interconnected things are, new keepers may not realize what’s going to be a problem. Don’t blame the big operations for applying chemicals, but then go order a package of bees from those very same people. It’s hard to see the whole trail, the schematics of how it all hooks up—how small beekeepers, the commercial guys, the industry, the research, how everyone plays into it together and how interconnected we all are.

Katherine Mast is a freelance writer in Santa Fe, New Mexico. She covers science, environmental issues and food systems. Her work has appeared in High Country News and Modern Farmer, and she is a regular contributor to Edible Santa Fe. Read more >