An influential chef and cookbook author shares an inspiring story about managed grazing, carbon sequestration, and renewal from her home in New Mexico. 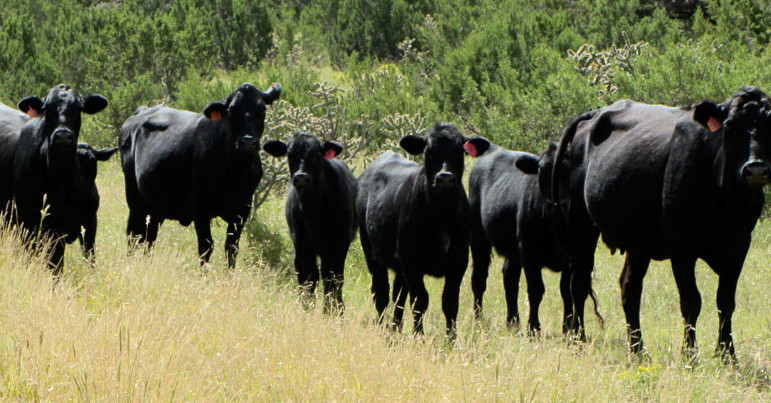 Ever since Joel Salatin of Polyface Farm told Michael Pollan that he was a first and foremost a “grass farmer,” in one of the most well-known chapters of The Omnivore’s Dilemma, the term has become commonplace among pasture-based farmers and ranchers working to raise animals on healthy grasslands. But what does it mean to farm grass in the American Southwest?

New Mexico, where I live, is an arid state. Ranching is traditional here—cattle and sheep have long been raised in large numbers. Like all cows, they start out eating grass in a pasture, but most put on their final pounds in feedlots where grain adds weight and the familiar flavor and tenderness that many people associate with beef.

Over the last few decades, a group of Southwestern ranchers have been returning to another approach. More than withholding grain from the cows’ diets, however, these ranchers must maintain healthy, living pastures. Doing so involves a number of new practices that, when followed, can radically change land health for the better.

In fact, it might well change the idea that grazing animals are bad for the land, a sentiment I still hear expressed often that originated in the environmental community in the 1960s—and with justification at the time when cattle were poorly managed especially on public lands. As with all things, the devil is in the details.

Nancy Ranney, of Ranney Ranch in Central New Mexico, has been grass farming since early on, and she’s seen her family ranch change. From l968 until 2002, her dad’s ranch was strictly a cow-calf operation, meaning its primary goal was to produce calves for sale. This type of ranch is typical in New Mexico, and the cattle were run over the entire ranch. Now, it produces beef that’s certified by the American Grassfed Association, which means that the cattle spend their entire lives on grass.

“By 2003, we were seven to eight year drought cycle,” Ranney explains. “We had a monocrop of blue gramma grass. It’s a good native grass for the area, but a monoculture is never good for resilience and there are many native grasses. It was time to change.”

So Ranney Ranch shifted to planned, rotational grazing. They established 19 pastures on the land—with the smallest being about 22 acres, the largest 2,000 acres—and divided the cattle among them into small herds. That model has since changed. There are now 32 pastures, but the entire herd grazes on each pasture at one time. “We may spend a day in the smallest, and three weeks in the largest. But all the pastures are rested for a minimum of nine months a year and some are rested longer,” she says.

Ranney and the ranch manager, Melvin Johnson (“the man who makes it all happen”), monitor the grass intensely, making sure that the cows don’t eat more than half of what’s growing in each pasture. The animals graze all the grass in a single pasture about halfway down before they’re rotated. “It’s all about the intensity and the time element, which was especially crucial in the beginning,” says Ranney. Today they have a pretty good sense of how long the herd can spend on each pasture, but at first they really had to keep an eye on the grass and how quickly it was being eaten down.

Giving pastures a long rest each year and implementing practices that keep water on the land has made a huge difference. “In three years we went from four to five species of native grasses to 30, without planting seed or irrigating. Among them were cool season grasses, which people said we couldn’t grow. But every year we see a new cool-season grass come up,” she reports. A variety of grasses also provide a wider range of nutrients for the cattle.

Cool season grasses are important because they come up a month before the others and stay up long after warm-season grasses die out, which extends the grazing season. And in the winter they hold onto their protein content so they’re good forage for the cattle. “Now, after 12 years, we’ve counted 45 species of grasses,” says Ranney. “Even when we were in severe drought (2- to 4-inches rainfall per year instead of 10 inches) we did okay.”

A diversity of grass species is more resilient to the stress of drought because they can weather better. “We don’t have to cut back so much on our herd count during deep drought, and we can build it back while other ranchers are still de-stocking,” says Ranney. Growing a range of grasses also promotes a diversity of microorganisms in the soil. “It’s all about the life in the soil,” Ranney says, and she’s adamant about it.

The movement of cows’ hooves in the soil help “open up” the soil and Ranney says that as their droppings are integrated, it also allows the microorganisms in their guts to fertilize the land, making for richer soil, which in turn holds more moisture.

“This cycle allows us to retain more water in the soil which means that we have cooler soil—critical in the dry southwest,” says Ranney. She adds that she has seen the carbon in the soil at the ranch increase by at least 25 percent. “For every 1 percent increase in soil organic carbon, you can hold an additional 60,000 gallons of water per acre. Some of this water re-enters the water table and about 70 percent goes into the aquifer.”

The Quivira Coalition, a Santa Fe-based environmental nonprofit, holds regular workshops to help ranchers learn to build soil that holds more water, and Ranney Ranch has worked with experts in this area.

One area that is usually given scant attention is road design. Well-designed roads don’t channel water down tire ruts to the nearest big arroyo, or creek, where it drains off the land. Good road design throws the water back onto the land.

“As a result of work we did on 14 miles of ranch roads, we’ve retained an additional 14 million gallons of water on the land,” Nancy reports. “That’s a lot of water!”

Another practice that ranchers in this area take on is the removal of thirsty juniper trees—pulling them up by the roots, rather than just cutting them down. How much water can that keep on the land? Nancy thinks it has helped her retain over 1 million gallons per acre. And the wood itself can be used for biofuel, biochar, or pellets that can also be used to enrich the soil. Juniper could also possibly fire power plants in New Mexico where dirty coal-fired power plants are still in use.

Another side effect of raising grass is that the practices are a boon for wildlife. “The grasses benefit the deer, small animals, bobcats, birds,” says Ranney. The ranch uses Stock ponds which get tamped down so that they hold water longer. “The cattle come to one corner of them; wildlife flocks to the rest.”

The mesas in the area are also home to mule deer, wild Barbary sheep, foxes, bobcats, coyotes, and mountain lions and in addition, over 15 species of bats and 50 species of birds.

Ranney points out that 40 percent of the earth’s surfaces are semi-arid grassland, similar to New Mexico. “If it were well-managed with respect to grazing, we could be taking care of our carbon emissions while producing quality food, whether beef, sheep, or goat.”

This is not the only Southwestern ranch I’ve visited that has employed at least some of these techniques. The Southwest Grassfed Livestock Alliance connects farmers from around the Southwest who share these practices and principles. Many are returning water, lush grass, and carbon sinks to formerly damaged lands. It’s very encouraging to see such remediation of dry earth accomplished with fairly simple techniques.

Deborah Madison is a chef, writer and cooking teacher who has been called an expert on vegetarian cooking. She is the author of 10 cookbooks, including Vegetarian Cooking for Everyone, Local Flavors, and most recently, Vegetable Literacy. Read more >