‘540 Meals’: A McDonald’s Infomercial Coming to a School Near You

A high school teacher claims he lost weight eating only McDonald's food for 90 days. Now McDonald's is showing his film in high schools around the nation.

McDonald’s has come under fire in recent years for its incursion into schools through various charitable, educational and anti-bullying programs. While the company says these programs promote “children’s well-being,” critics see them as stealth marketing tools for a captive, impressionable audience.

But now the company has created a new documentary for use in middle and high schools which promotes the McDonald’s brand so aggressively, it can hardly be called “stealth” marketing. Instead, it’s a veritable infomercial for the beleaguered fast food chain.

540 Meals: Choices Make the Difference documents an experiment conducted in 2013-14 by John Cisna, an Iowa high school science teacher, who sought to discredit Super Size Me by eating nothing but McDonald’s for 90 days and losing weight in the process. He says in the film that “this was all generated by the kids [his students],” but he admits in his self-published book, My McDonald’s Diet: How I Lost 37 Pounds in 90 Days and Became a Viral Media Sensation, that he actually hatched the plan himself after eating dinner with a friend (who happens to be a McDonald’s franchisee).

Cinsa turned the experiment into a high school project by enlisting three of his students to create his daily McDonald’s menus. These were capped at 2,000 calories, met the Daily Value for 15 (unspecified) nutrients and included every item on the McDonald’s menu at least once. Cisna also added a regular 45-minute walk to his formerly sedentary routine. By the end of the 90 days, Cisna had lost 37 pounds and his blood work was improved. He decided to continue for another 90 days, adding more intensive exercise, and achieved a total weight loss of 56 pounds. 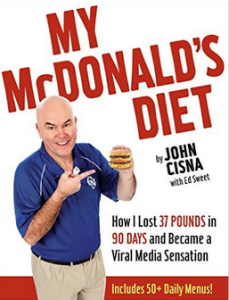 Whatever the pedagogical purpose of the experiment, Cisna seems to have understood from the outset that his story would be catnip to both news outlets and McDonald’s. His franchisee friend supplied all of his McDonald’s food for free, and Cisna filmed his own amateur documentary about the experience which he posted on YouTube as: “Manages To Lose Weight And Lower Cholesterol With 90-DAY MC DONALD’S DIET.”

Local news media soon expressed interest, on which Cisna offered punchy sound bites like, “It’s our choices that make us fat, not McDonald’s.” He posted these local news stories on YouTube, again using clickbait titles like “Eats Nothing But McDonald’s for Three Months LOSES 37 POUNDS,” and eventually came to the attention of the Today show and Good Morning America.

McDonald’s has since officially retained Cisna as its paid brand ambassador and he now travels around the country to promote the fast food chain to middle and high schoolers, as well as dietetic students.

No one from McDonald’s media relations department or its PR firm would talk to me* about Cisna, 540 Meals, or anything else associated with this new school program, nor is there any mention of Cinsa or the film on the McDonald’s corporate website. But it’s clear that at some point Cisna turned over the raw footage from his homemade documentary to McDonald’s, which then hired a commercial filmmaker to add voiceovers, music, and on-camera interviews to create 540 Meals.

You can watch the entire 20-minute film here.

McDonald’s has created an official Teachers Discussion Guide for use with the film, at least half of which is devoted to discrediting Super Size Me. The corporation also prepared a form letter to be sent out to schools by registered dietitians acting as paid McDonald’s “Nutrition Consultants.” In August, a group of Tri-State-area McDonald’s franchisees sent out their own press release to promote the film.

So what’s wrong with screening 540 Meals in schools?

It’s true that anyone will lose weight on a fast food diet if they consume too few calories to maintain their weight, just as anyone eating only “clean” food will gain weight if they eat too many calories. But 540 Meals is hardly a neutral lesson in calorie balancing. Instead, it instills in children as young as age 11 the explicit and potentially harmful message that “There’s nothing wrong with fast food. There’s nothing wrong with McDonald’s.”

Here are some specific concerns raised by the film:

Unlike Morgan Spurlock, who was in good physical shape at the start of Super Size Me, Cisna weighed 280 pounds when his experiment began. This Institute of Medicine calorie calculator indicates that Cisna likely required over 3,150 calories a day just to maintain his elevated weight, which explains his rapid weight loss on 2,000 calories a day.

But what about a 5′ 3,” 120-pound, sedentary high school girl watching 540 Meals in science class? She’ll gain weight if she exceeds 1,700 calories a day—not many more than the 1,440 calories in a single McDonald’s meal of a Big Mac, medium fries, and a small chocolate shake. Cisna would likely respond that 540 Meals will teach this hypothetical girl to be more careful in choosing McDonald’s items to meet her lower caloric needs, but there are two problems with that response.

First, neither 540 Meals nor the discussion guide ever offer young viewers the critically important disclaimer that “Your calorie needs may be significantly lower than John Cisna’s,” nor do they even discuss how one might go about calculating one’s daily caloric requirements. Instead, students are left with the vague but reassuring message that “choice and balance,” along with a 45-minute walk (which might burn off about 1/5 of a Big Mac) will allow them to eat whatever they want at McDonald’s on a regular basis. After all, Cisna tells kids:

Some of the skeptics said, “Well, he only ate salads.”  No. I had everything. I had Big Macs, I had the Habanero, I had Quarter Pounders with Cheese, I had ice cream cones, I had sundaes. And what’s really amazing, that people find unbelievable, is probably 95% of every day, I had French fries. I love French fries and that was a great part of it.

But here’s the real kicker. Even Cisna wasn’t able to eat everything on the McDonald’s menu while sticking to the diet plan he so carefully outlines in the film. Under the skeptical eye of Today show dietitian Joy Bauer, Cisna admitted (at the 3:30 mark) that on days when his student menu planners required him to eat more highly caloric McDonald’s entrées, it was impossible to consume a total of 2,000 calories without also exceeding his Daily Value limit on fat.  So for 21 out of the 90 days—almost a quarter of the experiment—he had to limit his calories even more severely, dropping down from 2,000 to 1,750. That’s a very low daily intake for a man of his considerable height (6 feet) and weight, but this relevant information is never disclosed in 540 Meals.

While Cisna is correct that calorie balancing is possible even at McDonald’s, studies have found that providing customers with calorie information in fast food settings generally doesn’t produce healthier choices—even when calorie counts are posted right on the menu board. Whether it’s due to the aroma of crispy, hot-from-the-fryer French fries or the sight of everyone around them eating juicy burgers, so few McDonald’s customers order salads that they account for just two to three percent of McDonald’s total sales.

As dietitian Bauer cautioned in the Today show report on Cisna’s experiment, “most people wouldn’t be able to mimic Cisna’s outcome because when faced with a fast food menu, they’d be too tempted to order a huge hamburger. . . ” Yet even in the midst of a childhood obesity epidemic, 540 Meals irresponsibly encourages notoriously impulsive pre-teen and teenaged kids to frequent McDonald’s—with all of its powerful sensory cues and unhealthful offerings—even more often than they already do.

No Discussion of Nutrition

Then there’s the issue of nutrition. During the 90-day experiment, Cisna refers to McDonald’s as his “grocery store,” implying that it offers a wide array of healthful foods, and he tells viewers frequently that his students were consistently tracking 15 nutrients. But 540 Meals never informs students that Cisna’s regimen was a far cry from the generally accepted definition of a healthful diet, i.e., one rich in whole grains that contains five to nine daily servings of fruits and vegetables. (French fries don’t count.)

Cisna rebuts this concern by pointing to his improved blood work, but as dietitian Bauer correctly pointed out on the Today show, “If you lose weight and you’re overweight to begin with, normally your cholesterol, your blood sugar, your triglycerides, they will come down, too.” In other words, Cisna’s blood profile improved despite the relatively poor nutritional quality of the food he was eating, not because of it.

Furthermore, according to Bauer, Cisna’s all-McDonald’s diet resulted in his consuming double the amount of sodium recommended for adults on a daily basis. This means he was only able to make his reassuring claim about “tracking 15 nutrients” by deliberately omitting sodium from the mix, even though it’s one of the main “nutrients of concern” in the American diet. But Cisna’s nutrient cherry-picking is another piece of relevant information that’s never mentioned to young viewers of 540 Meals.

“The Greatest Ad In the History of Mankind for McDonald’s”

Finally, of course, there’s the troubling prospect of aggressive McDonald’s brand promotion infiltrating middle and high schools under the guise of “health education.” Branding expert Abe Sauer, the only other person to have written about 540 Meals to date, summed it up well: “[It sounds] suspiciously like McDonald’s is looking for an edu-washed marketing campaign to get its brand in front of impressionable young minds with a tacit endorsement from authority figures.”

Still, though, it’s easy to see why McDonald’s would jump at the chance to exploit 540 Meals and close-up-ready Cisna for all they’re worth. After enduring a long period of declining sales, especially among young adults, the 540 Meals program must seem like a promising way to stimulate teens’ desire for McDonald’s food while inoculating them against the widely held belief that eating it regularly is bad for one’s health.

By the way, part of that inoculation actually includes Cisna tweaking a Mark Twain quote (shown below) and telling kids they shouldn’t trust any negative information about fast food or McDonald’s they might encounter on the Internet (14:05 mark): 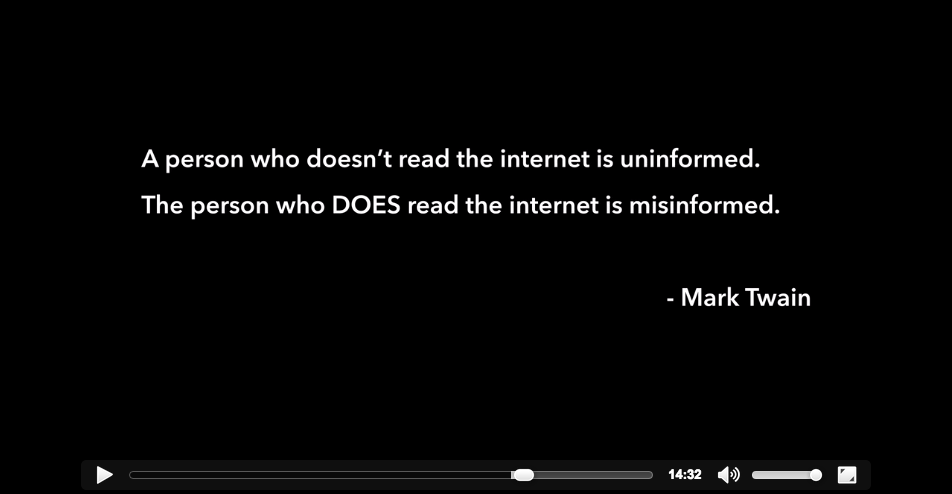 Back when Cisna’s experiment was just starting to garner headlines, and well before McDonald’s turned it into an in-school program for impressionable kids, pundit Cenk Uygur rightly called it “the greatest ad in the history of mankind for McDonald’s.” Uygur went on to add, “This whole thing’s been a giant ad for McDonald’s, because you know what I want to do right afterwards? Go get a Big Mac.”

* I first learned of 540 Meals last month, when I was given a packet of materials about it prepared by a McDonald’s franchisee. I emailed a list of questions about the film to Golin, the PR firm retained by McDonald’s to oversee the company’s 540 Meals school outreach program. After receiving no response, I next contacted both Lisa McComb, Director of Media Relations at McDonald’s USA and Rebecca Hary, the company’s Director of Global Media Relations. But despite the company’s recent claim that it wants to be more transparent, neither McDonald’s executive responded to my repeated emails and phone messages seeking comment.