Where is the line between vocational training and exploitation? 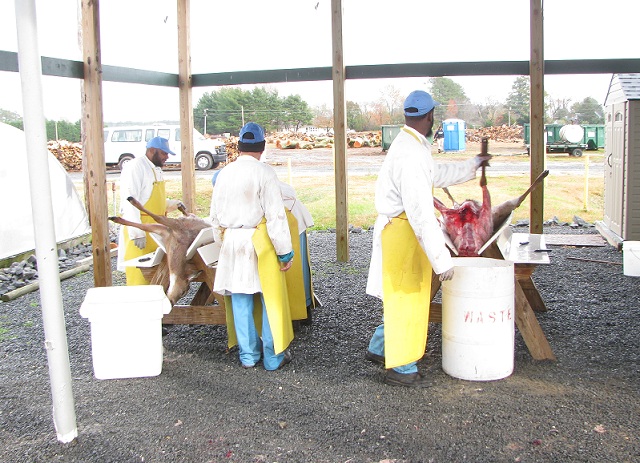 The butchers-in-training are incarcerated at the Sussex County Community Corrections Center in Georgetown, Delaware. They work in the jail’s meat processing plant as part of a vocational training program.

The corrections center added a meat processing facility in 2009 at the request of the Delaware Department of Natural Resources. The launch of a statewide program to control the local deer population created a need for butchers to process the carcasses (the meat is donated to local food banks). Without enough local meat cutters to meet the demand, the DNR hoped incarcerated people could fill the gap.

“It presented an opportunity for offenders to learn basic butchering skills and develop a work ethic,” explains Joe Adkins, correctional lieutenant for the State of Delaware.

Since training began, more than 160 people have participated in the program, processing up to 100 deer per month in a makeshift butcher shop outfitted with equipment provided by the Delaware Department of Natural Resources.

The program has proven popular; there is a waiting list of more than two dozen men hoping to learn meat processing skills while serving out their sentences in the level 4 facility. But the need for trained butchers extends beyond the barbed wire of a state prison.

Even though the demand for local meat is increasing, the number of butchers is declining nationwide, making it harder to turn cows and pigs into prime cuts of beef and pork. The U.S. Bureau of Labor Statistics estimates a need for more than 16,000 butchers by 2018. And while these programs might train people to be butchers outside prison, they are also currently filling a widening skill gap with very low-cost labor.

Census data indicates that immigrants fill almost one-third of meat processing jobs–the number could be much higher due to the use of undocumented workers. While meat processing pays more than other low-wage food jobs (an average of $13.70 per hour, according to BLS), it’s physically demanding and often dangerous work.

In Minnesota, where an Agricultural Utilization Research Institute survey found that two-thirds of butchers at small meat processing facilities are at retirement age and most have no succession plans in place, Representative Jason Metsa (DFL-Virginia) believes prison inmates can fill the shortage.

Earlier this year, Metsa introduced a bill that would establish a formal curriculum at Northeast Regional Corrections Center in Saginaw, Minnesota, where inmates are already working in an onsite meat processing facility. Farmers in the area, according to representative Metsa, depend on people living in the minimum-security facility to butcher livestock because there are few other resources in their rural area. He told the Minneapolis Star the idea resulted from a need to find, “creative ways to attract more farmers to our area.”

Coupled with the formal curriculum, the Northeast Regional Corrections Center has requested the development of a $1.2 million USDA-inspected meat processing facility on its campus. Representatives declined requests for an interview but the Minneapolis Star article noted that the proposed plant would provide a state-of-the-art training facility and meet the need for USDA-inspected meat processors in the area. (Nationwide, the number of USDA-inspected slaughterhouses dropped from 1,200 in 1990 to 800 in 2010.)

Although there is a need for butchers, prison labor is a complex issue. During incarceration, workers generally earn much less than the federal minimum wage of $7.25 an hour. UNICOR, the government agency that manages prison labor, says most inmates earn between 23 cents and $1.15 per hour.

In 2014, Whole Foods was lambasted for selling products produced by inmates, which critics argued provided an unfair advantage over companies required to pay the minimum wage and exploited prisoners who are unable to organize for fair wages and working conditions. Earlier this week, Whole Foods announced that it would stop selling products like tilapia and goat cheese produced through a prison labor program in Colorado.

“It’s a human rights issue,” notes Joann Lo, co-director of the Food Chain Workers Alliance. “Some of these programs have good intention of providing inmates with job skills, but offer none of the respect that people deserve for their labor, namely guaranteeing minimum wage, a choice in how their wages are spent and a voice in their working conditions.”

William Oettel, warden at the Sussex County Community Corrections Center argues that the program is an important step in helping offenders secure employment upon their release. “The training we do here sets them up to get an apprenticeship in a butcher shop or supermarket,” he says.

People working in the butcher shop at Sussex County Community Corrections Center earn minimum wage ($8.25 per hour in Delaware) but the butchers-in-training don’t collect a paycheck at the end of the week. Instead, their wages are applied toward court fees and other fines imposed during their sentencing.

At least two have found full-time jobs in butcher shops, but Adkins notes that the number could be much higher because the prison doesn’t track offenders post-release. Their sentences, which range from 30 to 90 days, are too short to qualify for a vocational certificate, but Adkins hopes that will change.

“For now, we’re teaching them the basics but we’re actively looking for an accelerated curriculum that [inmates] could complete during their sentences,” he says. “We want them to have pride in what they’re doing and a feeling that it could lead to a new path.”