Pro-labeling groups—and the organic food companies supporting them—are spending money to lobby for GMO labeling. But does it come close to what big food and agriculture companies are shelling out? 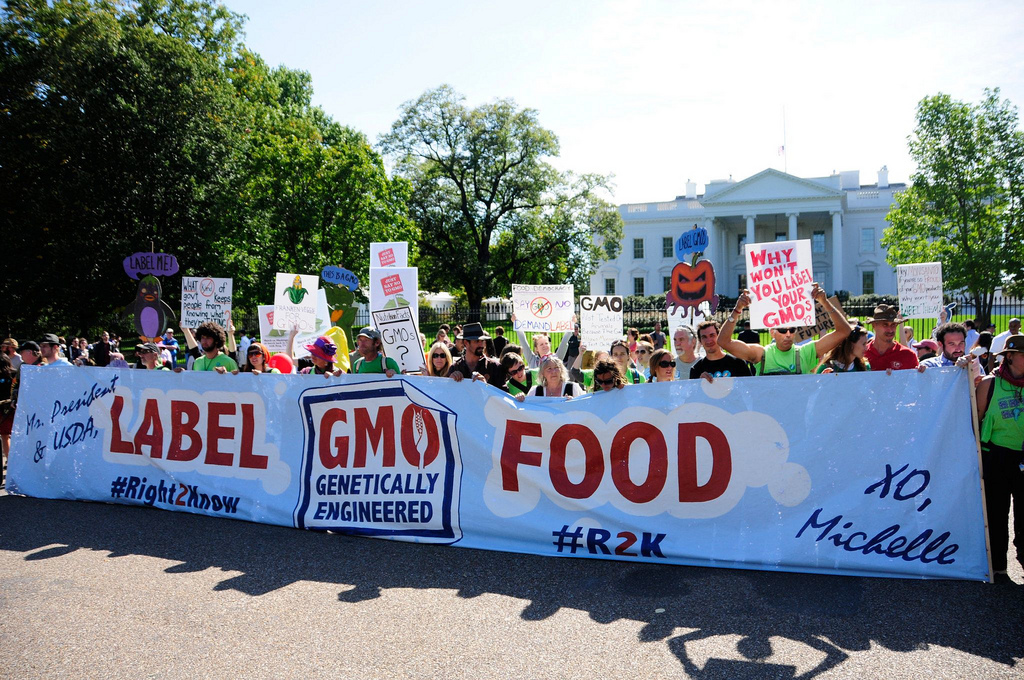 The debate being waged over whether or not to label genetically engineered (GMO) foods is an especially contentious one. On the floor of Congress, in the news media, in the halls of academia, and on social media sites, pundits on both sides are weighing in, taking pot shots, and resorting to a range of tactics to support their arguments.

The fight has become especially heated since late July, when the House of Representatives passed H.R. 1599—known by its proponents as the Safe and Accurate Food Labeling Act of 2015, and by its opponents as the “DARK (Deny Americans the Right to Know) Act”—which would block GMO labeling at the federal level.

Are both sides spending big to win the fight? Not exactly.

As we’ve reported, while the precise amount spent by the food and agriculture industries isn’t possible to tally*, an August estimate by the Environmental Working Group suggests that the number could be as high as $51.6 million for the first half of 2015 alone. This figure comes from federal lobbying and disclosure declarations filed by spenders that include the Grocery Manufacturers of America, Coca-Cola, PepsiCo, Monsanto, DuPont, Kellogg, Kraft, and General Mills.

In response to this reporting, some have suggested that labeling proponents, i.e., organic and non-GMO food companies, are spending nearly as much in an effort to bolster their own products. Curious about these numbers, we decided to take a look at what companies and groups in favor of GMO-labeling have spent. Here’s what we found.

A number of companies backing the JustLabelIt campaign, a collaborative effort of organizations and businesses working to label GMOs—Amy’s Kitchen, Applegate, ClifBar, Dr. Bronner’s, Happy Family, Late July, White Wave/Horizon, and Stonyfield—provided figures directly to Civil Eats, as did the Organic Trade Association (OTA) and U.S. Right-to-Know. Organic Valley’s information is posted to its website and all other organization spending is based on federal lobby and disclosure forms posted by the Center for Responsive Politics to its OpenSecrets database.

Where is this money going? The JustLabelIt campaign, OTA, and Organic Valley have all engaged professional lobbyists. But none of the other companies listed above use lobbyists or lobbying firms.

Organic Valley’s government affairs director Missy Hughes said the company has, through the OTA, worked with the Podesta Group, but not on GMO-labeling issues. OTA’s CEO and executive director Laura Batcha explained that the organization “engages outside representation as appropriate on specific issues.”

The other half-dozen companies supporting JustLabelIt take a less formal approach. In the case of Stonyfield, for instance, director of organic and sustainable agriculture, Britt Lundgren described her company’s anti-GMO efforts this way: “I occasionally go to D.C., usually as part of an event organized by JustLabelIt or the Organic Trade Association. Or if there’s something moving on the Hill, [I respond] by making a lot of phone calls.”

In comparison, many of the big food and agriculture companies and trade groups opposing GMO-labeling have hired Washington lobbying firms, including several that specialize in Republican and agricultural politics. Among these are Fierce Government Relations (whose clients include Coca-Cola, Grocery Manufacturers Association, and Dow Chemical).

Another example is the Russell Group, which has represented Kraft Foods, Hormel Foods, and Cargill, and whose principals include former Republican administration high-level agriculture department staffers. Another firm, FP1 Strategies, was, as of December 2014, working for the Coalition for Safe Affordable Food, the consumer outreach effort initiated by a number of the companies and trade groups lobbying against GMO labeling. FP1 Strategies, like the Russell Group, is well connected in Republican political circles; its founding partner, Danny Diaz, is now on leave to work on Jeb Bush’s presidential campaign.

Several of the same businesses and trade associations also contribute—along with Koch Industries and the American Chemistry Council—to Congressman Mike Pompeo (R-Kansas), the lead sponsor of H.R. 1599. Individual staff members from the Russell Group and Fierce Government relations have also given to Pompeo’s campaigns.

Not only would H.R. 1599 negate state and other local bills requiring GMO labeling, but it would also undermine existing voluntary GMO labeling efforts, preempt local laws about GMO crop production, and allow the inclusion of GMOs in food that are labeled “natural.” Given the waning days of the 114th Congress, however, the bill’s fate remains uncertain.

In the meantime, sales of organic food—which is free of GMOs by law—continue to grow, up 11 percent between 2013 and 2014, a signal of consumers’ desire to know how their food is produced. “At its heart, organic is about transparency. We think the more information the better,” says Organic Valley’s Hughes.

And this is something all the companies aligned with JustLabelIt say their audiences value. “Our customers are very concerned about GMO labeling and value having increased access to information about their food,” Late July Organic Snacks marketing manager Kaelin Merrihew told Civil Eats.

“Even though we’re outspent in dollars and outspent in advertising and in access to and influence of the media, I’m very pleased to say that science-backed truth is emerging,” he added. “GMOs have led to a complete and radical sea change and increase of our use of herbicides,” Hirshberg said. The result, “is a whole cascade of problems,” among them herbicide-resistant weeds, herbicide run-off, and drift.

The other bottom line for the pro-labeling side is access to information. “In the long run, [obfuscation] is not a very good competitive strategy in 2015,” says Hirshberg. “People want to know more.”

* Federal lobbying and disclosure declarations filed by registered lobbyists show money spent on GMO issues, but these are often bundled with other spending, so exact numbers are not publicly available.

Note: This article was updated to include both the publicly disclosed spending numbers and the numbers received directly from the organizations, when the latter information was available.