These Salad Greens Keep Growing on Your Kitchen Counter

Although they're harder to pack and transport, living salad greens could stay safer and taste fresh longer. 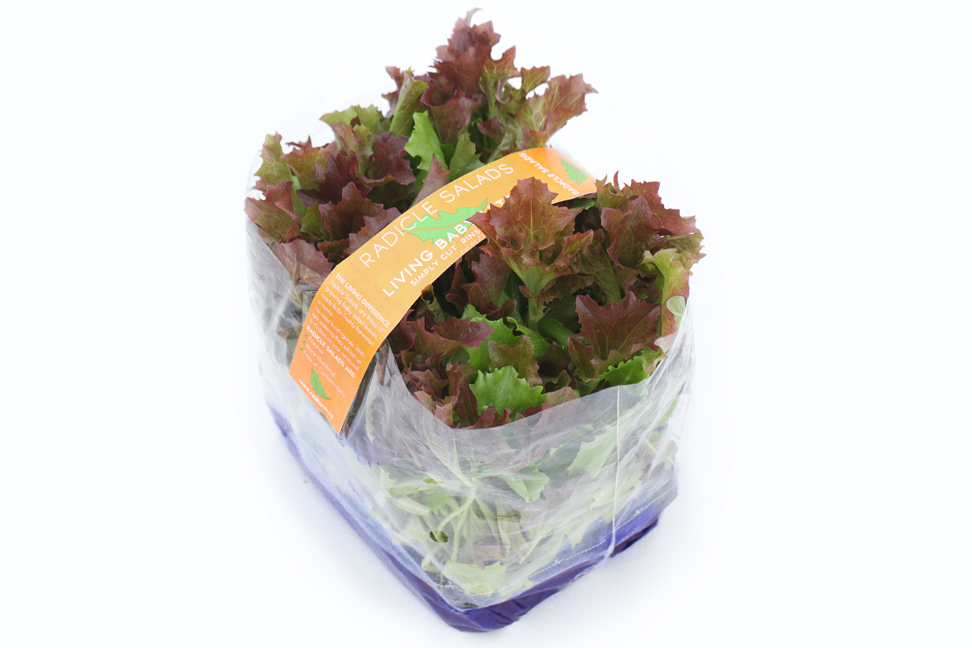 Salad greens have been getting a bad wrap in the news lately. Not only are pre-cut greens notoriously risky from a food safety perspective (Since the 2006 E. coli outbreak, all bagged lettuce now gets triple washed, but a 2010 Consumer Reports study says that spinach and other greens still harbor dangerous bacteria), but they also require considerably more water and other resources than head lettuce. Worst of all: A great deal of it goes to waste. According to the Washington Post, as much as 1 billion pounds go to waste every year.

For all these reasons, Christopher Washington, James Livengood, and Tony Gibbons are re-thinking salad greens. Their New York-based startup Radicle Farm Company is changing the way this American staple is grown, harvested, and delivered, and challenging assumptions about the way the 5 billion dollar bagged salad industry works.

The company’s name is a play on words. Spelled a different way the word suggests change and upheaval. “Ultimately were are really interested in fundamentally changing the way people think of salad greens,” says Gibbons, who co-founded the company with Livengood and Washington in 2014. 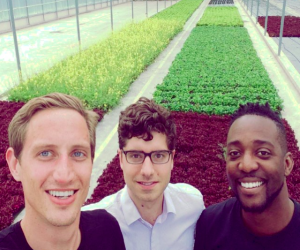 Their product is a living salad, sold with roots intact, designed for consumers to harvest themselves when they’re ready.

Unlike pre-cut greens, which can wilt and lose their flavor, Radicle’s greens continue to grow during transport, on the grocery shelf and in the consumer’s kitchen.

If watered and stored on the kitchen counter, they can last up to two weeks. “People are focused on delaying decay of the product. We’re focused on extending the life of plants,” says Washington.

Each package of greens is grown in a greenhouse in Utica, New York or Newark, New Jersey, in a compostable soil mix in a recyclable tray. Although the growing method and soil mixture are a trade secret, Washington describes their process as a mix between hydroponics and traditional agriculture. The plan is to become certified organic in the future. Growing indoors eliminates the need for any pesticides, and a targeted irrigation system relies on less water.

Radicle’s mixes include Baby Romaine with green and red leaves and Shanghai Spinach with tatsoi and komatsuna. The average retail pricefor a 4.5-ounce living Radicle salad is $3.99, compared to most bagged grocery store salad mix, which costs around $2.99. “We’re trying to level the playing field as far as democracy of food,” Washington says, “Everyone should be able to have this universal right of food.”

All three co-founders have experience with hydroponic farming. Gibbons co-founded Garden State Urban Farms, one of the first hydroponic farms in urban New Jersey. And Washington co-founded three farms using both traditional and hydroponic growing techniques in Africa and the U.S.

The three men met at a dinner party where they bonded over a shared concern for the growing quantity of food waste in the world. 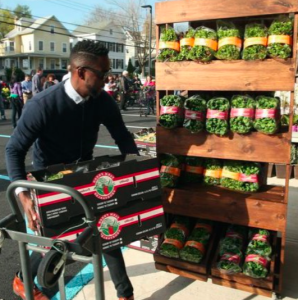 The statistics are overwhelming. In 2013 alone, Americans wasted more than 37 million tons of food, according to the Environmental Protection Agency. Sadly, only five percent of that waste was diverted from landfills and incinerators for composting. The Food and Agriculture Organization of the United Nations (FAO) estimates that one-third of all food produced for human consumption is lost or wasted.

Washington explains that bagged salad greens are harvested by large combines that gobble up everything in their path including frogs and other small wildlife. The animal detritus combined with high amounts of pesticide use created the need to “triple-wash” salad greens before they go to market.

Radicle Farm saves money by eliminating the complicated washing and bagging process. “We can grow a lot of food in a very small space, and we can lower the price of the food because we’re not going through that process,” says Washington.

“Our biggest challenge overall is really the fact that it is a new product and that there isn’t an infrastructure out there that knows how to handle boxes of [living] lettuce,” says Gibbons.

But for now, he feels that this experiment in “in-home agriculture” is worth the effort. “It’s always going to be hard to compete with massive fields in California,” Gibbons adds. “But we think our quality is on a different level.”