Amidst the explosive craft beer movement, a team of dedicated hops fans are seeding the return of this elemental ingredient to New York State. 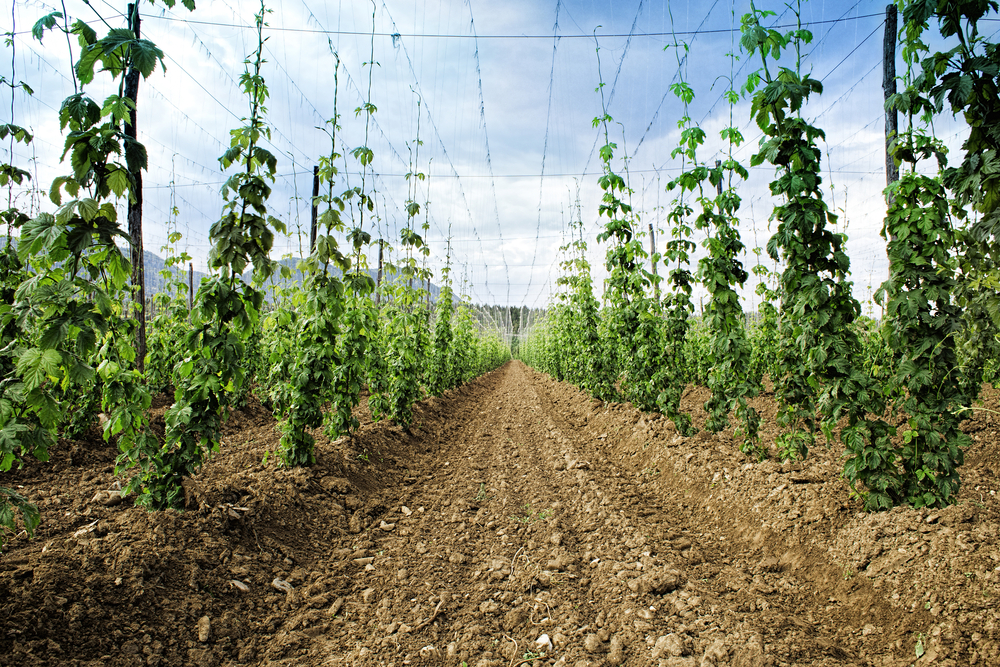 Last month, at the VIP dinner preceding Brewery Ommegang’s annual summer festival, employees, volunteers, and attendees toasted the launch of a brand new beer: Hopstate NY. The beer, which had been released in June, struck Ommegang fans as unusual, in part because the American Pale Ale was not made in the Belgian style—a first for the Cooperstown, New York-based brewery. But perhaps more striking: Hopstate NY had been made using 100 percent New York hops.

“We’ve been experimenting with more hop-forward beers, more American varieties,” said Ommegang brewmaster, Phil Leinhart. As hops farms have returned to the region, he says, “getting involved in the local hops industry just made sense.”

Not all beer contains hops, but the female flower of the hop plant, also called the “cone,” is seen as one of beer’s four essential ingredients, along with malted barley, water, and yeast. Hops add both bitterness and aroma.

Hops are no newcomer to New York. The now-trendy crop flourished in the state in the late 1800s, a time when Cooperstown itself served as an epicenter of U.S. hop production. At the turn of the century, however, mildew-related disease and the devastating effects of Prohibition all but destroyed the plants and the industry that surrounded them. Soon, hops production moved out West, where a better suited climate and several family businesses have kept it thriving without American competition for generations. Until now.

That New York hop industry is only beginning to reemerge, but thanks to a small but determined faction of researchers and businesses throughout the Capital Region, the Hudson Valley, and beyond, the historical plant is returning to its roots.

All this began in 2011 with the work of Steve Miller, a hops specialist at the Cornell Cooperative Extension, a non-profit organization and research foundation that connects upstate communities through agriculture and food systems. By 2012, Brewery Ommegang had caught wind of Miller’s hop growing program and the work he had been doing with local farmers. According to Ommegang’s “innovation manager,” Mike McManus (who is primarily responsible for planning and developing specialty and limited-release beers), the brewery approached Miller about how they could get involved.

Eventually, Ommegang and Miller decided on a multi-tiered approach: First, the brewery would establish a hop variety test yard to gather data and build insight into what varieties can be realistically grown, and have brewing value, in New York State. Second, they would support Miller’s Cornell co-op office financially to help him and his staff continue their research and success with local farmers. Finally, they would buy some of the hops to use in their beer.

“We bought hops from eight New York State farmers in 2014—about 1.5 tons,” says McManus. It was a drop in the bucket in terms of Ommegang’s total hop usage, but the brewery saw it as “a good start.”

According to Miller, an average hop farm in the Pacific Northwest is 500-1,000 acres. In Washington and Oregon alone, there are nearly 40,000 acres covered in commercial hops. In New York, hop farms average about five acres, with 300 total acres in the state.

“The biggest thing I have to get through to people is that selecting the site is going to make a huge difference in whether or not [the hop yard] will be successful,” he says. Two major requirements are soil quality and access to water, as hops require a significant amount of irrigation compared to other popular New York crops like apples. Along with securing a desirable location, hops farmers must invest in or rent specialized equipment, and they must also learn or dry, pelletize, and package the hops for brewers or hire another company to help.

“Hops are a unique crop in that you’re drying a flower and using it as an herb,” says Miller. “How they are treated and processed makes a big difference to the brewer.” They’re also temperamental; every harvest and every farm will yield something different, creating greater diversity in a wider range of beers. That quality is a challenge for farmers who are putting in a lot of work for little quantity, but they allow farmers to differentiate. New York hops farmers can also offer a fresher product to local and other regional northeast brewers.

Miller points out that it’s important to look at the hop industry in relation to the craft brewery industry, which has seen the number of small companies grown by leaps and bounds in recent years.

“Now that we have all these smaller breweries able to buy hops in smaller quantities, there is a potential market for smaller [hop] growers,” says Miller. “The different ingredients, different soils, and different climates create a uniqueness.”

Ommegang and Miller are certainly not the only ones attempting to bring hops back to New York. A series of state initiatives have been leading the way, like the Farm Brewing Law passed by Governor Andrew Cuomo in 2012, the related “Think New York, Drink New York” campaign coined by the New York State Brewers Association (NYSBA), and the Craft New York Act, which eased restrictions on marketing craft beverages.

All of these legislative efforts have encouraged the state’s breweries to work with local farmers, and some have required it. Those operating as licensed “farm breweries,” for example, are currently legally bound to use 20 percent New York State ingredients, and that percentage is set to increase to 60 percent by 2019 and 90 percent by 2024.

McManus sees the Farm Brewery license as a powerful tool for small brewers, in part because it allows them to establish up to five satellite locations, where they can sell their product as well as sample other local ciders, wines, and spirits. “It also supports farmers and furthers the often overlooked reality of beer as an agricultural product,” he says.

Currently, Miller estimates there are 90 breweries operating with a farm brewery license, “but that number seems to change every week,” and the demand for local hops isn’t limited to those who are required to use them. Ommegang, for instance, which refers to itself as a “farmstead brewery,” and maintains its own a hop yard, doesn’t carry the farm brewery license.

New York hops may never be able to compete with the other hop growing centers of the world, such as Oregon and Colorado. Not only is the scale much smaller, but the prices can range from a few dollars more a pound to triple the price. But McManus says he is excited to see what is developing. “It has certainly given me a whole new appreciation when I hoist a pint,” he adds.