Big fast food chains could be leading the way on antibiotics reform in the food system. But aside from Chipotle, Panera, and Chick-fil-A, a new report says most have fallen short. 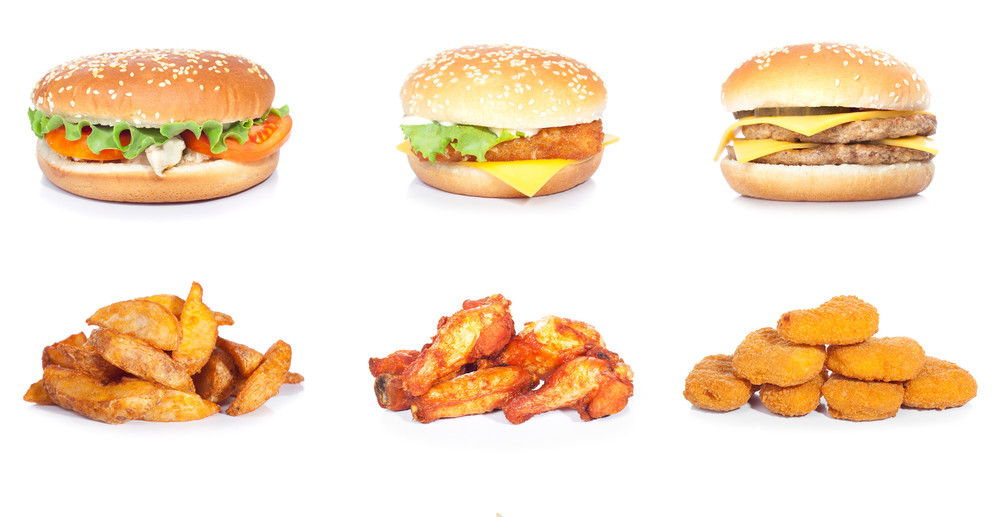 This spring, when McDonald’s announced its plans to start buying chicken raised without antibiotics important to human medicine, the move had a ripple effect throughout the food supply. McDonalds is the nation’s second largest chicken buyer and Tyson Foods, the largest U.S. poultry producer, and one of McDonalds’ major suppliers, followed shortly thereafter with a similar announcement. A few weeks later, the nation’s number-two poultry producer, Pilgrim’s Pride, announced its own antibiotic reduction policy.

At a time when Americans eat more than 200 pounds of meat per person every year and spend nearly half of their food dollars on meals eaten outside the home, big restaurant chains like McDonald’s have an outsized influence on how our food is grown and raised.

But when it comes to reducing the use of antibiotics in meat production, that influence isn’t making much of a dent. According to a report released today by a half-dozen environmental and consumer advocacy groups, including Friends of the Earth (FOE), Consumers Union, and Natural Resources Defense Council (NRDC), only six of the United States’ 25 biggest restaurant chains have earned a passing grade on efforts to cut down on antibiotics in their meat supply.

The only “A” grades went to Chipotle and Panera and the sole B to Chick-fil-A, while Dunkin’ Donuts and McDonald’s received Cs and Subway earned a D. Everyone else—from Applebee’s, Burger King, and Olive Garden, to Starbucks, Taco Bell, and Wendy’s—received “Fs.”

A Lack of Oversight

Antibiotic use on farms contributes to the spread of antibiotic-resistant bacteria, which the World Health Organization considers “an increasingly serious threat to global public health.” The U.S. Centers for Disease Control and Prevention (CDC) estimates that at least 2 million people in the U.S become infected with antibiotic-resistant bacteria every year and at least 23,000 die as a result of such infections.

Meanwhile, the U.S. Food and Drug Administration (FDA), which regulates antibiotics use in the U.S., says that about 70 percent [PDF] of medically important antibiotics sold in the U.S. are purchased for livestock use. NRDC says that, including all antibiotics, number is closer to 80 percent. Much of this use, says the CDC “is unnecessary and inappropriate and makes everyone less safe.”

In June, the FDA announced a new rule that—beginning in December 2016—is aimed at restricting the use of medically important antibiotics to treatments approved by veterinarians, in an effort to cut down on their use as growth promotion. However, the same drugs are used for “disease prevention” and growth promotion, and the FDA will continue to allow what it calls “long-term or open-ended prevention uses.”

In other words, this is just the latest in a series of rules that are likely to be more symbolic than effective in decreasing the actual quantity of antibiotics used on farms—a number that has actually increased in recent years.

In the absence of further regulation, cutting down actual antibiotic use in food animals will depend on voluntary efforts by meat producers and demand from companies they supply. Or as the NGOs’ new report says, “the growing problem cannot be solved unless meat producers and large meat buyers—including in the restaurant industry—are part of the solution.”

It’s also worth noting that while truly antibiotic-free meat may be rare in fast food restaurants, the label is not a panacea. While most farms must maintain cleaner, less-crowded conditions to reduce antibiotic use successfully, the label does not necessarily take into account other aspects of a farm’s practices when it comes to animal welfare or the environment.

In fact, even A-lister Chipotle refused to disclose to Buzzfeed their standards for humane treatment of animals. And while all USDA organic meat is required to be free of antibiotics, all antibiotic-free meat does not come with the same guarantee of environmentally sustainable practices that organic does. Here’s a useful chart that compares labels.

When reductions have been made by restaurants, they have largely happened to poultry. As Hamerschlag notes, “I think we’ve made a lot of progress on chicken, but I am surprised by the fact that, other than Panera and Chipotle, we haven’t really seen better policies in pork and beef.”

That gap explains the “C” grade given to McDonalds, despite its recent pledge. As one of, if not the, nation’s largest buyers of beef, Beef Magazine has reported that McDonald’s sells about 15 million hamburgers daily and has been known to buy nearly 1 billion pounds of beef in a single year. And yet, unlike with chicken, McDonald’s does not yet have a plan for cutting down antibiotics in the beef it serves.

And this is where a lot of the nation’s most popular restaurants appear to be falling down on the job, according to the report. Only Chipotle, Panera, Chick-fil-A, and Dunkin’ Donuts have antibiotics use policies that apply to all the meat they serve.

Further more, the same four—and McDonald’s—are the only ones with policies that actually limit routine antibiotics use. The rest of the companies rated—Burger King, Wendy’s, Subway, Olive Garden, KFC, Chili’s, Sonic, Denny’s, Domino’s, Starbucks, Papa John’s Pizza, Taco Bell, Pizza Hut, Applebee’s, Jack in the Box, Arby’s, Dairy Queen, IHOP, Outback Steakhouse, and Little Caesars—either have no publicly disclosed policy on antibiotics use in their meat and poultry or have policies that, according to the report, allow for ongoing, routine use of medically-important antibiotics in all the meat they serve.

The top three companies received high marks for transparency, while the top four also received points for their commitment to using independent third-party monitors and auditing programs to ensure compliance with the companies’ antibiotics use policies.

“We’re hoping the scorecard will convince companies of value of this transparency,” said Hamerschlag.

We reached out to a handful of restaurants mentioned in the report, but only Burger King, Starbucks, and Wendy’s responded by press time. Burger King said via email it had “nothing to add at this time” and Starbucks referred to its animal welfare policy that only specifies support for “responsible use of antibiotics to support animal health.” Wendy’s spokesperson Frank Vamos explained that the company is currently serving chicken raised without antibiotics in four test markets—Orlando, Gainesville, Kansas City, and Austin—and plans to add three more in the near term. The restaurant’s policy, “strictly prohibits the use of antibiotics that are medically important to humans for the sole purpose of growth promotion,” but allows antibiotics for “prevention” as well as “control and treatment of disease.” And it’s this latter use that keeps the company policy from getting higher marks on the NGO report card.

While the report focuses on the country’s biggest restaurant chains, it also gives a shout-out to some smaller and regional chains. Among these are Shake Shack, Elevation Burger, Burgerville, BurgerFi, and Farmer Boys, which are responding to consumer preferences by offering antibiotic-free meat as well as organic and grass-fed alternatives. This, said Hamerschlag, “is a sign of where the market is going.” These chains, she said, are “growing by leaps and bounds in part because they’re offering higher quality meats.”

What’s the bottom line? If you want to avoid meat raised with antibiotics, either opt for chicken from one of the restaurants now sourcing antibiotic-free birds—or choose your chain restaurants with care, knowing that these policies are evolving.

And interestingly, concern about antibiotics in meat is not just important to stereotypical Whole Foods shoppers. Results of a national survey released in August showed that 34 percent of fast-food restaurant customers said they would visit McDonald’s more often if it served meat raised without hormones or antibiotics.

“This is the future,” said Hamerschlag. “Restaurants that want to stay competitive will need to change their policies and practices.”

Update: A group of 109 organizations sent a letter asking the 25 fast food chains mentioned in the report to direct their suppliers to reduce the overuse of antibiotics in their meat supplies. 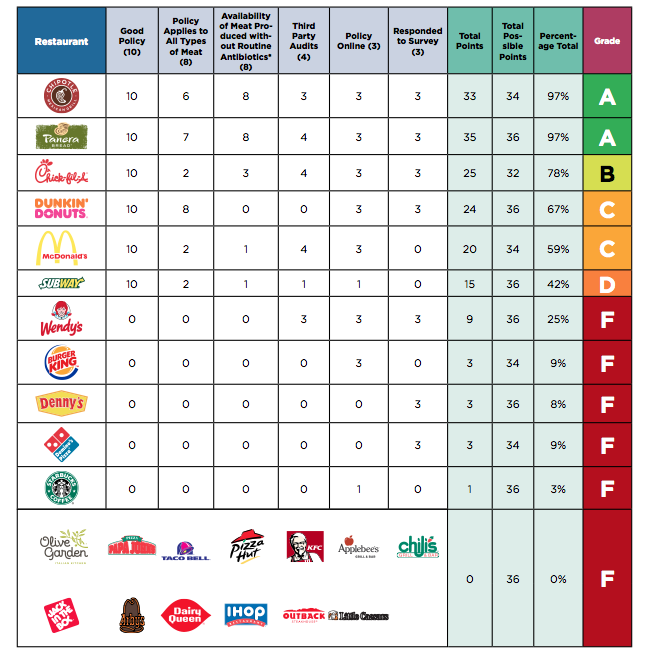