5 Things to Know About the Congressional Battle over School Lunch

Kids are finally getting more whole grains and vegetables at school. But the healthier rules are at risk as Congress debates Child Nutrition Reauthorization. 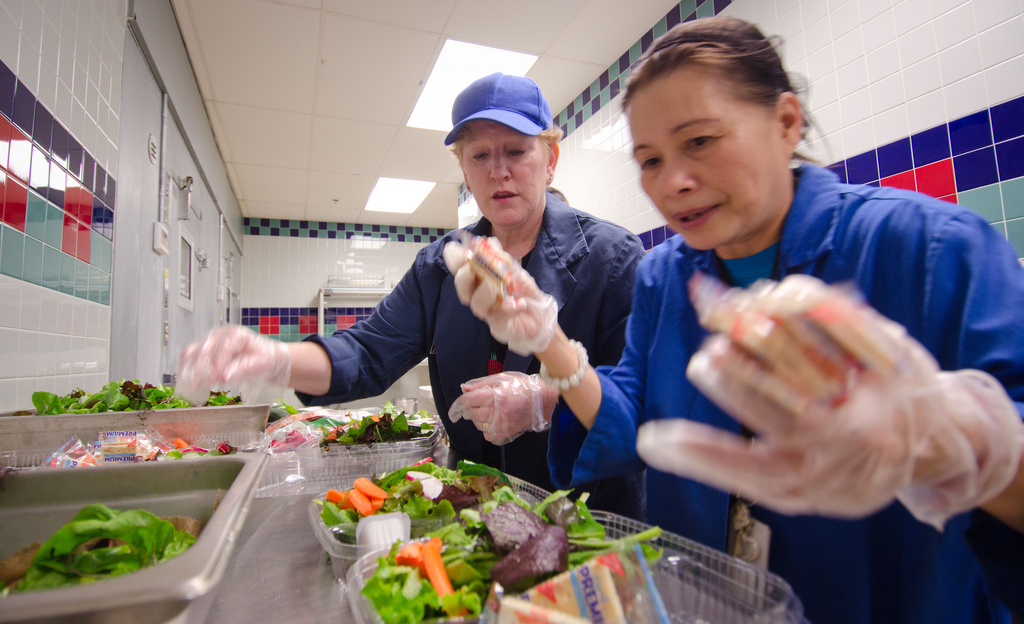 As millions of students around the nation return to school cafeterias this month, Congress will begin to make some important decisions about what exactly those students will be eating in the years to come.

In the months leading up to the last CNR, in 2010, school food reform advocates seized that opportunity to make important changes. Led by an outspoken First Lady, dozens of leading health organizations and anti-hunger groups lobbied hard for the passage of the Healthy, Hunger-Free Kids Act, (HHFKA) which contained numerous child nutrition improvements, including an overhaul of outdated school breakfast and lunch nutritional standards. The new law was widely regarded both as a victory for children’s health and as one of the Obama administration’s signature achievements.

Five years later, and just three years after the new rules became effective in schools, the American public appears to be applauding the healthier standards. According to a recent W.K. Kellogg Foundation poll: 67 percent say the nutritional quality of food served in public school cafeterias is excellent or good (up 41 percent from before the HHFKA); and 86 percent say school food nutrition requirements should stay the same or be strengthened.

But inside the halls of Congress, the standards are at risk. Here are the five things you need to know about the 2015 CNR and the battle brewing over school food:

At the Core of the Debate: Fresh Produce and Whole Grains

Among other improvements, the HHFKA requires schools to serve only “whole grain-rich” foods, meaning at least 50 percent of the flour used in foods like breads and tortillas must come from whole grains. The law also seeks to gradually reduce sodium in school meals over a 10-year period, and it requires that children actually be served fruits or vegetables at lunch, rather than being given the option to pass up those foods.

Although it originally supported all of these changes, the School Nutrition Association (SNA), an organization of 55,000 school food professionals, has for the last two years been leading the charge to roll them back. In doing so, the SNA cites widespread student rejection of the healthier meals as well as increased waste and expense for school districts.

Specifically, the SNA wants to lower the whole-grain standard so that only half of the grain foods served must be “whole grain-rich” (as a result, only one-quarter of the grains served in schools would have to be whole). It also wants to keep school food sodium levels where they are, halting the HHFKA’s further planned reductions. Finally, and perhaps most controversially, it wants to revert to the old system under which children were offered—but did not have to take—fruits and vegetables at lunch.

All of these proposals run counter to the evidence-based recommendations of the Institute of Medicine (IOM) upon which the HHFKA’s school meal standards were established.

Another proposed change to nutritional standards comes not from the SNA, but from the dairy industry, which is trying to shore up a dramatic decline in school milk consumption via the School Milk Nutrition Act. Among other provisions, the law would allow the industry to offer not only fat-free flavored milk in schools, but also a 1 percent milk fat version (capped at 150 calories per 8 ounces). The bipartisan bill has its detractors and its inclusion in the CNR isn’t guaranteed, but at a June 16 CNR hearing, Agriculture Secretary Tom Vilsack voiced his approval of the idea and seemed to indicate it might also be accomplished through executive action.

Do the New Rules Really Cause More Waste and Expense?

According to the U.S. Department of Agriculture, 95 percent of school districts are already successfully meeting the HHFKA standards. But in its just-released 2015 annual member survey, the SNA found that close to 70 percent of the surveyed districts felt they had suffered financial harm as a result of the standards.

That’s a compelling finding, but managing a school food program has always been financially challenging under prevailing federal reimbursement rates. For example, the SNA’s 2010 annual member survey (taken two years before the HHFKA went into effect) found that almost the same percentage of respondents (65 percent) were worried about failing to cover their costs. And two years before that, another SNA report noted, “Many [districts] still struggle to operate in the black. The current federal reimbursement rate is not enough to keep up with the cost of food, energy, and labor.”

What about reports of students rejecting healthier school food? The evidence is decidedly mixed. A new study released last week appeared in news stories claiming “the Healthy School Lunch Program Is in Trouble” because it found that students’ fruit and vegetable consumption is down and waste is up since the HHFKA’s implementation. But an earlier Harvard School of Public Health study found the just opposite; while fruit consumption remained the same, the researchers said, vegetable consumption had gone up.

It’s also worth noting that both studies used data gathered in the first year of the HHFKA’s implementation, before students had a chance to get used to seeing fruits and vegetables on their trays every day. And even the researchers who found lower fruit and vegetable consumption didn’t advocate changing school meal standards. Rather, they urged schools to do more to boost consumption, such as slicing fruit and serving vegetables with dips.

Who Are the Players Behind the Scenes?

Because the SNA takes half its funding from processed food “patrons” such as PepsiCo, ConAgra, and Tyson, health advocates often see the hand of Big Food behind the organization’s current legislative agenda. After all, if school nutrition standards are weakened, more processed junk food can be sold to school districts, resulting in more profits to Big Food.

That argument certainly makes sense and some food companies likely would stand to benefit if SNA’s lobbying efforts succeed. But according to a recent piece in Politico (paywall protected), many other companies have already adapted to the new rules and see no need to change them. Indeed, Politico reporter Helena Bottemiller Evich actually found that processed food companies “have a more secure spot than ever in cafeterias across the country because manufacturers have been willing to evolve and schools continue to need their inexpensive, pre-made products to feed millions of kids.”

With new school products like whole-grain-rich Pillsbury breakfast cinnamon rolls and reduced-sodium, whole-grain Schwan’s “Big Daddy” pizza, these companies have invested time and money into meeting the HHFKA’s standards–and they’re now reaping the rewards. According to Bottemiller Evich, “leading companies, including General Mills, Schwan’s, and Domino’s, are increasing their sales … and the industry as a whole has dialed down lobbying against nutrition standards. In some cases, food companies would even prefer to keep the new rules … and a compromise on one sticking point, sodium, seems possible.”

So if Big Food isn’t the main force behind weakening school meal standards, who are the SNA’s allies in this fight? The National School Board Association has lent its support, in a stance that is consistent with that organization’s general opposition to federal regulation of local school districts. The SNA has also found a sympathetic ear among many House Republicans who see the regulations as examples of “federal overreach.” (The fact that the Obama administration is so closely associated with the HHFKA likely also plays a role in Republican opposition.)

Who’s in favor of keeping the new rules? At least 200 leading health and advocacy organizations, including the American Medical Association, the American Heart Association, and the American Academy of Pediatrics; Mission Readiness, a group of retired military generals concerned about childhood obesity; the United Fresh Produce Association, which is fighting to keep fruits and vegetables on kids’ trays; and, notably, 19 past presidents of the SNA who broke ranks with the organization last year to protest its proposed nutritional roll-backs. The bulk of the American public is also on this side of the debate. The Kellogg poll mentioned above found that 93 percent of the 1,200 adults surveyed said it’s very important or somewhat important to serve nutritious foods in school.

How Soon Will Congress Act?

The HHFKA is set to expire on September 30. If that deadline isn’t met (and it likely won’t be), the various child nutrition programs the HHFKA covers—including WIC and the Child and Adult Care Food Program—aren’t at risk. Most of these programs are permanently authorized and those that aren’t will likely be granted an extension until the changes in the next reauthorization become law.

In the meantime, two Congressional committees are tasked with coming up with bills for the CNR: the Senate Agriculture Committee and the House Education & the Workforce Committee. Both committees have been holding CNR hearings over the last year to gather testimony from various stakeholders. More recently, Senator Pat Roberts (R-Kansas), chairman of the agriculture committee, and Senator Debbie Stabenow (D-Michigan), ranking member of that committee, have announced a mark-up session on September 17 to hash out a Senate version of the bill.  There’s been no word yet on progress on the House side.

On a June broadcast of the Inside School Food podcast, Jacqlyn Schneider, policy director for the Senate Agriculture Committee under Senator Stabenow, noted that there will likely be a fair amount of bipartisan agreement on many aspects of the CNR as it relates to school food, such as a proposed expansion of the Farm to School program, improving access to summer meals, and providing more funding for equipment and training. But it’s the proposed weakening of school food standards that will most challenge legislators in finding common ground.

In lobbying Congress, the SNA has couched its goals as merely seeking “flexibility” for school districts, a term which sounds innocuous. But if the organization succeeds in pushing through its agenda, it likely will be quite difficult to re-institute the higher nutritional standards set by the HHFKA, at least in the near term.

Meanwhile, almost 31 million children participate in the National School Lunch Program and, of those, almost 21 million live close enough to the poverty line to qualify for free or reduced-price meals. Similarly, 11 million children receive free or reduced-price breakfast each day. For many of these children, school meals are a sorely needed source of nutrition and may be the only balanced meals they eat during the week.

So while the 2015 CNR is guaranteed to be a complex mix of partisan politics, conflicting economic considerations, and some degree of compromise, from a purely science-based perspective, one thing is clear: A win for the SNA would be a loss for our nation’s most vulnerable kids.