The Snowday truck, and its parent group, Drive Change, are providing work training for a population with few opportunities. 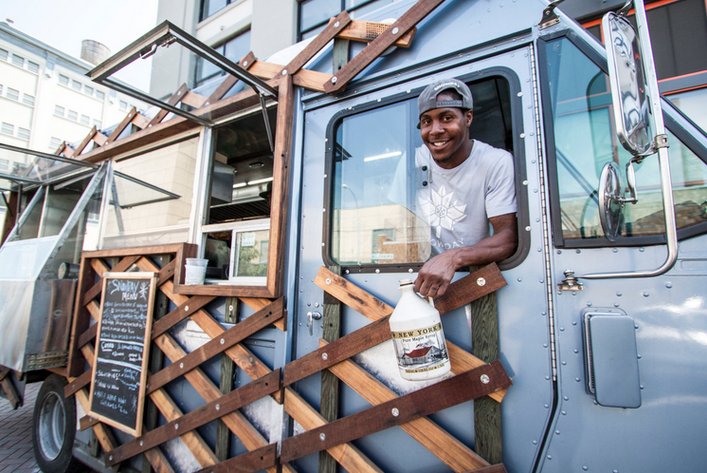 It’s high noon in the middle of a July heat wave in New York, and the Snowday food truck is baking in the middle of a parking lot. Its offerings include grilled cheese sandwiches steeped in maple syrup and kale salads that somehow still seem fresh, although the truck’s employees and customers look like they’re wilting.

Snowday is the first of its kind: a food truck that sources its food locally and employs formerly incarcerated people trying to get back on their feet. The idea is to train employees in every possible job, from cooking to dish-washing to working the cash register; to give them courses in social media, marketing, money management, culinary arts, and hospitality; to get them licensed through the Health Department and the Fire Department; and then to help place them in full-time jobs or school.

Jordyn Lexton, the founder of Drive Change, the non-profit behind the Snowday truck, says she has three goals. First, she wants to help people between the ages of 18 and 24 who have seen the inside of a jail or prison go on to live happy, productive lives. Second, she wants to build community around good food. And, third, she wants to use that community to educate customers about the criminal justice system.

At Rikers, most of Lexton’s students were adolescent men awaiting trial. At the facility, she says, “there was a culinary arts class. And in that class was really one of the only places inside of this very terrible environment that young people were happy, interested, focused and disciplined. Students would cook for teachers and share [the food] with them—and how much pride would come from the power of a shared meal.”

Thus, the idea for Snowday was born. Lexton quit her job, spent a year working on food trucks and in re-entry programs for the formerly incarcerated and another year fundraising and getting Drive Change off the ground. She officially launched the truck in April 2014.

Snowday follows in the footsteps of other re-entry programs centered around subsidized employment and food, such as the Reconnect Café in New York and the Homeboy Bakery in Los Angeles. The programs all have the same goal: to keep participants out of jail. In New York State, about 70 percent of former convicts get arrested, incarcerated, or convicted of a new crime. Lexton hopes to bring that number down to 20 percent for the graduates of the Snowday food truck.

“That’s extremely ambitious,” says Phoebe Potter, program director at the Council of State Governments Justice Center. The best programs manage to reduce recidivism (which, depending on the state, can include arrests, incarcerations, or only new convictions of former convicts) 20 or 30 percent.

“Think about just how many barriers people face and really the ability of a singular program to possibly deal with all those issues,” Potter explains, ticking off a list: housing, employment, rebuilding family ties, finding a mentor, dealing with substance use, getting cognitive behavioral interventions for issues like anger management, and taking care of physical and mental health. Drive Change has informal partnerships with other reentry programs to try to provide access to some of those services.

On the other hand, Potter says, employment-centered reentry programs “take into account what the people coming home say they need.”

“One of the things that people consistently say is … ‘I need a job. That’s important for my feelings of self-worth, supporting my family, getting back on feet.’ And so if we can find a way to leverage employment-focused programs to get those other needs met, particularly that criminal thinking and those cognitive behavior interventions and integrate that, that can have huge impact.”

That’s what Lexton is aiming for: Beyond just metrics about recidivism and employment, she says, “we also try to ask questions like, ‘How many days did you wake up excited to go to work this week? How many days were you excited to tuck your daughter into bed? Or proud?’”

Of Snowday’s first 10 employees, three now work in food service and one works for the Metropolitan Transit Authority (MTA). One has gone back to college. Drive Change has hired four of them to stay on as mentors for future program participants. And the last one never really completed the program, because he didn’t have stable housing at the time. He’s still looking for a place to live and the situation prompted Snowday to add a new requirement: Applicants must have their housing figured out in order to participate.

One of those who will stay on as a mentor is 24-year-old Darius J., who did not want to use his last name. Over the past year, says Jared Spafford, Snowday’s culinary arts director, Darius has begun to rent his own room for the first time and to pay for his first cell phone.

“He just got a queen size bed that fills his entire room,” Spafford adds. “It’s just amazing watching him grow up and blossom and take on more and more—and at the same time see him value himself in a way that he didn’t in the past.”

Before joining Drive Change, Spafford was the chef at Marlow and Sons, a Brooklyn farm-to-table restaurant. “I was very dismayed by the exclusivity,” he recalls. High-end food “is a luxury item, incredibly expensive for most people. I wanted to do something a little more altruistic.”

At Snowday, Spafford sources 90 percent of the truck’s food from local farms. He has partnerships with two educational farms, which donate large portions of their crops to the truck. So, every week, he drops by to pick up whatever they have to offer—and he tries to use it all. Last year, he says, he made a lot of beet green pesto.

One of the reasons Spafford likes getting ingredients from local farms, he says, is that “it provides exposure to ingredients and a quality of produce that a lot of the guys and gals who work with us were never privy to before.”

Running a food truck is way more difficult than running a restaurant, he adds. (“I have to double down on my meditating to make it through the day sometimes,” he admits.) But the truck’s mobility is key to the organization’s third goal: educating people about the criminal justice system. Bringing the truck to a variety of neighborhoods means its employees can interact with people all over the city.

During the five minutes between when people order their food and when it’s ready, the Snowday staff give out a criminal justice quiz for an opportunity to win a piece of Snowday apparel. The quiz includes questions like “What is the age of adult criminal responsibility in New York State?” (16) and “How much does it cost to incarcerate someone for a year?” ($160,000 is the answer they give, though studies have turned up a range of results, from $30,000 to $168,000). Those questions can be a starting point for a longer conversation.

Now that the Snowday food truck has made it through its pilot year, Lexton will start hiring 20 to 24 young people every year, in two groups of 10 to 12. Her goal is to grow Drive Change to include not only the truck but also a garage and commissary—a commercial kitchen where other food trucks from around New York City could store and prepare food. That would have the potential to net between two and four million dollars a year, which would provide financial independence. (Snowday currently nets around $200,000 a year, which is a little less than a third of Drive Change’s total operating budget; the rest comes from donations and grants.) Furthermore, the trucks using the commissary to park, cook, and re-supply could hire Drive Change’s graduates, thereby multiplying the organization’s impact.

One person who’s on board with helping the organization grow is Fredrick Coleman, one of Snowday’s first employees and now a mentor for incoming participants. “Besides my kids, Drive Change is my first priority. I want to make sure this thing flourishes,” he says. “Once that happens, I see myself in some high-end, upscale, five-star restaurant, cheffing up my own type of things.”