Can the Milan Expo Bring Food Systems Into the Global Spotlight? | Civil Eats

Can the Milan Expo Bring Food Systems Into the Global Spotlight?

The event has drawn millions of visitors to view art, science, and technology focused on feeding the planet. 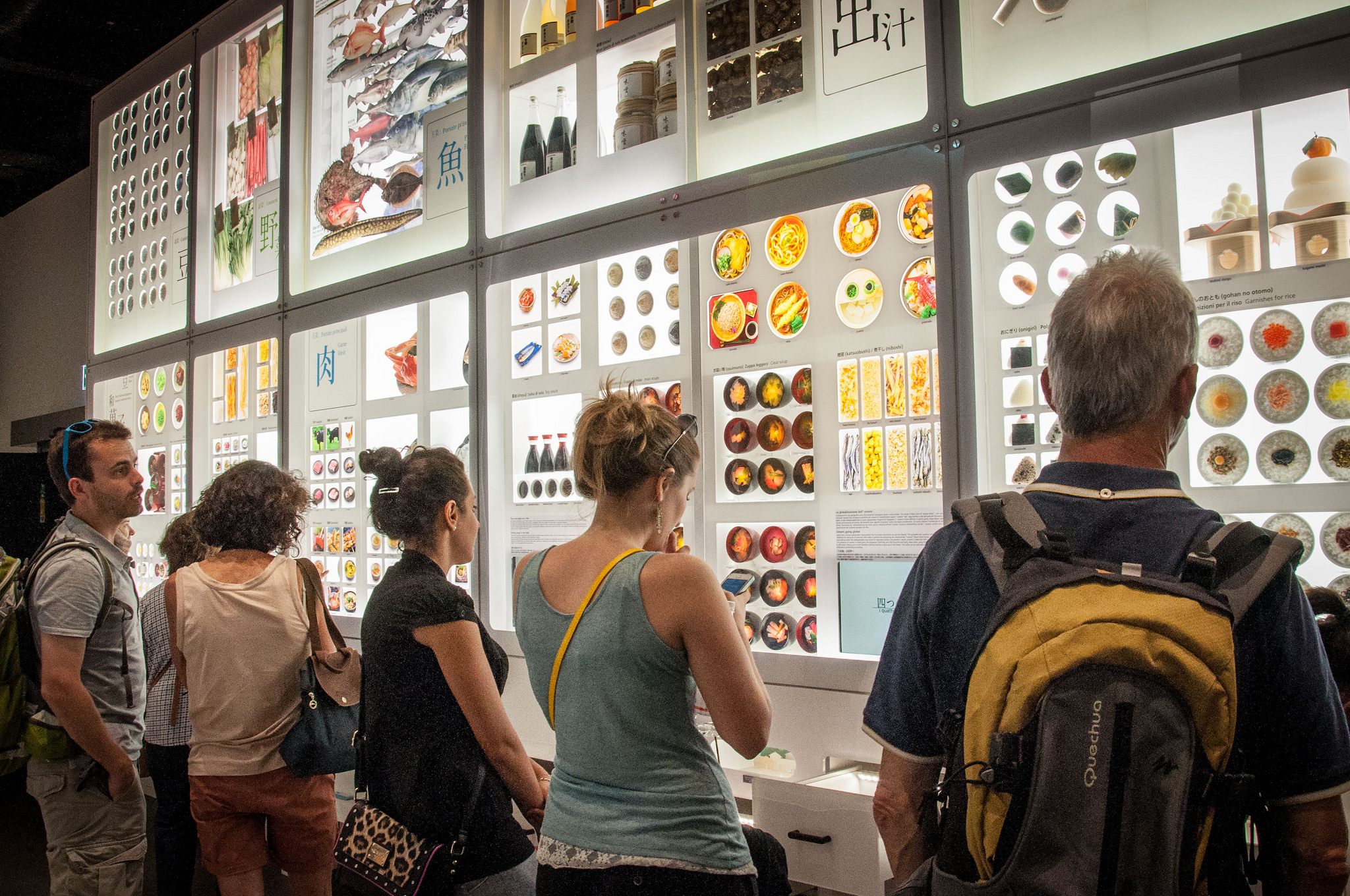 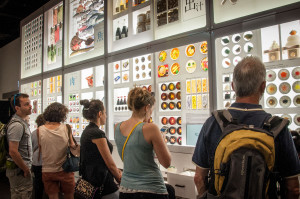 Attending Expo Milano 2015, the Universal Exposition currently taking place outside Milan, Italy, is not unlike going to an amusement park. “It feels a lot like Epcot [Center],” said Lizzie Hessek, a Philadelphia-based city planner who recently spent a day at the Expo.

There’s no cotton candy, there’s a complete lack of rides, and there are fewer chances to win prizes, but otherwise it’s a fair comparison. The event, which runs from May through October, fills up daily with big crowds, school groups in matching T-shirts, and lots of families. Smart visitors wear comfortable shoes to walk the long promenade, and performers dressed up as various foods—a fig, a leek, a pomegranate—roam the space.

But the mega-event also purports to have a higher purpose. The Expo is the 2015 Universal Exhibition, the modern equivalent of the World’s Fair. This year, the goal is to bring people together to explore a common theme: “feeding the planet, energy for life.”

With pavilions representing 140 different countries, many designed to create the sensation of having traveled around the world—Chile, Nepal, Belgium, and Hungary, all before noon!—and an impressive global snackbar, there’s no doubt that the Expo Milan is fun. But the question of whether or not it is moving the needle regarding food and sustainability is much harder to answer.

Expo Milano opened amidst controversy two months ago, with protestors, unified under NoExpo, voicing opposition to the extreme expense of hosting and building it, charges of corruption and nepotism, and the corporate involvement by multinational food companies like Nespresso (Nestlé) and Coca-Cola. Another lingering problem is the fact that the site, once agricultural land, has now been paved over with an enormous concrete slab.

Though most of the Expo structures will be entirely dismantled at the event’s conclusion, the site remains without a buyer or a clear plan for future use, a facet of large, temporary exhibitions that has plagued host countries for past Olympic Games and Expositions, alike.

Despite its fraught beginnings and uncertain future, the daily happenings at the Expo have settled into a frenetic, if more predictable, rhythm. The Italian Government and participating countries built it and people from around the world are coming, 8.5 million in the first two months alone.

Walking along the vast promenade of larger-than-life pavilions devoted to individual countries, “clusters” of cultural and informational displays organized various foods, spices, and coffee, and sponsor areas, the impression is not unlike that of the Las Vegas strip: one marvel of architecture and design after another. This focus harkens back to early World Fairs and their goal of inspiring awe with technology and architecture (the Eiffel Tower, the elevator safety brake, and ketchup all had their debuts at various World Fairs).

But today’s exhibitions take place in a world where one can broadcast globally from one’s bedroom, and where new technologies are more likely to be revealed in specialized industry events than anywhere else. In other words, Universal Expositions are now as much about communicating national identity as they are about their themes. So the Milano Expo is, therefore, something of a hybrid; ostensibly a clearinghouse where participating countries show the world how they are “able to guarantee healthy, safe, and sufficient food for everyone, while respecting the Planet and its equilibrium,” and simultaneously, a chance for countries to stake a general claim in a global conversation, regardless of the topic.

Though the theme promises exhibitions that tackle issues like hunger, increasing food production, and decreasing reliance on destructive agricultural practices, the response to the theme varied starkly from country to country. The resulting experience was some combination of elaborate design exhibition, trade show, and promotional tourism advertisement.

Ireland’s pavilion, for example, shows lush images of wooly cattle and touts the fact that 90 percent of their livestock is on a grass-based diet. The Netherlands’ food truck-based pavilion displayed information about growing algae as a potential source for food, feed, and energy. And Monaco’s displays include one that proclaims “All you need is yak,” about the efficiency of livestock farming in Mongolia. While some displays looked at ocean acidification, forest management, aquaculture, and eating insects, others seem to have missed the mark.

“Vietnam was really interesting,” says Mike Lee, founder of food design and innovation agency, Studio Industries, who went to present at the USA Pavilion. “But I don’t think they got the memo that the Expo was about food. [Although] there was a concession stand in the back, it was mostly a curio of indigenous art.” Similarly, Estonia’s pavilion features designer furniture and a gift stand, and Turkmenistan’s displays beautiful carpets and information on industrial exports.

Many pavilions that do use food as an aesthetic device, provided big multimedia programs frequently featuring kaleidoscopic film displays of produce (I’m looking at you, South Korea, Colombia, and Thailand), but without always connecting the imagery to specific data or ideas.

As a result, it’s entirely possible to leave a day at the Expo having experienced plenty and learned little. For Hessek, “it never felt like the point was food security as much as it was about architecture and design, which didn’t bother me, but I wouldn’t say that I left feeling more knowledgeable about food in the world.” 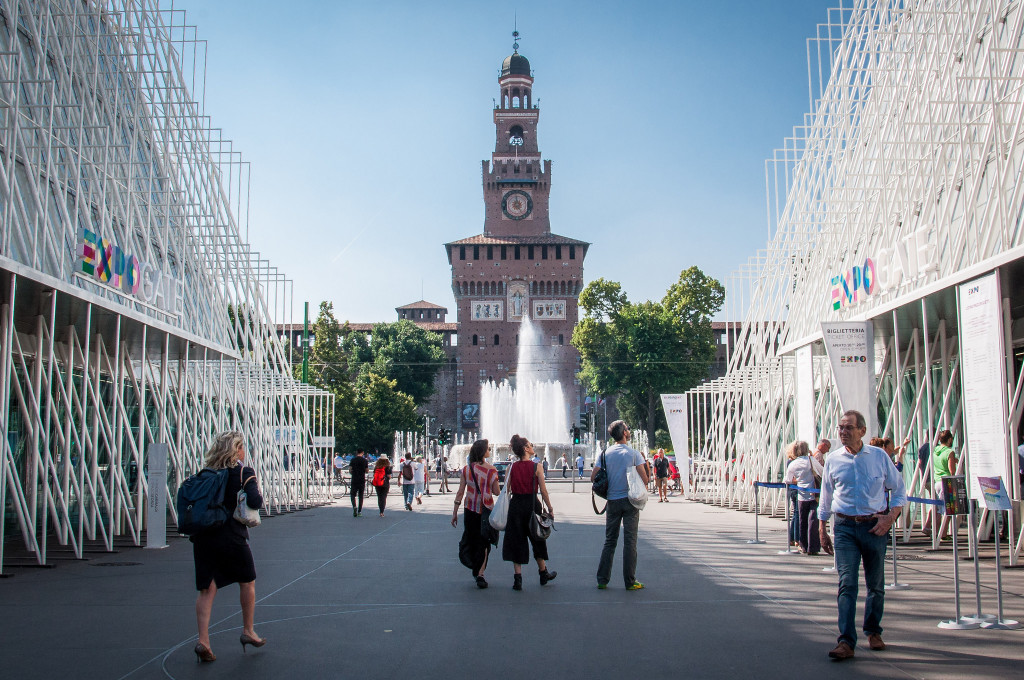 Though the Paris-based organizing body of the Expo controls the design and layout of the space, it is largely left to participating countries to present themselves. As a result, “you could walk through here and think that everything is wonderful and the future is golden,” says Mitchell Davis, Executive Vice President of the James Beard Foundation and Chief Creative Officer for the USA Pavilion. “Because of course what’s happening here is that countries are presenting both their own identities and they’re projecting also how they want to be seen.”

For those who are already working in or thinking critically about these issues, there is less that is truly thought-provoking. But for the uninitiated general public, the fact that these ideas are on display at all, even if inconsistently, is perhaps an opportunity.

“Part of the brilliance of food is that it is both attractive for aesthetic and gastronomic reasons, but it is also complicated enough to contain these other issues,” says Davis. He’s optimistic that the Expo’s vast attendance will expose an entirely new audience to these issues. “This could have been about anything and the fact that it’s about food is a tremendous opportunity for those of us who care—profoundly care—about the future of food,” he adds. 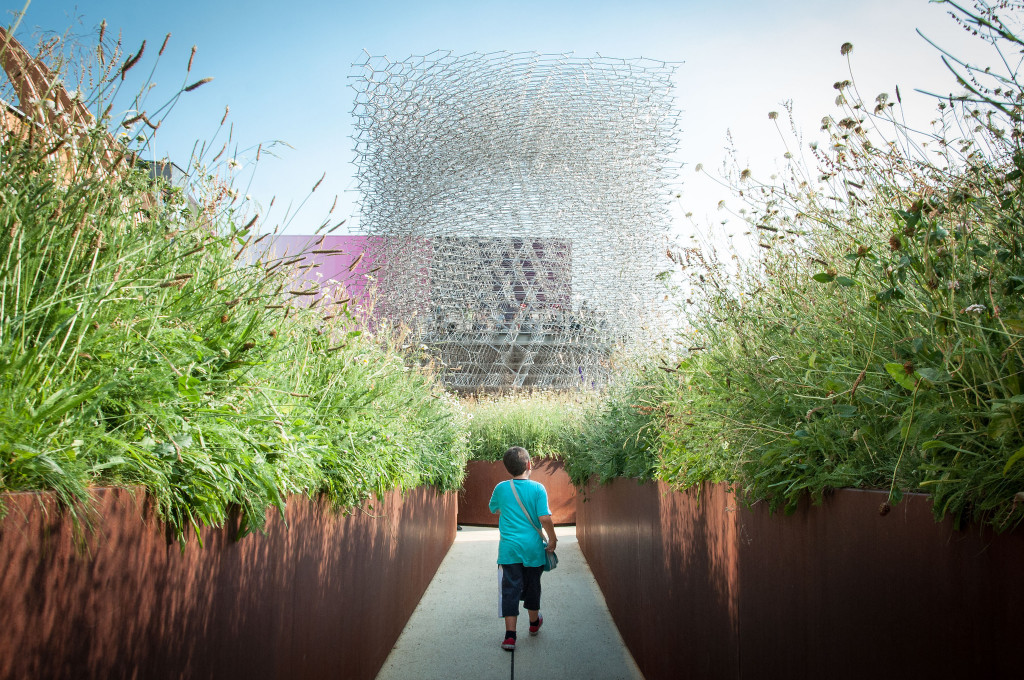 Participation in the Expo is voluntary and expensive. In fact the U.S. had initially not planned to attend, but, according to Davis, “we were contacted by the Italians …[who] felt as though that would be a huge omission.” So, although Expo presents itself as a collective, global exhibition, certain countries are notably missing. Canada, Australia, and India are not present, citing budgetary concerns.

The USA pavilion is a multifaceted enterprise that features a walk-through theatre of short films, a walkway made from Coney Island boardwalk planks, and interactive displays including a recorded message from President Obama, and a third floor terrace to host visiting speakers.  While economic powerhouses like the U.S., Austria, and the UK have these multi-story pavilions, smaller, less economically powerful countries are grouped into thematic “cluster” pavilions where they’ve each been given a single room.

For instance, the Coffee pavilion is comprised of Burundi, El Salvador, Ethiopia, Guatemala, Kenya, the Dominican Republic, Rwanda, East Timor, Uganda, and Yemen. The Cereals and Tubers pavilion houses Bolivia, Congo, Haiti, Mozambique, Togo, Venezuela, and Zimbabwe. Overwhelmed? That’s what the experience of trying to grasp each cluster is like. While South Korea and Morocco pulled guests in with flashy displays, the rooms of these smaller pavilions are largely empty of visitors, even on busy days.

Perhaps this wouldn’t be an issue if the Expo weren’t as massive, but it would take even the most dedicated and organized visitor three full days to see everything.

“You have to make your moves kind of strategically,” admits Lee. “So it’s a choice between standing in line for [a pavilion] that you’ve heard so much about or visiting a cluster, I’m probably not going to go to the cluster.”

One of the criticisms of the Expo is that it is so filled with contradictions. Visitors can learn about small, impoverished cacao growers in the Chocolate cluster, while Nutella hands out samples next door. The Slow Food pavilion, praising biodiversity and small producers, is so close to the McDonald’s pavilion that it almost seems intentional.

Some critics of the Expo have dismissed it because of these contradictions. But the fact that all of these different voices are speaking at once, in ways that can feel overwhelming, certainly, and even contradictory, might also be as honest a representation of our food system as possible.

For Davis, this is key. “We talk about all the different food systems, the local food system, the sustainable food system, but really there is one food system…[and] big companies have got to be included.” 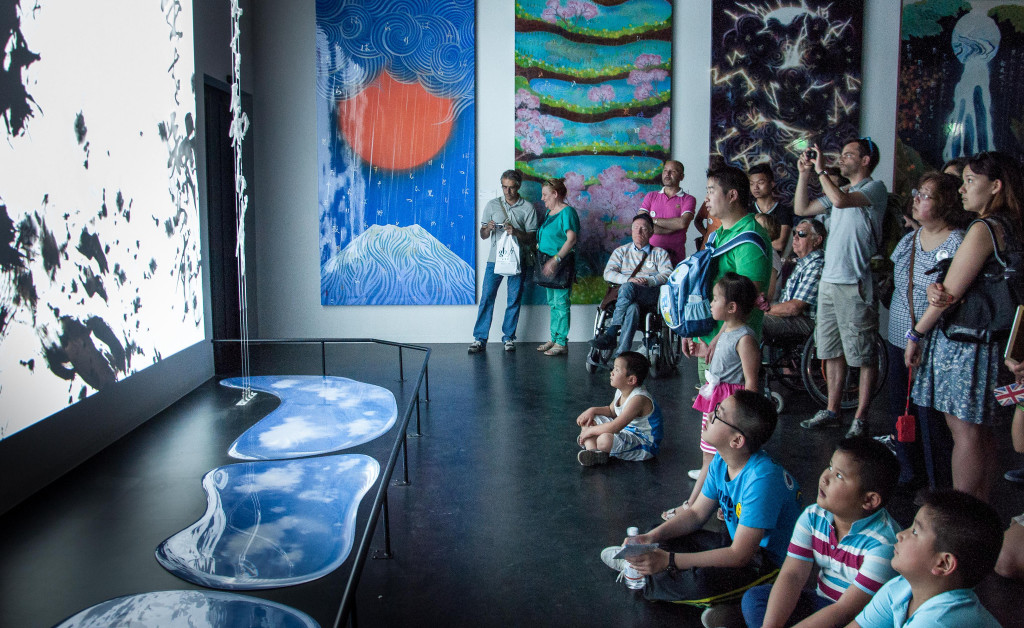 If nothing else, the Expo opens the opportunity to create a more expansive view. Michael Dimock, president of the California food and farm think tank Roots of Change, who attended in July, had this to add: “Expo Milano reflects the contradictions so apparent in the world today surrounding the food system. There is rampant commercialism, exaggeration, obfuscation of fact, obsession with technology and denial of the serious challenges. And there is a steady, dedicated voice of warning with clear statements of where we must go to reintegrate the food system with nature’s requirements.”

The Expo’s intended legacy is dialogue and shared commitment to moving forward together. Alongside the event, 98 thematic groups have called on individuals and institutions alike to assume responsibility in ensuring global food security in a six-page participatory document called the Charter of Milan, which is available in its entirety online to read and sign. (As of the end of July, it had received over 500,000 signatures.) Though it’s tempting to think of this exercise as a gesture, Dr. Silvia Gaiani, faculty in Food Science at the University of Bologna, is optimistic about the document. “My hope is that it will have a strong political impact and [that the international community] will make governments’ commitment to it mandatory,” she says.

The Expo isn’t Epcot and it’s not a scholarly conference. It’s something in between. While theme parks have the benefit of one vision, one voice, and one set of priorities, Davis points out, at the Expo, “different cultures are representing themselves through their own eyes.” Of course that representation will be incomplete and flawed, but it still might be enough to inspire a global audience to think differently about food–complete with contradictions and conflicts.

Hessek, for her part, isn’t conflicted. “It was worth it,” she says. “I’m still talking about it. I talked about it on the subway today; I told a guy from France that he had to go.”

All photos by the University of Southern California Center for Public Diplomacy/Flickr.