Josephine Wants to Bring the Sharing Economy to Your Kitchen

The site offers home cooked meals made in other people's homes. 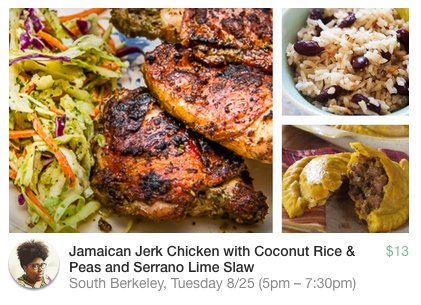 [Previous update: In February 2018, Assembly Bill 626 passed the California Assembly, one step further to passage. And at the same time, the homemade meal delivery company Josephine, which had advocated for the passage of the law, announced it is ending operations in the spring of 2018.]

On a Wednesday afternoon in late July, I sat in a stranger’s kitchen dipping a crispy papadum into a bowl of homemade lentil soup. No, I don’t burst into people’s houses, Goldilocks-style, demanding soup and crackers. I bought and paid for this particular meal ahead of time, through Josephine, a new website that aims to connect home cooks with hungry, local customers.

Truthfully, it felt awkward to approach an unfamiliar two-story house on a tree-lined street in Berkeley, California in search of my lunch. That is, until I spotted a sign advertising “Josephine.com–Home Cooked Meals.” A man standing at the top of the steps introduced himself as “Traci’s husband” and directed me back to the kitchen, where Traci Siegel constructed lamb shish-kebobs and dished out soup for people who had come to pick up their to-go “home cooked” meals.

Dressed casually in a grey T-shirt and jeans shorts, Siegel invited me to sit down to eat at a small table in her bright and airy kitchen. As we talked, her two teenage children rambled in and out, chatting as they ladled up lentils for themselves. Siegel works in marketing and doesn’t have a professional culinary background, but she’s been cooking for her family and friends for years. Now, thanks to Josephine, she’s also cooking for strangers—and getting paid for it.

The ‘Etsy of Food’

The premise behind Josephine is simple. Potential customers go online to peruse meals cooked by a stable of vetted home cooks on any given day of the week. Each cook posts a description of the meal, along with a photo, and the price per plate, ranging anywhere from $7 to $13. If you want a meal, just click to reserve a plate, and then use a credit card to pay ahead. Once the reservation is complete, Josephine sends you the cook’s home address.

When you’ve eaten, you can review the meal, much as you might review an apartment on Airbnb or a scarf on Etsy. The service is currently limited to residents of Oakland and Berkeley, but plans to expand to San Francisco later this year.

The company’s goal is two-fold, says Josephine’s 25-year-old CEO Charley Wang. In addition to providing nutritious home-cooked meals for people too busy or overwhelmed to cook, the company hopes to empower cooks who might find it difficult to find an entry point into the competitive food world.

In an industry where imitating a working model is encouraged, and nearly everyone describes their startup as “like Facebook/Google/Instagram, but for music/food/photos,” Wang is very cautious about the comparisons he uses. “Our goal is not to be the next Uber of food,” he said, in a conversation at the downtown Oakland co-working space where Josephine is headquartered. In fact, Josephine hopes to become the Etsy of food.

“We want to empower people, through support, marketing, technology, software and education, to build their cooking brand,” he says. Future plans include individual online storefronts for each home cook, similar to Etsy’s craftsperson pages.

Aspiring Josephine cooks apply online. If they look promising, they are invited to cook a meal for a Josephine team member, in their own home. If the cook’s food, personality, community reach, and kitchen cleanliness passes muster, the next step is to get a California food handler’s license (Josephine pays for this). If the first meal goes well, the cook receives full access to the Josephine platform. Cooks receive 90 percent of the revenue from each meal and Josephine takes 10 percent for software tools, community support, and the training component.

Each cook is considered an independent contractor, with creative license in pricing, meal planning, shopping, and marketing. On average, though the number can vary, the cooks shop and prep for 30 to 40 portions, and make about $200 profit, according to Wang. According to Siegel, she receives payment promptly the day after her Wednesday meals. There are currently 40 cooks on the platform.

“There are tons of people who have a passion for food, but who can’t make a living at it because they don’t have access to the business skills or the capital,” says Wang.

The biggest challenge for Siegel, who had never cooked commercially before, was figuring out just how much to prepare. In the beginning, she often found herself with leftovers. Recently, in attempt to streamline, she hired a local high school student, part-time, to help with prep.

The seed for Josephine appeared in early 2014. After uprooting from tech jobs in Los Angeles, Wang and co-founder Tal Safran moved to the Bay Area. Feeling nostalgia for home-cooked food, they set out to find an entry point into the food tech world. For eight months, they cooked and sold meals out of a rental home in Oakland, as they attempted to discover what people wanted out of an online “home-cooking” experience.

What they found, says Wang, is that their early customers, most of whom were parents of young children, turned to Josephine instead of other services because of the experience itself, not necessarily because the food was healthier or better than restaurant fare. They craved the experience of getting a “home-cooked meal,” even if it wasn’t one cooked in their own home.

Home-cooking by Americans, or the lack thereof, has garnered much attention of late. New York Times columnist Mark Bittman has spent the last decade trying to convince people that cooking at home is easier than we think. Journalist and author Michael Pollan has also spent several years arguing for the value of home cooking, beginning with his iconic 2009 New York Times Magazine essay and continuing with his 2013 nonfiction book, Cooked.

But it’s not just the food movement leaders who are talking about home cooking. A 2014 study published in the journal Public Health Nutrition found that people who cook tend to eat more fresh fruits and vegetables, and get significantly more fiber, fewer carbohydrates, and less sugar than those who rely heavily on restaurants and pre-prepared foods.

But does buying home-cooked meals from someone else count? Julia Wolfson, one of the study’s authors and a researcher in the Department of Health Policy and Management at the Johns Hopkins Bloomberg School of Public Health, told Civil Eats that the Josephine.com model seems like an innovative alternative that can help people have access to freshly prepared—and perhaps healthier—meal options.

“However, people tend to associate home cooking with an investment of one’s own time, effort, creativity, and love,” Wolfson added via email. In other words, she doesn’t necessarily think buying meals others are cooking on a large scale in their homes necessarily counts as “home cooking.”

Sara Bleich, another author of the John Hopkins University study, says that the service could provide the same benefits of cooking at home, but that it also raises food safety questions since the food and kitchens will not be regulated in the way that restaurants and other commercial food outlets generally are.

With their January launch, Josephine.com entered into an increasingly crowded food tech start-up landscape. Companies like Sprig, Munchery, and Spoon Rocket are working to replace pizza delivery with whole foods-based, chef-prepared meals, and meal kits. Feastly, which raised over $1 million in seed funding last year, uses a similar peer-to-peer model where people can reserve a spot at a high-end homemade dinner.

Wang says it would be easy to lump Josephine.com in with the slew of companies that want a cut of the $8 billion food industry, but he insists the company has a soul. “We’re working within a capitalist infrastructure, we’re taking money from our angel investors, and we have the same kind of aggressive growth model,” he acknowledged. At the same time, he said, the newbie food tech company lies at the convergence of three different movements based in the Bay Area: the “sharing economy,” a newly legitimate California cottage food industry, and the food justice movement.

The Princeton graduate sees Josephine.com as more “mission-driven” than companies like Uber, which started by staking a claim in the “sharing economy,” but have profited mightily from the exploitation of independent contractors. In a recent op-ed published on Medium, Wang argued that Josephine falls squarely on the “teach someone to fish” side of the scalable sharing economy business model.

The company has raised $600,000 in angel funding since it launched, though Wang says he has been very selective about applying for venture funding in an effort to pursue the company’s people-centric mission.

“Instead of having white people rolling a food truck into West Oakland saying, ‘hey, eat more salads,’ you can use Josephine, and find the entrepreneurs and the cooks—who are already [community] pillars and cooking culturally relevant food—and empower them to increase their reach and better their local community,” he said in a later conversation.

As I finished the last of my soup, Traci Siegel told me that, by offering an online marketplace for cooks who don’t necessarily have formal training, Josephine has “elevated” home-cooking. Another benefit? She’s made connections with people in the community—and other cooks—she wouldn’t have met otherwise.

“Maybe people don’t have time to make dinner themselves, but it gives them the chance to have that experience,” she says. “The [home-cooked meal] has been lost and this is a way to get it back.”