Generation Yum: Why Millennials Are the Most Food-Obsessed Generation in History | Civil Eats

Generation Yum: Why Millennials Are the Most Food-Obsessed Generation in History

Q&A with author Eve Turow on Millennials, Instagram, and how to engage the younger generation. 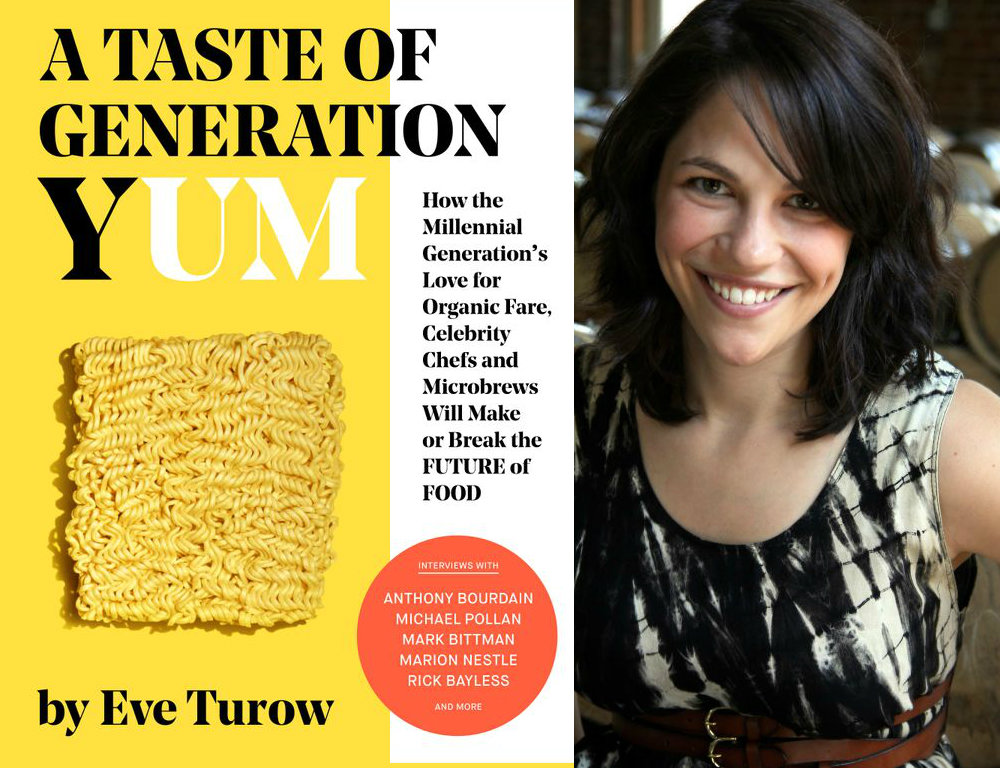 Millennials are thinking more about food than any generation in history. At least that’s the thesis behind Eve Turow’s new book, A Taste of Generation Yum: How the Millennial Generation’s Love for Organic Fare, Celebrity Chefs, and Microbrews Will Make or Break the Future of Food. The 28-year-old writer spent three-and-a-half years interviewing peers, sifting through academic studies, and talking to thinkers like Anthony Bourdain and Michael Pollan to find out what about eating has obsessed her generation.

Turow found a number of compelling reasons why those born between 1980 and 2000 are drawn to food and restaurants, in ways that are similar to how their parents responded to music and movies. As a generation who grew up in front of screens and came of age in a bad political climate and an ongoing recession, she posits, Millennials are reassured by food’s tangibility and the promised transparency of labels like organic and GMO-free. And because of the Internet, the Food Network, and larger forces like globalization, Millennials also have access to more information about ingredients and cuisines than ever before.

We chatted with Turow about what attracted her to the subject, what she found surprising in her research, and what it would take to turn Instagramming a burger into caring more about the food system.

In the book you mention that your research started with the restaurant and Instagram culture, and then expanded into the deeper food policy issues. Can you talk a little bit about your journey writing it?

I was at the New School getting my degree in creative nonfiction and looking for a topic for my thesis. I was sitting in class, surrounded mostly by Millennials, and one of the girls across from me was saying that there was a frozen yogurt place in Midtown that has flavors that changed every day. She had the number on her phone and would call them every day to see what the flavor was.

I thought, I’m surrounded by all these hyper-intelligent people, people who aren’t working in food, and yet this is what we’re talking about when we’re not analyzing sentences. We’re talking about the meals we just had and the restaurants we’re going to, or we’re bringing in baked goods, or we’re telling someone about this frozen yogurt place they have to go try.

I really started to analyze myself. I had gotten extremely into food, but three years before I couldn’t have told you anything about cooking or where my food was being sourced from. I had absolutely no interest. So I wanted to take a step back and use my bachelors in psychology to dig in a little more and find out what about food the Millennial generation finds so satisfying.

You obviously talked to a lot of people. What surprised you?

To be honest, I was really stumped [by this issue]. I wanted people to help me answer this and I didn’t have a theory of my own for a long time.

I did end up in a conversation with this woman who now works at Murray’s Cheese. I knew she’d gone from working at a magazine to working with cheese, but it ended up becoming this very personal conversation about eating disorders, and the fact that she finds the same kind of control and pleasure in eating a locavore, organic diet as she once did by abstaining from eating altogether.

It was the first time that anyone had connected those dots for me. As I continued to do research, the thread of control had been coming up over and over again. I hadn’t really thought about the rise of veganism and paleo and gluten free and raw food and those food trends. She was the first person who said, ‘The way I eat today offers me the same control I was craving when I was a teenager and anorexic.” It was not a thing I could have anticipated.

As you mention in the book, there are so many things in the world today that make us feel powerless.

I was just reading a Times piece talking about the rise in suicides on college campuses. There was this whole section on how Millennials feel out of control and have the highest rates of depression and anxiety ever recorded in a generation. Generation Yum is about food, but I think a lot of it is applicable to so many things outside the food realm.

I like that you’re not completely pro-Millennial, either. There’s a little bit of cynicism towards the end about the narcissism and self-serving nature of our generation. But what I always come back to is: If two Millennials are having a bigger conversation about where their food comes from, does it matter that they arrived at it through  obsession with, say, frozen yogurt?

I haven’t really found an answer to that. Both Michael Pollan and Anthony Bourdain very much leaning toward: “It’s a very good thing that people are talking about food and it doesn’t matter in what capacity they’re talking about it.” And even if eating local or eating organic is becoming part of the self brand or some kind of fetishized commodity, it doesn’t really matter in a certain sense because you still have more people who are educated about where their food comes from, and that’s the first stepping stone.

Anthony Bourdain kind of ended there. Young people are going to have weird obsessions, he said, and he was like, “I really don’t think there’s anything better that young people could be focusing on.”

Michael Pollan took it a step further and was asking: “How do you bring people into the fold?” And this is what I think about a lot. Say I want to activate Millennials to think more about food policy, think more about where their food comes from–how do you make the research into practice?

It’s a big question! What have you come up with so far?


I think we need to make food something that Millennials want to be part of their brand. We need to make it hip. I don’t believe that this is a generation of people who just want to do good things; I think we are self-serving and narcissistic. I think we’re really invested in branding ourselves.

And I don’t think that’s because Millennials suck. I think that’s been forced upon us and has become a survival skill in some ways, with the current economy and the way we were raised, it’s just been the byproduct of our situation. But somehow the conversation about the food system and food policy needs to play into that. Because otherwise I worry that the interest in food could fade.

Our food system is probably the number one issue our generation is going to face as a policy issue, as an environmental issue. And it really became a serious question for me, not just a sociological question. Are we actually going to take action on this? Is this focus on Instagramming pictures of ramen going to turn into someone considering how their [elected] official voted on farm subsidies or SNAP programs?

That’s something we talk a lot about at Civil Eats, too. How do you make people care about these bigger issues as much as sexier topics like restaurant gossip?


This is where I ended up: Recognizing the narcissism of our generation and accepting it. and then questioning how we play into it to get where we want.

And you know, a lot of that is making it fashionable. Near the end I’m talking about how food waste is becoming fashionable and I think we’re going to start relying on celebrity chefs in a lot of ways to bring things to light. I would love if Andy Ricker [chef/owner of Pok Pok] started a Thai insect food truck. I think that would be fabulous–something that everyone’s going to want to take Instagram photos of and talk about. But eventually that will get shared and other people will make their own insect recipes and everyone will figure out that they taste good and are really high in protein and fiber and are really cheap. At this point, I’m really looking into how you can distill [food politics] into something fashionable and sexy that can take off on its own.

Totally. And at the end of the book you have several action items. including the #WasteLessChallenge. Can you talk a little more about that?

The #WasteLessChallenge is something I kind of devised, which I personally try to hold myself to as well. My hope would be that as we continue to make something like food waste more visible and something people are talking about, that we also begin realize how much waste we produce every day, and how much of it is really unnecessary.

So just little things like recycling your Ziplock bags instead of throwing them out or finishing food or saving it for later. I save all of my food scraps now, I either compost them or throw them in the freezer and make vegetable stock. I really do believe that if you’re a single person you should only have to throw out one basic plastic bag per week of garbage and everything else should be compostable or recyclable. If everyone did that, it would just be astounding for our economy and our environment.

What does that look like practically? Do you want to see people using the hashtag and showing off their thriftiness on social media?

I want people to be vocal about it. I really want recipes for sustainable foods to be shared on Pinterest as much as everything else. I want recipes for sauteed carrot tops or broccoli stems or pickled mango peel. I definitely think that we’re a generation that needs an action item that’s not just tweeting or taking a picture. The things that are making an impact are those that we can touch, feel, and see. And then if you want to take a picture of it and tweet it afterwards, great, go for it.

This interview was edited and condensed for length and clarity.