Is There Herbicide in Breast Milk? | Civil Eats

Is There Herbicide in Breast Milk?

A new study highlights a huge data gap: The U.S. has no ongoing monitoring of glyphosate in food or people. 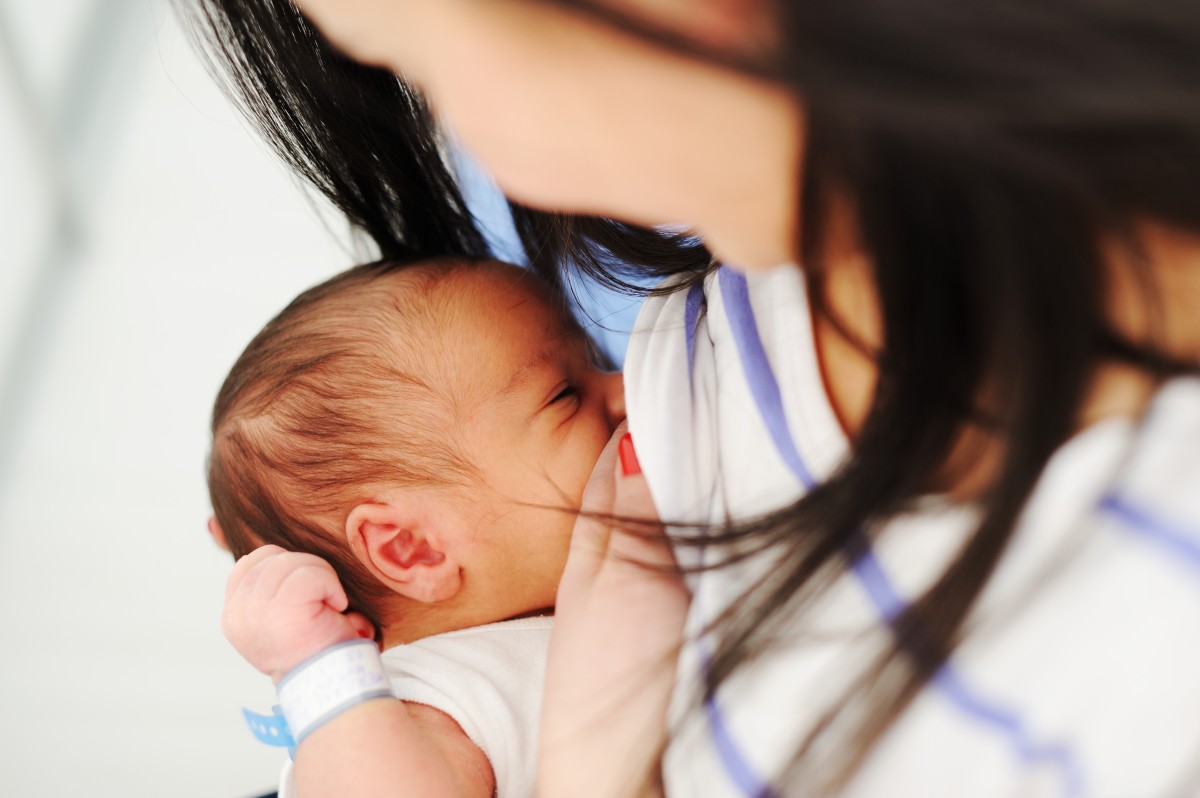 Last spring, an NGO called Moms Across America paid to have 10 women’s breast milk tested for glyphosate, the United States’ most widely used weed-killer. According to Moms Across America founder and director Zen Honeycutt, the testing was not intended to be a scientific study, but rather a small, pilot effort undertaken in hopes of prompting further research.

Use of glyphosate, the active ingredient in Roundup, has ballooned in recent years and Moms Across America was concerned about a lack of data about its presence in the human body. From 1987 to 2012, U.S. farms went from using less than 11 million pounds a year to nearly 300 million pounds, thanks largely to the rapid adoption of corn and soybeans genetically engineered to withstand the chemical. So, said Honeycutt, “We citizens had to do something that government and manufacturers were not doing.”

Now, Washington State University assistant professor Michelle McGuire has said Moms Across America, whose testing found glyphosate in three of the 10 women’s samples, “flat out got it wrong.” This conclusion came late last week when WSU announced that its reasearchers had conducted a study that found no glyphosate in any of the 41 women’s breast milk samples that McGuire tested. She and her colleagues went on to conclude that “our study provides strong evidence that glyphosate is not in human milk.” The study shows that “glyphosate, the main ingredient in the herbicide Roundup, does not accumulate in mother’s breast milk,” said WSU in its press release.

Asked about the WSU study, Monsanto said via email that the “McGuire study again confirms the findings of the U.S. [Environmental Protection Agency] and other regulatory agencies that glyphosate does not accumulate in the body. This independent study used an appropriate, precise, and validated analytical method and arrived at a scientifically sound conclusion.”

So what’s going on?

The debate around glyphosate has taken on increased significance since earlier this year, when the World Health Organization’s International Agency for Research on Cancer (IARC) classified the compound as “probably carcinogenic to humans.” Roundup manufacturer Monsanto has asked IARC to retract its report, saying it contradicts regulatory findings that glyphosate is safe when used as directed.

Indeed, U.S. regulatory agencies—including the EPA, Department of Agriculture (USDA) and their counterparts in the European Union—have said that glyphosate, which was introduced in 1974, is safe to use as directed.

But there isn’t much data about how much glyphosate people are actually being exposed to, let alone what the cumulative effects are—either from environmental sources or through food. The Food and Drug Administration (FDA) and USDA conduct regular testing of food for pesticide residues, and the Centers for Disease Control and Prevention (CDC) includes pesticides in its National Health and Nutrition Examination Survey biomonitoring.

Glyphosate, however, is not included in any of these ongoing testing programs. The U.S. Geological Survey has found glyphosate in surface water, in water coming out of wastewater treatment plants, and in rainwater samples all around the country. When the USDA tested soybeans for glyphosate in 2011, it found residue in nearly all the samples, though all registered below the EPA safety limit.

Monsanto said the “CDC and others have not tested for glyphosate in human milk because they are not concerned about any potential human exposure approaching the Allowable Daily Intake (ADI) established by the EPA for glyphosate.” Yet many questions have arisen about glyphosate’s possible health effects. The EPA does list kidney damage and reproductive effects among the potential outcomes of long-term exposure above what’s considered safe in drinking water.

Between studies linking glyphosate to potential adverse health effects and vociferous public debate over the safety of GMOs, glyphosate is now a hot-button issue. And McGuire’s study is not likely to quell the controversy.

McGuire presented her study at last week’s Federation of American Societies for Experimental Biology conference. It is not yet published and has not yet been submitted to scientific journals for publication, McGuire said via email. But scientists often present new and unpublished data at conferences. This also means, however, that the full study, including its methodology, is not yet available and that the study has not yet been peer-reviewed.

While McGuire, WSU, and Monsanto say study results and interpretation were done independently, the test used to measure glyphosate in the milk samples was developed and conducted by Monsanto. Asked what prompted development of this test, Monsanto said via email that the study was, in fact, conducted in response to Moms Across America’s test results.

“After the Moms Across America results were posted,” a company spokesperson wrote, “Monsanto consulted with the researchers [McGuire and her co-author and husband, University of Idaho professor of animal and veterinary science, Mark McGuire] about the data. We all determined that the most appropriate way to address the issues was to conduct another analysis using an analytical methodology that was validated to be precise and specific for the detection of glyphosate in human milk.”

The WSU study results were verified by Covance Laboratories, which McGuire said, in a phone interview, was unaffiliated with the researchers’ universities or with Monsanto. But Covance has done testing for Monsanto on numerous occasions, including of glyphosate and crops engineered for glyphosate tolerance. McGuire is also a national spokesperson for the American Society for Nutrition, of which Monsanto is a sustaining member.

There is also a substantial amount of tit-for-tat going on between those associated with both McGuire’s study and Moms Across America. McGuire and Monsanto say the test method used for Moms Across America’s samples was not appropriate. Bruce Hemming, president and CEO of Microbe Inotech Labs, which conducted this testing, disagrees. It’s “very sensitive and was developed initially for water but then for urine and breast milk,” he said. “It’s not only validated by us but by the supplier of antibodies and reagents” for the assay, he told Civil Eats.

Additional details raise more questions. Among them is the WSU press release’s assertion that the EPA is using McGuire’s study “as part of an ongoing review of glyphosate regulations.” Asked for details, McGuire said via email that she could not comment on this. The EPA said (also via email) that McGuire’s data had not “at this time” been submitted to the agency.

So, what’s the take-away? These are two small sets of data acquired using different methods that found very different results–one conducted by a volunteer-run NGO that campaigns against GMOs, the other by university researchers with support from Monsanto.

What this scenario points to most clearly, said Charles Benbrook, adjunct professor in WSU’s Department of Crops and Soil Science, is a “need for more impartial, highly credible science about glyphosate residue and exposure levels.” Asked about the government’s role in providing such science, Benbrook cautioned that the U.S. government has a lot riding on the safety of glyphosate-dependent, genetically engineered crops. “The best opportunity for independent science will have to come from outside the U.S. or outside the government,” he told Civil Eats.

Benbrook said he is concerned about the lack of information on food residues, given the recent enormous expansion of glyphosate use, including its late season, pre-harvest use, which often happens close to when crops go to market. “What information is available suggests dietary exposures [in the U.S. and elsewhere] are going up,” said Benbrook.

The EPA plans to complete its own study, which will include “preliminary testing of breast milk” for glyphosate in October. The agency also expects its new review of glyphosate to be available by the end of the year. Meanwhile, the Moms Across America team and other NGOs say a large study of biomonitoring samples is underway, and they expect results to be peer-reviewed and released next year.

Meanwhile, Americans remain without substantial information about the presence of glyphosate in the food supply, let alone in their bodies. Monsanto said neither are issues of concern. But Stacy Malkan, co-director of US Right-to-Know, said, “Obviously, people are concerned. We need widespread testing by credible independent sources.”

Honeycutt also stressed that Moms Across America still views breast milk as “the number one choice,” adding, “We‘re doing this only because we want a healthy future for our kids.”