This Sliding Scale Café Takes Food Access to the Next Level

At the Denver-based SAME Café, customers pay what they can. 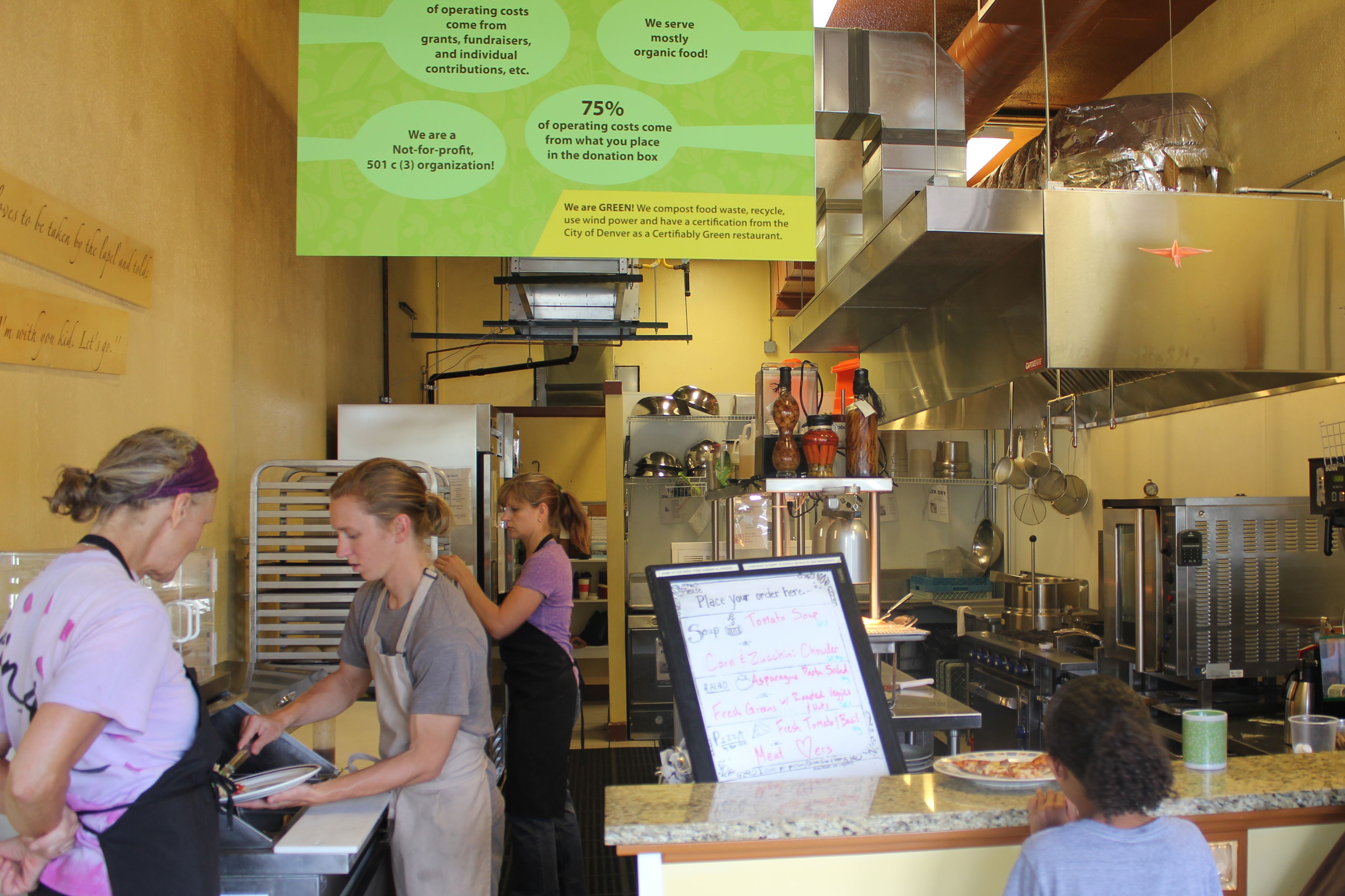 SAME Café co-owner Libby Birky says it isn’t uncommon for people to stand confused at the front entrance of this Denver, Colorado, lunch spot, trying to understand exactly how to order a meal. What looks like a casual restaurant is actually a community café—a new, but increasingly popular, business model using a “pay-what-you-wish” approach. Customers walk in, place their order, and sit down with their food. Most diners do pay for their meals—about 75 percent pay something—but none are handed a bill.

SAME, an acronym for So All May Eat, is a donation-based restaurant—the only non-profit restaurant in Denver. Customers pay what they can for their meal, work off their bill (one hour of volunteer work = one lunch), or eat for free, with the assumption that they will give what they can next time. One of the café’s goals is to provide meals with dignity and not shame anyone who cannot pay.

Husband-and-wife founders Libby and Brad Birky believe that everyone should have access to healthful, quality food, regardless of their ability to pay. Their belief has translated to a viable business: SAME Café has served 115,000 meals since it opened in 2006, according to its 2014 annual report.

The income from meals served covers about 60 percent of the restaurant’s expenses, and the Birkys raise money to cover the rest. According to Libby, other community cafés often post suggested prices which increases their revenue. The Birkys decided against this option because they wanted to offer free meals to those who need them. 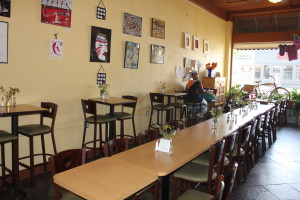 A seven-member volunteer board of directors leads committees to help with fundraising, grant writing, marketing, and other administrative necessities. SAME Café also hosts a few fundraisers each year, such as the annual golf tournament it has coming up at the end of July and its quarterly Seasonal Meal—a $30 fundraising dinner featuring food from local farms. Through these various approaches, the Birkys scrape enough together to keep the café open. But it’s not always easy.

SAME Café ended the year financially in the red for the first time in 2014. Three grants that SAME Café had received in the past were not renewed, and Birky says the change corresponded with a shift in the community at the restaurant. “It started off with a couple of people who were abusing the system and using our restaurant for a free meal. The trend grew quickly and we were giving away more and more food without getting anything in return,” she adds. “Finally, I just got behind the counter to restore the community we were looking for.” The pay-what-you-can model works as long as people actually pay what they can. It may be only one or two dollars, but every dollar matters.

To offset food costs, SAME Café has also worked out a partnership with the Denver Botanic Garden, which donates half of the produce it grows to SAME Café (about 500 pounds per growing season). The restaurant also buys produce wholesale from about a dozen local farms.

The food is simple but nourishing, as the café’s many five-star reviews on Yelp will attest. The volunteer-run restaurant is open for lunch six days a week, offering a daily menu with two varieties of pizza, salad, and soup daily, made from locally grown, organic ingredients. SAME Café’s unusual model also creates an atmosphere that is palpably different from that of other restaurants. Community tables in one long row through the middle of the dining room encourage conversation and interaction between customers. Libby says it’s not uncommon for people to walk in as strangers and leave as friends. 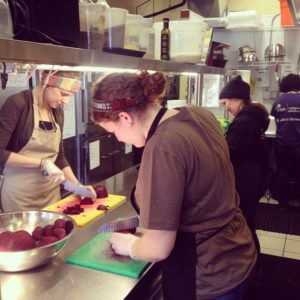 On a recent visit, the café was serving both creamy asparagus and French onion soup, roasted root veggie and mixed greens salads and two pizzas—one with both feta and olive, and another with bacon and blue cheese.

When the Birkys opened SAME Cafe nine years ago, there was only one other such restaurant: One World Everybody Eats in Salt Lake City, Utah. Since then, about 50 such restaurants have opened around the country, with more than a  dozen in the works.

According to Birky, “most people respond with surprise and awe” when they learn about the business model. If they have any qualms about the system, they “keep their comments to themselves.”

SAME Café has shown that the “pay-what-you-can” model is fiscally possible, even if it takes hard work. For the Birkys, the daily benefits are intangible—and absolutely worth the effort.