In cities like Oakland and Seattle, where the minimum wage is on the rise, restaurants are raising prices and rethinking tips as a way to level the playing field for workers. 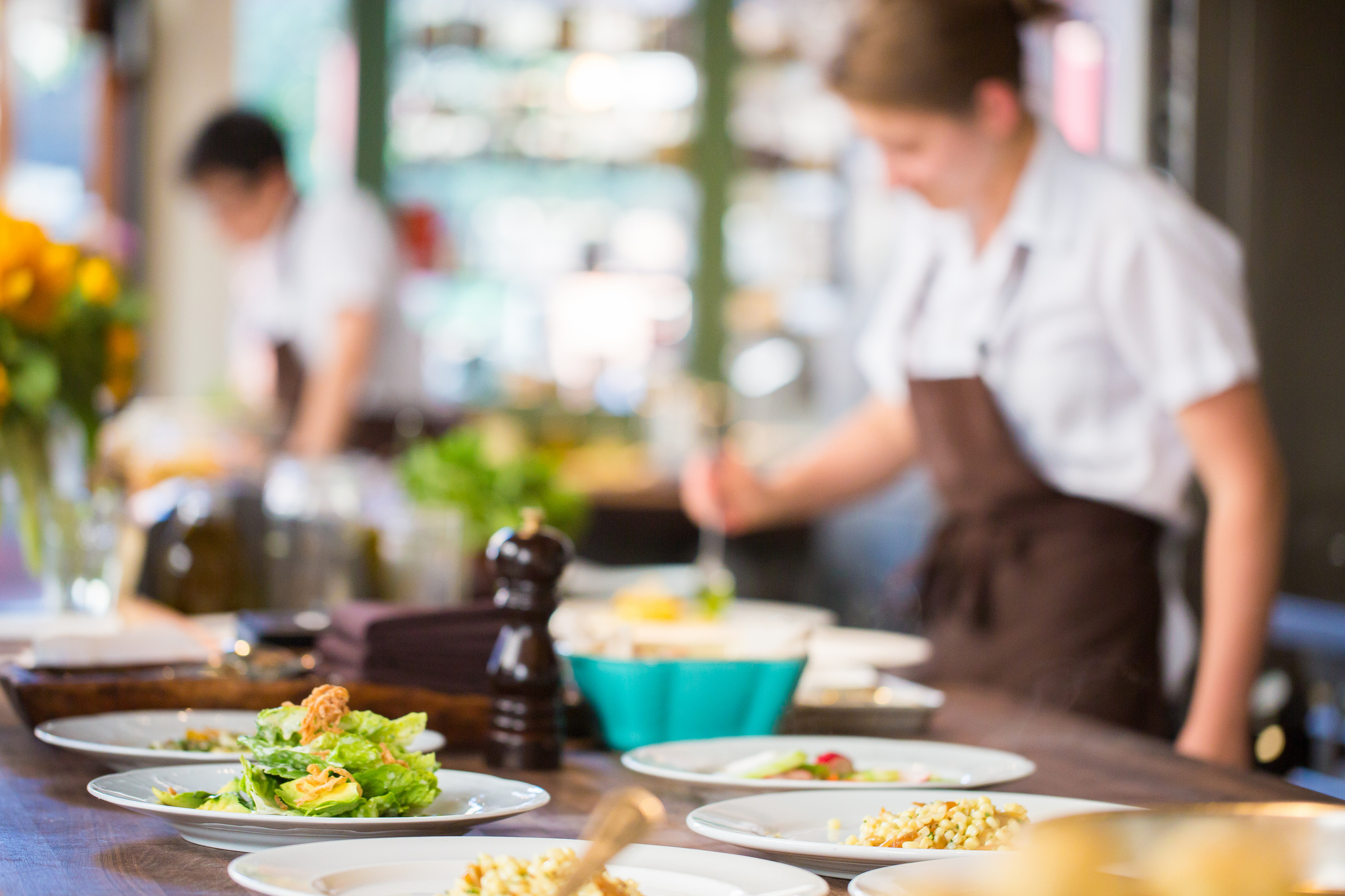 A new message appearing at the top of the menu at Camino, a high-end restaurant in Oakland, California, declares the end of an age-old American practice. “No more tips!” it reads. “Our prices now include service so we can pay our employees a living wage.”

The new prices—which have gone up 22 percent, and which now range from $29 to $37—and the restaurant’s corresponding tipping policy went into effect earlier this year, around the time the city’s minimum wage rose 36 percent to $12.25. And the two are related. While the new policy probably won’t put more into pockets of Camino’s decently paid servers, it will do something quietly revolutionary: it will help them offer a living wage to their (traditionally underpaid) cooks, dishwashers, and bussers.

Camino’s husband-and-wife co-owners Russell Moore and Allison Hopelain shared their philosophy on the restaurant’s website: “We have tried to instill a sense of teamwork at Camino—a place where each member of the team—waiters, bartenders, cooks, hosts and dishwashers—is all involved in serving our guests. And yet, we have been paying them as if we are running two separate businesses.” But the new policy changes all that.

A server working on a recent weekend seemed optimistic, although she has the least to lose from the new arrangement. Her new hourly wage is livable, she said, even if it means she never walks away with the occasional motherlode of tips in the high season. “If you’re willing to stick it out through the year, it makes up for the lack of big nights in the high season on slow shifts, during the less-crowded times of year,” she said.

“It means that all employees are paid based on their experience and have room to grow,” says Hopelain. “We offer any employee who is scheduled for five shifts a week health insurance and we do not cut shifts when we are slow.”

While a handful of cities across the country have plans to raise their minimum wages over the next five years, only a few have put the rubber to the road. Like Oakland and San Francisco, Seattle is taking a tiered approach to raising its minimum wage (i.e., different businesses are required to increase wages at varying rates, depending on their size) with the goal of hitting $15 an hour by 2020. While restaurants are inevitably passing some of these costs on to their customers, many are also taking the opportunity to develop progressive pay models that could begin to level the playing fields between the front and back of the house.

Raising food prices to replace tipping is only one of the approaches Oakland restaurants are taking to survive the wage hike and redistribute the wealth.

At several other restaurants around the city, such as Toast, Boca Nova diners now pay an added 15 to 20 percent service charge. Although it doesn’t make a big difference in the final amount paid, service charges might be an easier pill for some customers to swallow than higher menu prices.

Dr. Michael Lynn, a professor of consumer behavior and marketing at the Cornell University School of Hotel Administration, says that his research shows that, “people don’t think about the tip as a part of restaurants’ expensiveness.” The same goes for a service charges, he adds. “So voluntary tipping and service charges are roughly the same in terms of perceptions of cost.”

In both cases the goal is to improve living conditions for the lowest paid workers in the chain—while paying their bills and retaining their most valuable employees.

An Industry Rife with Inequality

The American restaurant industry can be seen as a microcosm for the nation as a whole, in that it has long upheld a strong class divide. On the one hand, you have servers, bartenders, and hosts who run the “front of the house” in high-end restaurants. These jobs are often seen as a means to an end, a notorious way to help finance higher education and beginning careers in the arts, or—in some cases—a path to advance to a higher-profile career in the food world.

But for back of the house workers, as well as servers in lower-end establishments and most casual chain restaurants (think: the thousands of Red Lobsters and Olive Gardens around the country), that’s simply not the case. The median hourly wage in the restaurant industry, including tips, is just $10, compared with $18 outside the restaurant industry. And just as they do in our nation at large, gender and race play an important role in this divide.

According to Saru Jayaraman, director of the Food Labor Research Center at University of California at Berkeley and co-director of ROC United, “Seventy percent of tipped workers are women–women who suffer from deep poverty.” In fact, one in six restaurant workers lives below the poverty line. Furthermore, the current approach to paying tipped workers tends to compound these problems. While a handful of states don’t differentiate between the minimum wage for tipped and non-tipped workers, many pay them much less, and the federal minimum has been $2.13 since 1991. (ROC United has been campaigning to do away with tipped minimum wage entirely in recent years.)

In light of this context, the move away from tipping appears all the more progressive. But the big question is: Will the restaurants working the hardest to level the playing field for their employees be able to survive the shift?

Bednarz says he raised his prices by 9 percent to account for the wage increase, and after an initial uptick in business, he’s seen what he calls “softness in certain areas of business,” including the café’s counter lunch and breakfast service, which he says are more price sensitive than the table service they offer in the evenings. He hasn’t moved to a service charge because, he says, it just isn’t possible for counter service.

The Actual Café’s location hasn’t helped either. “We’re a block away from the city of Emeryville and a few blocks from Berkeley,” Bednarz. “The fact that our minimum wage went up before those other cities meant that some of our most price-sensitive customers probably went elsewhere for their lattés.” In the long term, he says, he trusts that those cities will follow suit with higher wages, but Bednarz is nervous about the long-term viability of his and other small businesses that run on extremely tight margins.

“I believe that the long-term macro-economic forces at work here will put more money into lots of workers’ pockets and wages will go up everywhere, creating more disposable income for folks. And retail prices will go up as a result of folks paying higher wages. So I’m not sure which will be the stronger force. We may end up paying our workers more, but they’ll have less spending power in the end. It’s too early to tell.”

In Seattle, several restaurants are responding to the city’s recent wage increases and getting out ahead of the coming ones, including casual seafood restaurant Ivar’s and the higher-end Sea Creatures chain, which have both gotten rid of tips and brought all their workers up to at least $15 an hour.

The decision, says Sea Creatures co-owner Jeremy Price, came as a result of a combination of the rising city wages, the need to provide health insurance for their workers via the Affordable Care Act, and a philosophy that he describes as “not loving tips in the first place.”

All the Sea Creatures Restaurants now include a 20 percent service charge, added on to the bill. And there is no longer a space on the credit card slip for tips. Price says his customers have been quick to adapt to the change, and some even leave small cash tips when they are especially happy with the service. “We’ve had very few complaints,” he says.

As at Camino and other Bay Area restaurants, Price and his partners have set up a system that maintains server pay of $31 to $40 an hour (including both wages and a percentage of the service charge), and now servers are also eligible for health insurance and a 401K retirement plan.

“We didn’t have a ton of cooks making less than $15, but now they are all making at least that,” says Price, who estimates that, “If you aggregate all the cooks, it’s around a 7 percent increase.”

Price says the company has seen more people sign up for healthcare and 401K plans than expected. The service charge isn’t covering all of that cost, he says, so Price and his co-owners are taking pay cuts.

“Our goal is to attract and retain the best people,” he adds. “So long-term, this is going to be a win for us, and we’re willing to take a pay cut to get there.”

Indeed, ROC’s Jayaraman says the forward-thinking restaurants she’s encountered feel that investing in their workers pays off in the long term. There’s usually less turnover, she says, which saves costs. But that’s not all. “They also see more invested employees interested in protecting their employers’ bottom lines by reducing things like energy costs, and reducing food waste,” she says.

It also has the potential to prompt a deeper sense of commitment to the work in other ways. The goal at Sea Creatures, Price says, “is making service work a little more professional, creating a situation where people can treat it like a career.”

At a time when the bulk of American workers are seeing wage stagnation, increasing income inequality and many employers’ move toward less-formal contract and temporary employment, this is no small deal.

Camino’s Hopewell sees the shift as an opportunity to approach the way her employees work in a whole new way–one that views the restaurant a little more like a single, living organism. “If there is a service issue, we address it as a restaurant concern. It is not just the server who gets a bad tip,” she says.