What it Takes to Make a Decent Living Raising Ethical Meat

With their new book, Rebecca Thistlethwaite and Jim Dunlop address the business side of pasture-based meat operations. 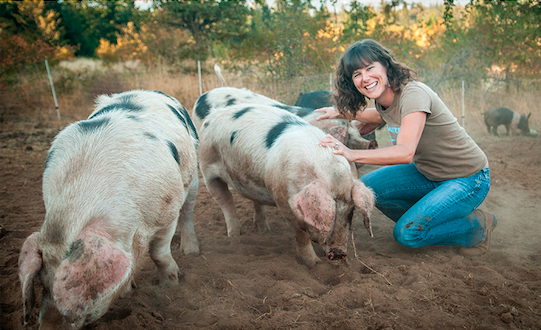 When it comes to raising farm animals, Rebecca Thistlethwaite and Jim Dunlop have been swimming against the tide for years. The husband-and-wife team ran a pasture-based pork and chicken operation called TC Ranch on 20 rented acres in California for six years. Now, they’re raising animals and farming crops on five acres in the Columbia River Gorge, an hour and a half east of Portland, Oregon. They’ve seen the challenges of raising animals responsibly first hand, and they’ve also travelled the country interviewing small producers for Thistlethwaite’s first book, Farms with a Future.

Now, Thistlethwaite and Dunlop have written The New Livestock Farmer: The Business of Raising and Selling Ethical Meat, to provide key information to beginning farmers—and those transitioning to pasture-based production and local sales.

The book goes in depth about farm animal species, as well as marketing and finance, and presents an honest picture of the challenges of selling meat on a small- to mid-size scale. It also draws on numerous interviews with farmers, butchers, processors, and others to paint a portrait of the remarkable creativity these people are using to build an ethical, sustainable meat market in America.

We spoke recently with Thistlethwaite about the new book and the impact she hopes it will have.

For whom did you write this book? Who is your ideal reader?

The book is for everyone from the beginner farmer—who could still be an armchair farmer, just dreaming and scheming—to someone who’s been raising livestock for years, but maybe wants to start direct marketing some of their own meat. The majority of livestock producers don’t direct market, they sell their meat at auction or contract it to a meat packer, so a lot of them struggle to make money. Hopefully this will provide some information and inspire them to get off that hamster wheel. I also think meat processors, butchers, and consumers who are interested in the meat supply chain will find it useful as well.

I couldn’t help but notice the word “business” in the title of your book—that’s not something you see on the cover of most farming books. Was that intentional?

We wanted to solidly place this book in the realm of how to make money. While my husband and I were preparing to write our book, I bought a book on goat husbandry that promised “everything you need to know about goats.” We read it cover to cover and there was almost nothing for someone who would want to raise goats commercially. It was basically how to coddle your goats and throw money at them. We want people to make a living farming, and live well, so that we can get more animals out of the factories and onto pastures.

Do most small farmers struggle financially? 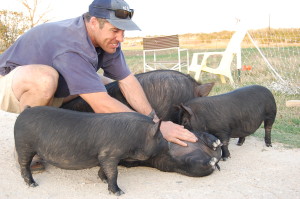 We certainly found people to highlight in the book who are making it work. But the majority are struggling and that’s why I wanted to bring in the business savvy. If a livestock farm is going to be profitable, the farmers have to do things like maximize the whole carcass, find markets for everything, and know how to price their products. I’ve seen so many people make up a price, but we want farmers to understand what it costs them to produce an animal and how much they want to make as profit, and then decide on the price. It doesn’t always work perfectly, of course. People may balk at the prices. But we want farmers to at least start thinking this way.

It was refreshing to read about the challenges and ethical conundrums you and your husband faced while farming in California. However, a person going into farming could be scared off by your experience and the challenges of direct marketing. Should they be?

I’d rather people know what they’re getting into than go into it blindly. I see a lot of young folks going into farming with idealism, which is great. But it’s really important to set yourself up for overcoming the potential challenges. In our situation in California, we were making a mediocre pie. We knew we weren’t going to reach the holistic goals we had set for our family. And then there was crime in our area, and the drought. It got to be too much. Now we’re in a different place and trying to figure out if we have the right ingredients here in Oregon. We do have some of them, but we’re in a very rural place and have to drive a lot to access farms and markets. So we’re mainly raising animals for home consumption and for barter. And that’s okay. We’re thinking of starting a meat buying club for the greater Portland area, working with 10 or 15 different farmers. Our role would be curating the best meat from the most sustainable producers and then getting it to customers.

As you interviewed dozens of farmers for The New Livestock Farmer, did you notice commonalities?

None of the farmers we spoke to rest on their laurels, and none are content with just creating a model and keeping it there for the rest of their lives. They’re all creative thinkers and they are constantly trying to improve their practices and find new ways to reach more consumers. A common message I heard was that they don’t want their products to be seen as exclusive or elitist. For instance, Greg Gunthorp [a mid-scale farmer in Indiana] would love to see his meat in the grocery store in his little rural town. He knows it won’t happen anytime soon, but he doesn’t want it to be just for wealthy people.

Farmers shouldn’t have to solve the poverty issue in this country; income inequality can’t be solved by providing cheap food, and the solution shouldn’t rest on the backs of farmers. But that said, a lot of creative farmers are thinking of different ways to get their goods into the broader marketplace. Some, for example, are trying to get lower end cuts priced more cheaply and sold by local retailers. Or there are people with retired laying hens who are selling them as inexpensive live birds to immigrant populations.

You note in your book that the overall number of farms raising animals in the U.S. has declined. Do you think it’s possible to attract enough new people to farming to tip the scales toward pasture-based agriculture in America?

In the 2012 [Agriculture] Census, I thought we’d see an uptick in the total number of farmers because of all the programs out there to incubate new farms. But the number dropped primarily because there’s been such an exodus of mid-scale producers—they canceled out the influx of new small farmers. Those mid-scale producers are the bread and butter, the backbone, of American agriculture, but they’re often too big to direct market their meat and too small to vertically integrate and join commodity markets.

So the statistic made me sad but it also made me realize that I don’t think we’re ever going to see that great resurgence of the Jeffersonian ideal, where we all go back to the land. I think it’s going to continue to go in the opposite direction, with urbanization and technology and the rural exodus of our young people. I’d love to see it, but it would be fighting against human nature. What I’m hoping to see, through more training and books like mine, is small farmers farming on a slightly bigger scale and making a bit larger portion of their living from farming. It’d be great if people could step it up a little and stem the tide of mid-scale farmer loss.

If small farms aren’t going to dominate American agriculture in the near future, could their role be to influence the practices of large-scale food companies?

Yes, one of the roles of the small farm is to move the needles of the big players. The large number of big producers who are moving towards antibiotic-free meat is a step in the right direction. I don’t know how much farther they’ll go after that, but getting millions of pounds of antibiotics out of the supply chain is significant. It’s like that with Big Organic, too. There are so many things wrong with it, but it’s keeping millions of pounds of pesticides and fertilizers off the ground and exposing fewer workers to toxins.

You suggest in the book that farmers should raise animals that are a good fit with their particular land, rather than fit their land to accommodate their animals. Does this mean we should move towards geographically appropriate agriculture in this country?

Yes, we need to be practicing regional agriculture and we need to convince consumers to eat regionally. My husband and I have five acres that are primarily grassland with big oaks on it, so we’re testing out acorn-fed pigs, and seasonal sheep, and we’re trying ducks and chickens because we have a big pond. We could easily ramp up and get 20 sows, but then there’d be no pasture for the pigs so it would turn into a dirt lot and it would degrade the land base really quickly. Maybe we’ll raise a few animals for the meat buying club, but we’ve come to the conclusion that we need to practice regional agriculture.

Why did you use “new” livestock farmer in the title of your book?

The “new” in the title doesn’t just refer to new farmers. It also refers to a new way of looking at livestock husbandry through a triple bottom line—economics, the environment, and social responsibility. People have raised animals humanely for a long time—that’s not new. People have also been raising animals profitably. But now the idea is that with high welfare, sustainable livestock producers look at all of those things and incorporate all of those values into their production. Nobody is perfectly sustainable, but it’s a learning process that’s open to everybody.