Assisted migration may be necessary to prevent extinction of some bumblebee species in Europe and North America. 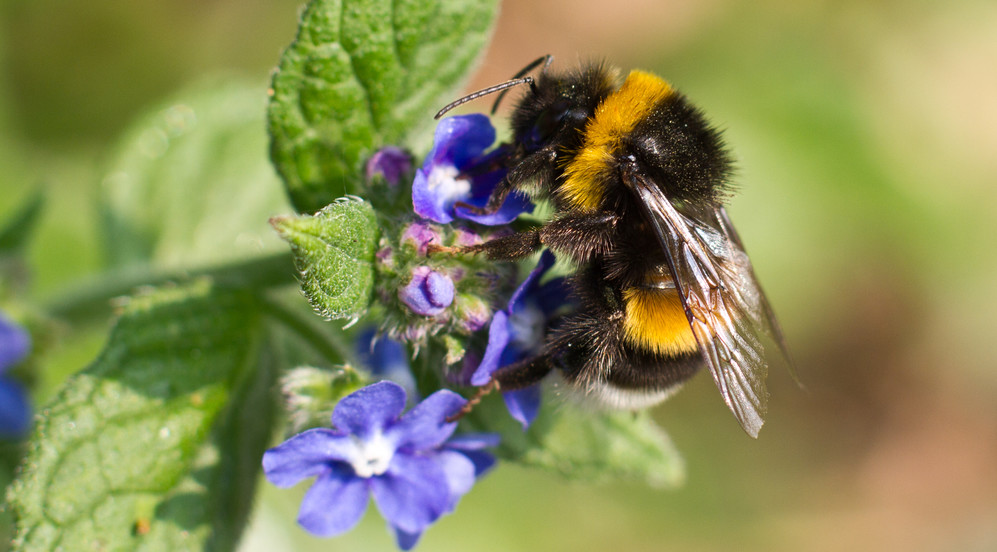 As Earth’s temperature rises, many species have been expanding their territory further north while continuing to cling on to the southern (more rapidly warming) edges of their habitats. The new study has found that the northern populations of many bumblebee species are staying put while the southern range edge is retreating away from the equator.

“Picture a vice. Now picture the bumblebee habitat in the middle of the vice,” says Professor Jeremy Kerr of the University of Ottawa, a macroecology and conservation expert who led the study conducted by a team of 14 researchers from across North America and Europe. “As the climate warms, bumblebee species are being crushed as the ‘climate vice’ compresses their geographical ranges. The result is widespread, rapid declines of pollinators across continents, effects that are not due to pesticide use or habitat loss. It looks like it’s just too hot.”

For their study, the researchers examined more than 420,000 historical and current records of 31 bumblebee species in North America and 36 in Europe. The 110 years of records that the team examined show that bumblebees have lost about 185 miles from the southern edge of their range in Europe and North America. “We are not seeing bumblebees effectively fleeing to the north,” Kerr said during a press briefing on Wednesday. “We think we are simply losing the southern populations. The scale and pace of these losses are unprecedented.”

The shrinking range of these wild pollinators is bad news not just for agriculture (bumblebees are crucial for pollinating tomatoes, sweet peppers, strawberries, and blueberries, all of which have “stubborn flowers” that don’t give up their pollen easily),  but also for many other plants that birds and small mammals rely on for food and shelter. The researchers warn that if we don’t act immediately to stop the decline of bumblebees, we may well face higher food prices, diminished crop varieties, and other ecological problems. The loss of bumblebees could have far greater impact upon overall pollination rates in the environment than the loss of a similar number of other bee species, Kerr says.

“Unlike almost all other wild bees, [bumblebees] are active from spring all the way through summer and late into fall. As a result, the kind of flowers bumblebees are capable of pollinating is far greater than most other bees,” he says. In fact, he says, something like 30 percent of bee species (there are 20,000 plus in the world) will only pollinate one of few closely-related species of plants, and most bees are only active for two or three weeks a year. Evaluating the exact impact of the bumblebee decline on pollination will require extensive research, Kerr says.

It’s not quite clear why the bumblebee’s loss of terrain is so rapid, but one explanation could have to do with evolution, the researchers say. Other insect species, like butterflies, that have shown more a positive adaptive response to climate change originated and evolved in the hot tropics. Bumblebees, on the other hand, originated some 35 million years ago in the cool-to-temperate environments of the Palearctic. While this makes them excellent pollinators in cool weather regions — they can forage in cold, unfavorable weather conditions including rain and even snow — they don’t do so well under sustained hot weather conditions.

However, this doesn’t explain why these bees aren’t moving north to escape the heat like many other plant and animal species have been doing in recent years. The researchers posit the bumblebees’ slow growth rate as a possible reason. A well-established bumblebee nest will have 400 bees, whereas a honeybee hive will typically contain up to 50,000 individuals.

“There are two factors that essentially limit whether or not species track shifting climatic conditions: Whether or not they disperse well — clearly, bumblebees are pretty well at getting around, so that’s not the issue. But the second one, the capacity to grow their populations quickly once they have arrived in a new place [could be the problem],” Kerr says. “This population growth rate limitation, we suspect, may be implicated as the key limitation on their capacity to shift north into colder areas.”

Along with stressing the need for urgent action to curb greenhouse gas emissions to address this problem and creating “safe havens” or “climatic miro-refugia” for bumblebees in the southern regions, the research team also suggested another, rather controversial solution — moving bumblebee populations into areas further north from their current distributions. Kerr says that we need to contemplate this kind of “assisted migration” at continental scales. “Just as human activities caused climate change today, bumblebee species may need human intervention to help them establish populations in cooler and more northerly environments,” he says.

The idea of assisted migration has been around for more than a decade and has been the subject of much debate among conservation biologists, mainly because of the uncertainties and risks associated with moving a species into a new habitat. One of the common concerns is that the introduced species might turn invasive and out-compete native species. But many biologists now accept that it may be the only way to save some species from extinction.

“I think that moving species in order to protect them from extinction is an unfortunate inevitability,” says Dr. Mark Schwartz, a conservation biologist at the University of California, Davis. But such decisions need to be carefully evaluated, he says. For instance, more research should be done into finding out how losing bumblebees is impacting each local ecosystem. Perhaps there are other local pollinators that can fill in the gap? “Quite a lot of our invasive species problems have developed as a result of thinking of moving as a simple solution,” he says.

Dr. Jessica Hellmann, a conservation biologist at the University of Notre Dame who is well known for her research into insects and climate change, says it’s unlikely that bumblebee species — given their relatively low growth rates — would become pests in their new habitats. “Even if they are not pests, however, an introduced bumblebee could still impact other bumblebees in the introduced area,” Hellmann says. “This is probably the biggest concern and would require study to see what effect an introduced bee would have on other close competitors.”  But Hellmann agrees that in areas where pollinators in general are on the decline, moving a species could be an effective way of sustaining pollination services, and would make sense “if the bee is pollinating an economically valuable crop.”

Kerr admits that there ethical and ecological implications of moving bumblebees “dozens or 50 or 100 kilometers further north” that need to be considered. “We are not trying to suggest that what we need to do is drop everything and start engaging in assisted migration across continents. But what we do need to do is have a thoughtful and quick conversation internationally as to whether these efforts may be required for some groups of species,” he says. “It’s important to remember that the backdrop here is global climate change. We are changing conditions around the world at a pace that is unprecedented for at least several million years. If we are interested in conserving species like the bumblebee for the future it is possible that we will need to intervene in a significant and extensive way to help them adapt.”