With his new memoir, the food and agriculture policy columnist talks about his farm roots. 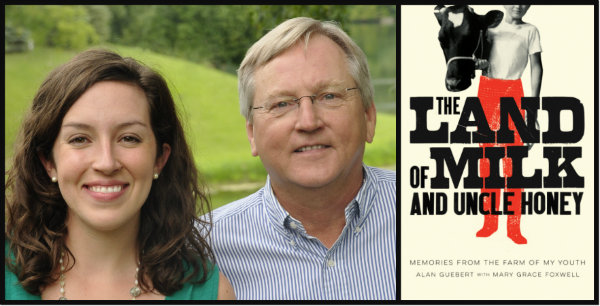 Alan Guebert is an agriculture insider. For the last two decades, he has been chronicling and responding to farm politics in the award-winning and popular syndicated column “The Farm and Food File” from his home in Southern Illinois. Now, he’s hoping to reach out beyond that audience with a book he has co-authored with his daughter, Mary Grace Foxwell, called The Land of Milk and Uncle Honey: Memories From the Farm of My Youth.

Based on a collection of Farm and Food File columns, as well another called “Letter From America,” which ran in several foreign markets and explained and often criticized farm U.S. policy, the book also paints a picture of pre-industrial farming, or what Guebert calls “the first farm-to-table people.” It also slyly offers an optimistic blueprint of how today’s farms might return to a way of growing food that thrived before multinational food companies bought up much of the food system.

Guebert, whose column now appears in 70 newspapers, grew up working with three brothers and a sister on Indian Farm, a 720-acre dairy operation in Illinois. By the mid-1970s he went off for college to earn a degree in science and agriculture.

Guebert says he initially wanted to farm, loving “the seasons, the people, the rhythm to it. Everyday you contribute something to someone’s world.” Instead, he began writing about farming. Before starting his column, he worked as an editor at Successful Farming magazine in Des Moines, Iowa, and as a contributing editor at Farm Journal.

“Long before the Slow Food movement took to Facebook and urban foodies flocked to Twitter,” Foxwell writes in the book’s introduction, “Dad recognized the complex convergence of farm and food issues, and in 1993 he decided he was up to the challenge of reporting on them. And while I may not have grasped the broad scope of his ambitious mission at the time, I certainly gathered that my father had an unusual job.”

“I like helping people connect the dots,” says Guebert, citing the recent attempt by giant seed company Monsanto to buy its rival Syngenta. “It’s a story not only of interest to farmers who use the products, but also for everyone who eats, because [Monsanto’s seeds and chemicals] are used in the food we grow. There are endless stories out there about farming and food.”

Guebert and Foxwell have been touring to promote the book this summer, and they are using the platform as an opportunity to speak not only about the history of small-scale farming in the U.S., but also about several big picture issues. As Guebert sees it, Europe has retained a relationship between food and culture (Agri-culture), while most parts of the U.S. have lost it due to corporate farming. But, he says, food culture is slowing returning, with a renewed focus on smaller farms, organic farms, and a growing numbers of younger farmers.

“If you look at where food is headed, you will see that, in many ways, it’s going in the opposite direction of American agriculture,” Guebert told Civil Eats. “Big American farms, are growing less and less food to be eaten. They grow commodities. They grow soy and corn and wheat under the guise of ‘we’re feeding the world’ and they aren’t feeding the world. They are growing these crops to make money.”

Guebert says farmers who own hundreds of acres are often hard pressed to pay for massive farm equipment and other expensive inputs. Overhead costs are enormous. Yet, he points out that if more farms could scale back, and grow food to feed people locally, it could solve many of problems agriculture faces today. He cites the recent study that found that as many as 90 percent of us could eat food grown within 100 miles of their home.

Guebert points to the farm-to-table movement and the proliferation of small and urban farms as proof that our food system is going through great change. But Europe, he adds, has been doing this forever.

“American cities were once surrounded by farms that grew food and raised hogs and cattle. There were hundreds and hundreds of acres dedicated to fruit. Now you don’t see that,” he says. “You rarely see food growing just outside of cities such as Chicago or St. Louis like you used to. And this is the Midwest, where there’s some of the richest soil in the world. And there’s lots wrong with that. We’re trucking our food in from afar; our food supply is dependent on oil.”

Guebert sees the small farmer as America’s hope, yet it’s the large farms that receive most of the local and government support. This is a fact he has been stressing on his tour. Fearless in his outspoken opposition to corporate farming, Guebert urges more young people to take up farming, adding that good food may be what eventually causes the collapse of global food trade and our heavy dependence on fossil fuels.

“People want to eat local and healthy. How many Oreos can you really eat? Good food never goes out of style. Julius Caesar dined on lamb chops, fresh vegetables, and wine. It was a good and elegant meal then and it is a good meal today,” he says.

Other countries are curious about America’s food system he adds. But not always in a positive way. “Europe is interested in how we are able to eat large portions of food and eat it in our car,” he says. “Good food should be part of our culture. If it takes more than three minutes to get lunch, we get angry. We aren’t eating, we are refueling.”