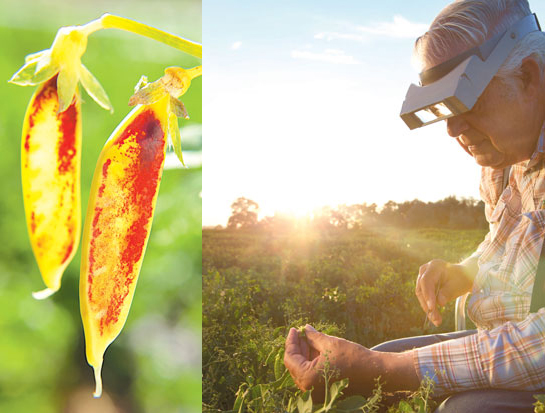 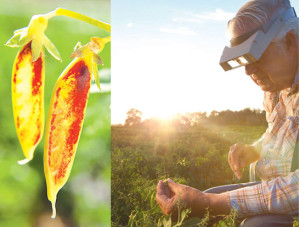 French Laundry culinary gardener Aaron Keefer knew what he cradled in his hands was special. Even legendary.

When he nestled the pea seeds into the ground just shy of spring this year, he had not only pored over a national magazine cover story lauding their distinctiveness, but The French Laundry’s Chef de Cuisine David Breeden had been pestering him for months to procure them to grow in the showcase garden of this landmark Yountville, California, restaurant.

As the weeks passed, Keefer patiently watched the seeds germinate until the plants finally offered up their bountiful splendor: sugar snap peas the eye-popping colors of buttercup, deep maroon, and even sporting showy yellow and inky purple splotches like a palomino horse. There were also tiny, frilly pea leaves with a delicacy belying their intense flavor, and plump, over-sized green peas so sweet they could almost be candy.

They are all the creations of 81-year-old Calvin Lamborn, the pioneering Idaho botanist who invented the original sugar snap pea in 1979. Until this year, only one farmer in the country grew these precious peas: Rick Bishop of Mountain Sweet Berry Farm in New York, who supplied them to such illustrious Manhattan restaurants as wd-50, Union Square Café, The Breslin and The French Laundry’s sister establishment, Per Se.

This year, for the first time, Calvin’s Peas, shoots, and leaves are starring on the menus of a handful of California restaurants. Not just any restaurants, either, but The French Laundry in Yountville, the Restaurant at Meadowood in St. Helena and Saison in San Francisco—all Michelin three-starred establishments with their own culinary gardens.

Peter Jacobsen, the farmer to the (culinary) stars also planted the Lamborn seeds this spring at his Yountville farm that supplies not only The French Laundry, but also Michelin-starred SPQR in San Francisco, where Chef Matthew Accarrino has been gently frying the leaves for show-stopping garnishes. Britain’s Fat Duck alumnus, Chef Kyle Connaughton, and his wife, Katina, already have plans to grow the Lamborn seeds, as well, when they open their Single Thread Farms Restaurant & Inn in Healdsburg this fall.

Breeden, who first worked with the Lamborn colored snap peas and tendrils when he was executive sous chef at Per Se, fairly gushes about them. “The pea tendrils are unique and with such great flavor. They are tender, delicate leaves with a certain toothsomeness. They’re thicker than others so they don’t wilt so easily. I love the colored snap peas, too. They don’t have the stringiness you get from other snap peas.”

That’s precisely why he sent Keefer on a hunt for them. That led the French Laundry gardener to his friend Bishop, who put him in touch with the Lamborn family.

Keefer had grown the Sugar Ann, Lamborn’s most famous green sugar snap pea, which is named for one of Lamborn’s daughters and is the most popular variety now grown the world over. But he had never tasted these newer creations. He took it on faith that they would be worth growing. So much so that when Calvin Lamborn’s son, Rod, who is helping to market his father’s work, offered to give him seeds for free, Keefer rallied his fellow four-star restaurant farmers to give them a shot, too. Never once did Keefer think to hoard these specialty seeds solely for The French Laundry. 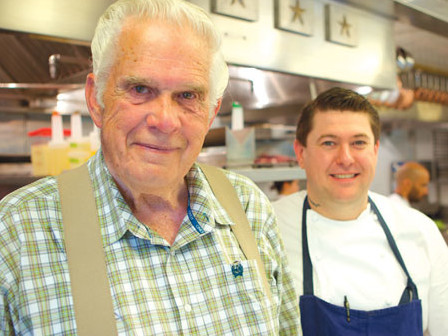 “If it was a limited resource, I would,” he says with a laugh. “But I knew that by sharing them that they would be grown with care and given to chefs who would realize their full potential. At the end of the day, every chef is going to do something different with them. I think we’re all excited to see what happens.”

So is Calvin Lamborn, who still continues his life’s work on his test field near his home in Twin Falls, Idaho, for his aptly named Magic Seed Company. On any given day, the soft-spoken grandfather of 20 might accomplish 40 “crosses.” Using tweezers, he will painstakingly move pollen from one variety to another, then replant the seeds successively one generation after another, all the while combining the desired traits from the additional genetic lines to get closer and closer to what he imagines.

His instincts are typically on the mark. After all, it was the first cross he ever made based on his own hunch that resulted in the first commercial sugar snap pea. Back in 1969, while working for a Twin Falls seed company, he decided to cross a snow pea with a rogue tight-fitted pea pod that had unusually thick walls to see if it would make for a snow pea that was straighter and smoother.

It succeeded beyond his wildest dreams, winning honors, gracing the cover of seed catalogues, and earning plaudits from none other than James Beard.

It took Lamborn a decade after that initial cross to perfect the sugar snap pea. He later went on to develop the first stringless snap pea, an endeavor that took more than 100 crosses.

The names of Thomas Keller and the other acclaimed Northern California chefs growing and using his peas may not be familiar to Lamborn, but he couldn’t be more thrilled to see his handiwork now in their hands.

“I’m in Southern Idaho, where there’s a grill and McDonald’s. There’s no place in Twin Falls that expensive or fancy,” Lamborn says. “What these chefs do is deal with the art of food. I never dreamed my peas would be served in places like this. I’m very pleased to see it happen.”

For their part, the chefs are all hoping to do justice by those peas. Breeden created an entire dish from various parts of the pea plants. “Sweet Peas” comprises a tea made from the pea shells; a cold, creamy Parmigiano custard at its center; the tiniest of peas marinated with salt, pepper and olive oil; and the crowning touch of pea blossoms.

Chef Joshua Skenes of Saison has gone into pea-overdrive with ideas for the Lamborn peas, re-imagining how pea dishes he did the year before will dazzle even more with these.

“Anytime we get a special product, we want it to be used in a very singular dish,” he says. “Last year, we took the pea shells in their early stages and used them whole in a dish you picked up with your fingers to eat. We grilled the snap peas, opened them up and put golden trout roe inside so that they looked almost like glistening peas inside.’’

At Meadowood, Chef Christopher Kostow started envisioning the perfect pea dish even before the Lamborn ones were ready for harvest–a pea “soup’’ of sorts made from the juice of the peas heated with house-made butter, and accented with the tang of black lime.

It’s enough that Kostow knows they are extraordinary. In fact, Meadowood’s garden manager, Christine Kim, took the unusual step of starting the Lamborn seeds in the greenhouse before transplanting the seedlings into the garden.

“That’s not something we do all the time,’’ Kim says. “I wanted to make sure the ravenous birds around here didn’t get them, as they are special seeds.’’

Indeed, of all the items that farmer Adam Rusk is growing this year in Saison’s two-acre culinary garden in West Marin, the Lamborn peas are what he is most excited about.

“Peas are one of my all-time favorite vegetables. They arrive in the new spring season and provide something sweet to eat before all the fruit comes in,’’ Rusk says. “It’s fun to be growing these new varieties that few others have access to. With The French Laundry and Meadowood, we’re amongst great company, too.’’

This article originally appeared in Edible Marin and Wine Country.