Searching for Food You Can Believe in? Eat Well Guide’s New App Has You Covered

The website's latest update has mobile-friendly listings for more than 25,000 restaurants, markets, and farms with a focus on sustainability. 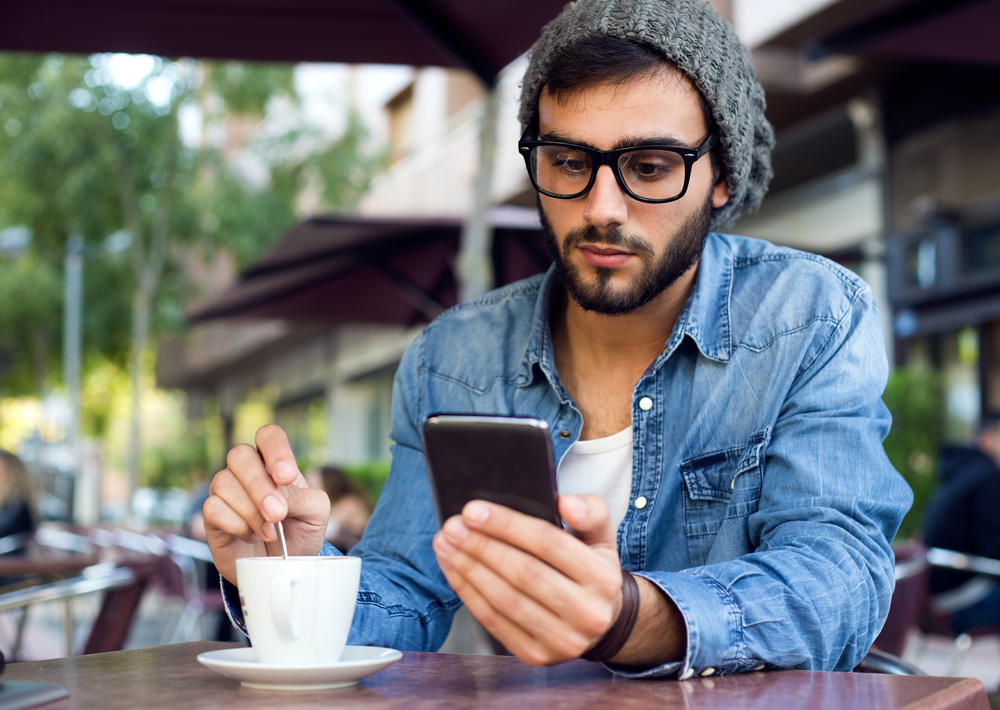 It’s almost impossible to remember Life Before Yelp–that far away time when finding a nearby restaurant or shop required a travel guide, phone book, or recommendation from a friend. Now it’s easy to pinpoint exactly what you’re looking for online, whether it’s a budget-friendly pizza place that takes credit cards or a wine bar with small plates and a back patio.

But it’s still not easy to find out whether or not the sausage on that pizza comes from humanely raised pigs, or the wine bar sources local produce for its tapas. It’s that sustainable foodie niche that Eat Well Guide hopes to fill with its latest iteration. The site now has more than 25,000 free listings of farms, farmers’ markets, restaurants, co-ops, and other places that sell or promote locally grown, sustainably produced food.

Eat Well Guide began as a directory of sustainably raised animal products for the Institute for Agriculture and Trade Policy (IATP), and joined with Sustainable Table in 2003 to become a more comprehensive resource. Both are created by GRACE Communication Foundation, which also produced The Water Footprint Calculator and The Meatrix, a short animated film about the realities of industrial farming.

The latest version of the Guide, released this week, is significantly more mobile-friendly and uses GPS to give you recommendations near you. And they’re not just tips for farmers’ markets and vegan restaurants, either. You can search the site for pizza, burgers, Mexican food, and pretty much any other cuisine or attribute, and find places that share the values of sustainability and environmental stewardship. 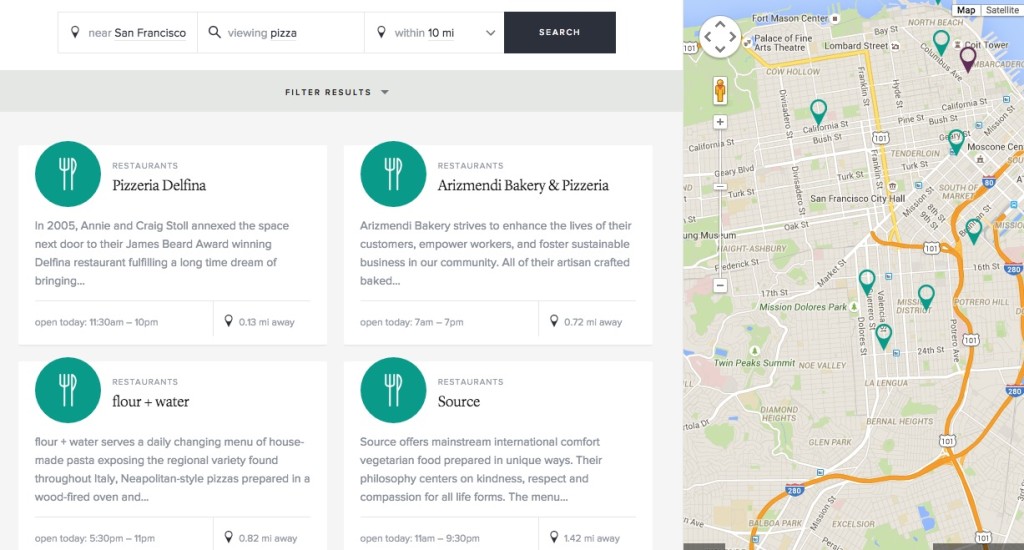 The site is able to do this because an in-house team actually goes in and curates the listings in 18 cities around the country. (Yelp’s crowd-sourced information, on the other hand, doesn’t have much editorial oversight.) Dawn Brighid, project director for the Guide, and four other full-time staff members have been working feverishly over the last six months to update the listings, with a special focus on adding new restaurants, grocery stores, and bed and breakfasts.

To be included in the Eat Well Guide, vendors need to demonstrate a commitment to supporting sustainable agriculture. But that can mean a variety of things to different businesses.

And that’s a big part of the challenge the Guide’s creators face, especially when it comes to restaurants. In an era where greenwashing and “local-washing” is rampant, Brighid and her staff rely on a variety of tools to vet each listing. “In the best-case scenario, everything is obvious on the website,” she says. “They might talk about supporting sustainable ag, or list farms and purveyors they work with, so we can check them out.” But that doesn’t happen all the time, so Brighid makes phone calls, looks for articles about the owner and/or chef, and relies on feedback from past Guide users.

On top of the challenges of researching businesses all across the country from their office in Manhattan, Brighid and her team encounter many businesses with statements about “using organic, local, sustainable food whenever possible.” Indeed, when we called several of the restaurants listed in the Bay Area, we found a range of transparency about sourcing. One pizza place could tell us about the farmer co-op that provided its flour, and the heritage pigs it bought from a nearby farm. Others were much more vague, or told us about the few staple ingredients they sources organically when they could, and their intentions to add more.

When it comes down to it, Brighid says she often has to go with her gut, which can cause her to air on the conservative side. “If they have a farmers’ market salad and ‘all-natural’ chicken and they say they do it as ‘often as they can,’ that doesn’t feel good enough,” she says.

Each location has information about its sourcing and animal welfare practices, when applicable. Listings also contain business hours, a map, and links to websites and social media. A glossary provides more information about everything from biodynamic agriculture to food miles. While the Guide is based on a specific list of standards. GRACE isn’t in the business of providing third-party certification. They also acknowledge that sustainability is a spectrum and not everyone is as far along that spectrum as one would hope. 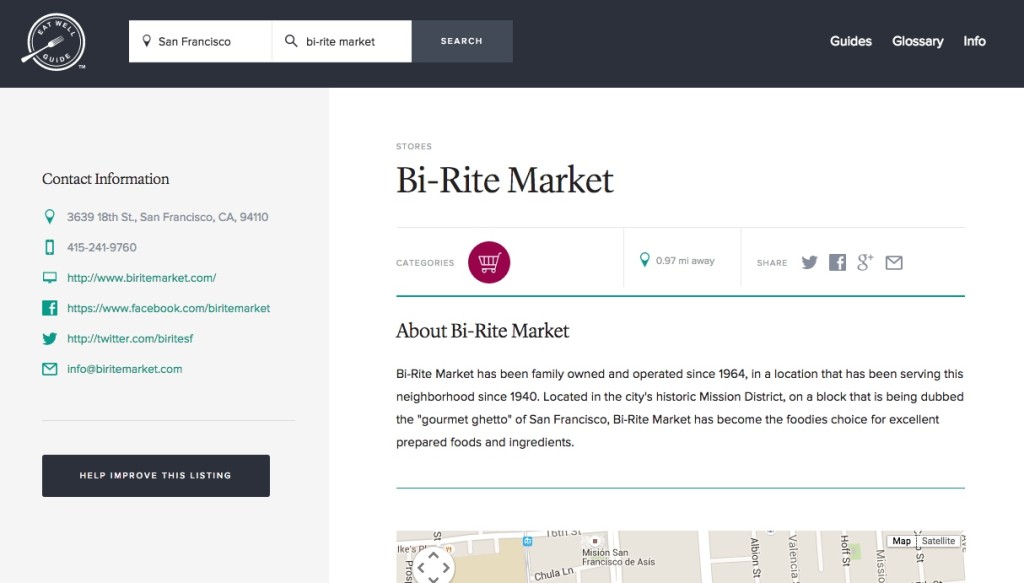 The Guide is also set up to serve users in a wide range of locations. “There are areas of the country where there aren’t a lot of options,” says Leslie Hatfield, GRACE’s communications director. “We want to show people that there are places that are better than McDonalds.”

And while some establishments are more boastful than they should be, many others don’t do enough to make their practices public, says Brighid. “There are probably many great restaurants I have passed up because I couldn’t get more info.”

But that’s also where the web’s crowdsourcing potential enters the picture. Beside each listing is a button users can click if they’ve like to help improve it. “We’re really hoping that people will tip us off if they think something isn’t sustainable, or they see that their favorite sustainable restaurant isn’t in there,” Brighid says.

Along with helping consumers make more educated choices, the Eat Well Guide hopes to give more visibility to vendors. “We know that sustainable food vendors offer products that consumers want, but it’s difficult to compete with the enormous advertising budgets of industrial food producers,” said Chris Hunt, food program director at GRACE, in a statement. The hope is when more consumers can easily find these businesses, the playing field will become a little more level.