These Invasive Catfish Are Destroying the Chesapeake—and They're Delicious. You Do the Math. | Civil Eats

These Invasive Catfish Are Destroying the Chesapeake—and They’re Delicious. You Do the Math.

The Wide Net Project channels blue catfish to shoppers and food bank customers, as a way to help save an iconic watershed. 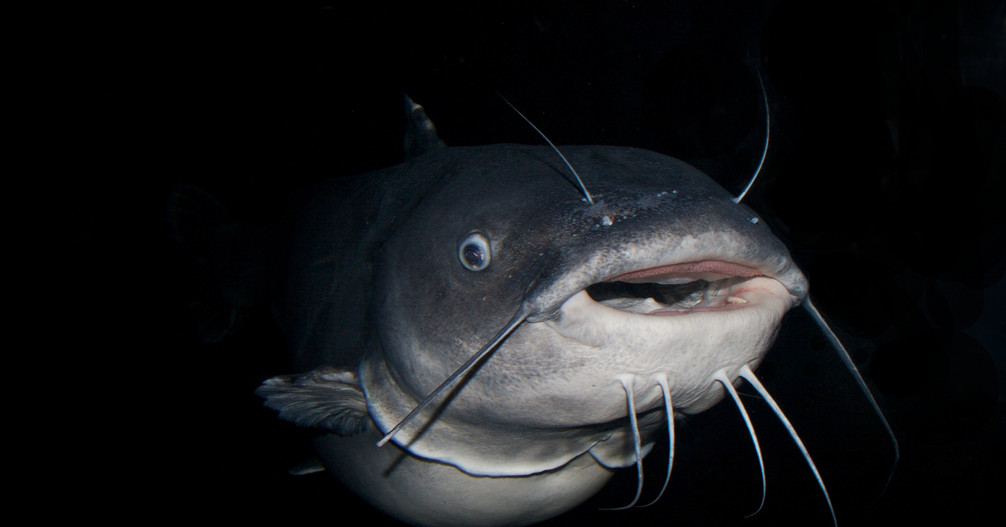 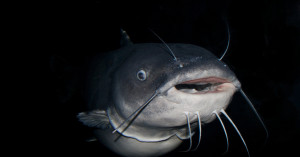 Update: In September 2015, the Monterey Bay Aquarium’s Seafood Watch program awarded a green seafood recommendation, the highest rating possible, to Chesapeake Bay blue catfish. According to the Wide Net Project, it is the first invasive species to be assessed and rated by the program nationally.

For the Chesapeake Bay, a region synonymous with blue crabs and a diversity of native fisheries, the blue catfish is like Shiva the Destroyer. In the last 40 years, the invasive fish has devastated a long-established indigenous ecosystem, crippling local economies that depend on crabs and other marine fauna for their livelihoods.

The Wide Net Project is an effort to reverse the damage already done by one of the area’s most insidious environmental threats. Founded by food systems experts Wendy Stuart and Sharon Feuer Gruber, the young nonprofit works to build a market for blue catfish, while providing free fish to hunger relief organizations in the process.

For all the talk of eating invasive species, few projects exist to help bring these foods to the masses on a large scale. The Wide Net Project, Stuart explains, was created to “get enough fish out of the Bay so that biodiversity is restored.” The group is specifically concerned with the blue crab, a species that is important to the Maryland economy and culture, and is currently threatened.

An opportunistic and adaptable apex predator, the blue catfish was foolishly introduced in the 1970s as fodder for recreational fisherman. Because it will eat most anything and can thrive in both fresh and brackish waters, the catfish quickly began its colonization of the Chesapeake Bay and its tributaries. 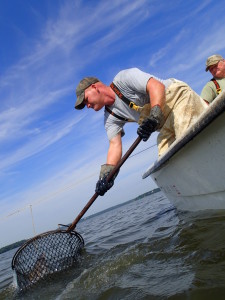 Forty years later, wild populations have skyrocketed in size. Local officials haven’t yet conducted a comprehensive survey, but an attempt by Virginia biologist Bob Greenlee saw catch rates up to 6,000 fish in an hour using a scientific sampling method called electrofishing. The fish themselves have grown too; local anglers regularly pull 60-pound blue catfish from rivers in Maryland and Virginia (the record in Virginia is 140 pounds).

In 2012, the Maryland Department of Fisheries reported an annual catch of approximately 400,000 pounds, but it’s not enough; wild catfish populations continue to swell at unsustainable rates.

“What will happen long-term as far the impacts of blue catfish? We won’t know until the population settles down and achieves an equilibrium,” Greenlee explains.

In the meantime, the Wide Net Project sees the abundance of fish as an opportunity.

“There are millions of catfish in the Bay and no quotas… If you have the systems in place there’s little limit on how much you can provide.”

Unlike blue crabs and many other native marine species, catfish have an unlimited fishing season and can provide income for fishermen year-round. Pursuing them requires little additional equipment and results in minimal bycatch–the Chesapeake’s blue catfish also received the highest rating from Seafood Choices, the Blue Ocean Institute’s rating system.

The only problem is the lack of a market. Historically, catfish have a reputation as a fish-of-last-resort for discerning palates.

So the Wide Net Project co-founders have built relationships with everyone from regional restaurateurs to the food service giant Sodexho in an effort to rebrand the lowly catfish. For many, their pitch is a no-brainer; blue catfish is cheap (around $8.99 a pound), local, sustainable, and–despite a reputation for muddy flavor–tasty.

“Pan fry it, bake it, grill it, make tacos with it. There are so many ways to prepare it and people are endlessly surprised by how delicious it is,” says Gruber. Blue catfish is a mild, flaky fish, well-suited to an array of culinary applications, and an easy ingredient for chefs to incorporate into existing menus.

The Wide Net Project works with a local processor to buy, cut, and package the fish. The partnership allows the organization to act as a sort of sales and marketing agency for blue catfish, using existing infrastructure to deliver the fish to market. They hold tastings, network with chefs, and collaborate with regional supermarkets to raise public awareness of the ecosystem costs and culinary possibilities of the catfish.

Then for each pound of fish they sell, Wide Net donates a quarter-pound to a hunger relief organization working in the community.

So far the combination of altruism and environmentalism is working. Consumers, chefs, and institutional buyers alike are waking up to the bounty of sustainable seafood in their backyard and sales have begun to rise. In 2015, the co-founders expect to sell 75,000 pounds of fish to the region’s consumers and donate tens of thousands of pounds to food-insecure families.

Their effort is an unusual approach to a devastating biological threat and a glimmer of hope for the Chesapeake Bay in its war on the blue catfish.

“Across the board, biodiversity is being affected,” says Gruber. “If we can have a real, significant impact on that, it would be huge.”

Photos, from top: Giant catfish, Rocky and Bill Rice, the father-son team that catches for the Wide Net Project.