Superwheat Kernza Could Save Our Soil and Feed Us Well

The Kansas-based Land Institute gets ready to debut its first perennial food, with the help of bakers, chefs, and distillers. 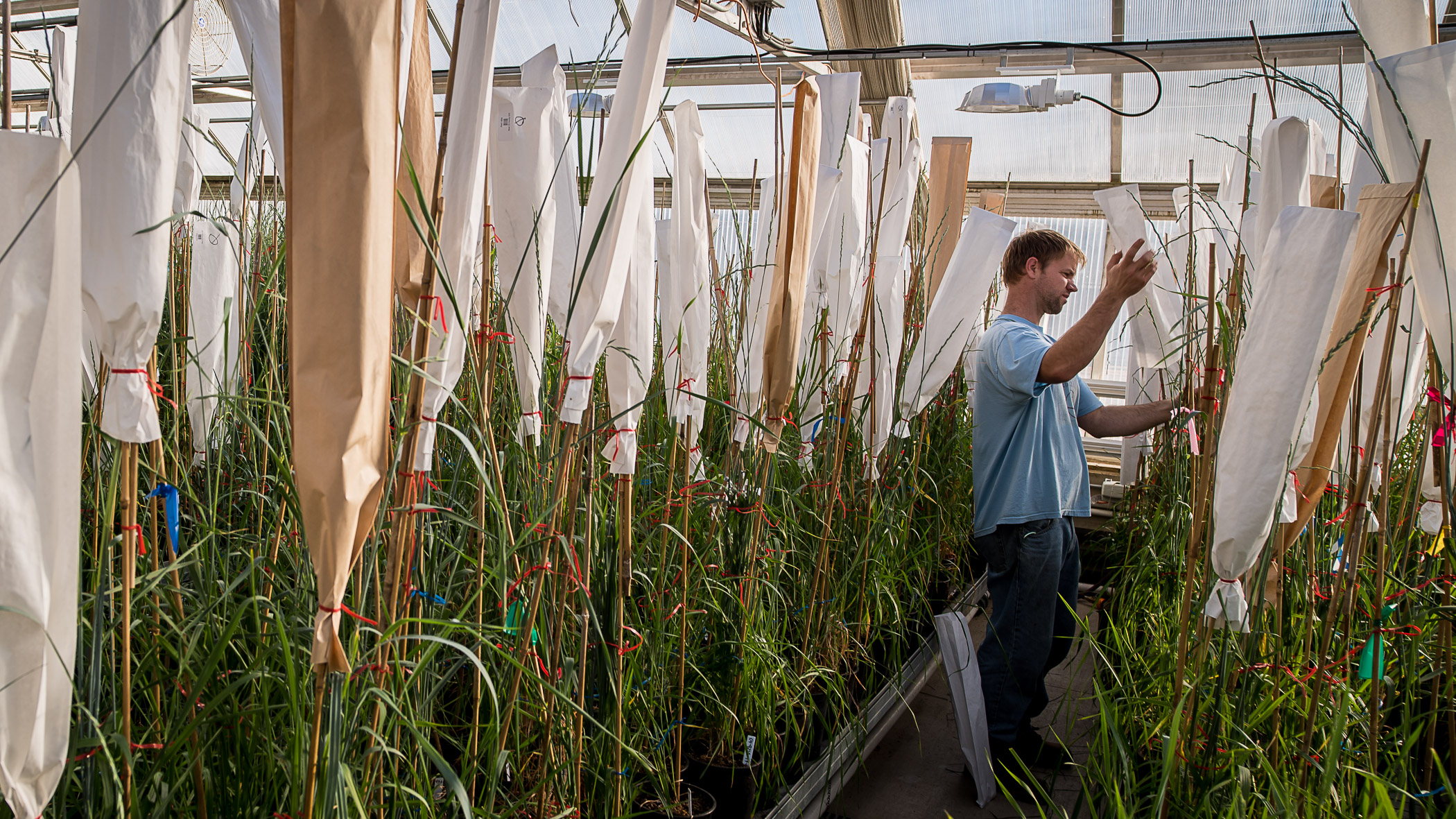 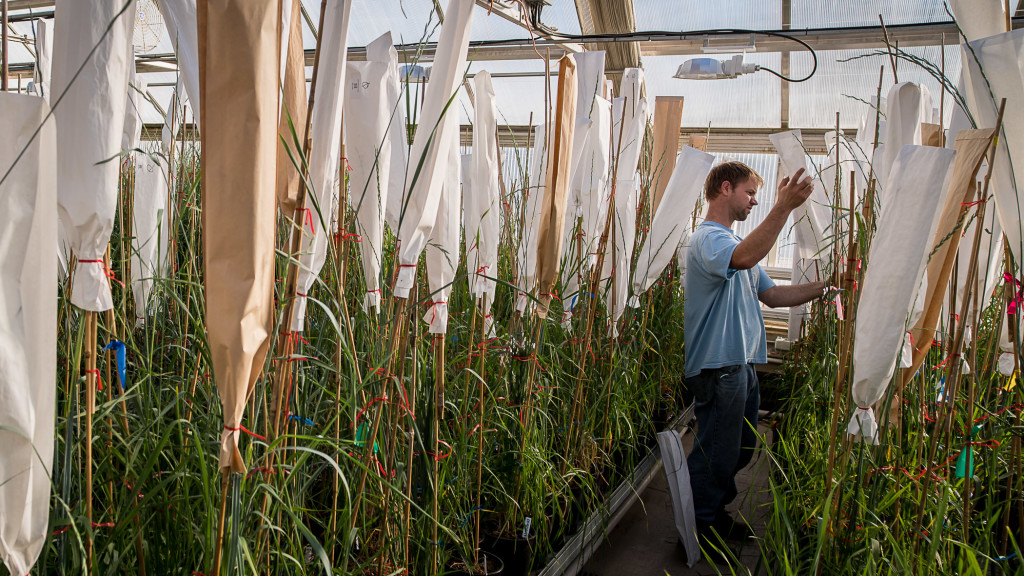 Kernza’s arrival has been a long time coming. The new grain variety from the Land Institute is derived from an ancient form of intermediate wheatgrass, a perennial that is actually a distant relative of wheat. And there’s a widespread team of researchers hoping their work will pave the way for an entirely new form of food.

In development for well over a decade, Kernza is now being grown in test plots around the world, and a host of scientists, food retailers, bakers, and distillers are collaborating to help bring it to consumers.

Kernza is perennial, meaning it can be grown year-round, with roots that live on in the ground through winter. Corn, wheat, and most of the other grains we eat, on the other hand, are annual crops, which must be replanted anew every year, and require seeds, fertilizers, and pesticides for each planting. But Kernza’s most important difference–and the reason so many people have been waiting for its arrival–is the way it interacts with the soil.

Because its root system is dense, growing down into the earth up to 10 feet, Kernza can respond to shifts in soil and temperature quickly, taking in water, nitrogen, and phosphorous. Annual wheat doesn’t live long enough to develop thick roots, and requires soil tilling before each planting. But Kernza’s roots hold soil in place, preventing erosion. This is especially crucial in the farm belt, where rain washes significant quantities of soil and dissolved nitrogen into waterways, and eventually to the Gulf of Mexico. The Environmental Working Group estimates that 10 million acres of Iowa farmland lost dangerous amounts of soil in 2007.

That’s not all. Kernza also “builds soil quality and takes CO2 out of the atmosphere, which may help with mitigating climate change,” says Land Institute scientist Lee DeHaan, the driving force behind Kernza.

DeHaan has about 20 test acres planted in Kansas, home of the Land Institute, but the grain performs best in areas with abundant moisture, so he also has it planted around the world. One hundred acres are planted at the University of Minnesota. A small university experiment is planted in Manitoba, along with a very small amount planted in Wisconsin. There’s also an acre at the Swedish University of Agricultural Sciences. In the near future, the Land Institute hopes to see thousands of acres of farmland planted with perennials. But first they must perfect the seed.

Co-founded in 1976 by Wes Jackson, the Land Institute has a single focus: to develop an agricultural system with the ecological stability of the prairie with a grain yield comparable to annual crops. Perennial grains, Jackson has long argued, will put an end to soil erosion, lessen our need for chemicals, restore soil health, curtail carbon emissions and provide the world with greater food security. In addition to Kernza, scientists at the Land Institute are working on perennial forms of sorghum and sunflowers. 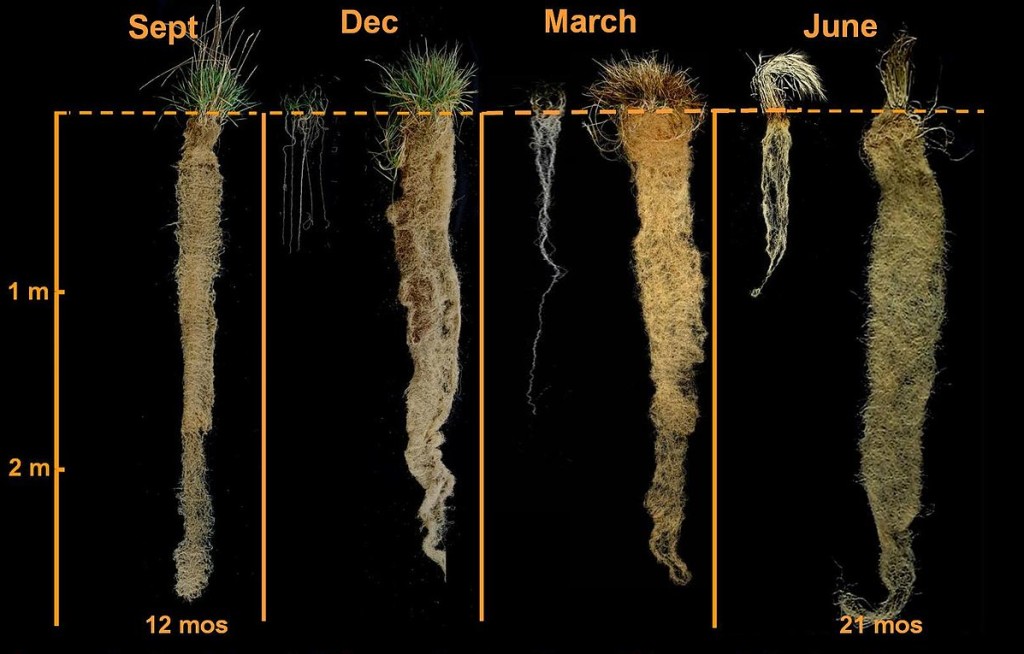 Grassy, with a Hint of Magnesium

At a recent talk DeHaan gave in New York, hosted by Experimental Cuisine Collective, a basket of hard, crumbly Kernza biscotti made its way around the room. The baker, who thought the grain went “big and flat and tasted really grassy,” had added orange zest and chocolate to mask its natural taste, making the cookie taste anything but natural. When baking or mixing the grain, DeHaan told the group, there’s a noticeable grassy flavor. Food scientists at the University of Minnesota say it’s an infrequent reaction, but the cause hasn’t been determined. Flavor, he tells us, will be the last thing he and other breeders work on.

In the meantime, however, DeHaan is doing his own version of crowdsourcing by asking a number of people to work with the grain and share feedback with his team. Some even have products coming to market soon.

Patagonia Provisions, the new culinary arm of the wilderness apparel company, has dibs on 90 of the acres of Kernza planted at the University of Minnesota. The company is tight-lipped on their work with the grain, but did share that they have several products in development using organic standards, which should be ready for sale in 2016.

Perennial, a San Francisco restaurant opening this summer, has plans to incorporate new sustainability practices like aquaponics, carbon farming, energy efficiency, and perennial agriculture into their culinary framework. Once the team gets their hands on a shipment of the Kernza grain, they plan to work with Chad Robertson from Tartine Bakery to test it for their bread program.

Minneapolis-based Birchwood cafe already has Kernza pancakes on their menu.

Zachary Golper, baker and owner of the bakery Bien Cuit in Brooklyn, made test batches of bread with 40 pounds of whole grain Kernza flour. While the protein content is higher–20g as opposed to 16g–its ratio of gliadin and gluten is very far off from wheat, making it difficult to apply standard recipes. Before jumping in all the way, the Land Institute recommended Golper add in some traditional wheat flour to make it bake properly.

Golper first made a plain hockey puck out of 100 percent Kernza. Then he let it ferment for over 24 hours in a warm environment, where it became extremely bitter. So Golper tried a basic method for low acidity, and started to get interesting results. “I could taste the grain in a way that I’m not sure anyone has. It speaks of an old grass flavor. But I found that there was this thing–sort of a metallic taste–I couldn’t eliminate.”

What Golper may taste is the subsoil in which the grain was grown. While wheat roots go down one meter, Kernza roots go down at least three meters. This means the grain may carry some flavor from the magnesium and calcium it has contact with deep in the earth. The baker was excited at his discovery. If it’s true, Kernza would be one of a number of grains with a form of terroir.

Beyond bread, Kernza is also appearing in whiskey. Ventura Spirits, a California-based spirit company known for using unique ingredients has picked up the grain for it’s dual value: taste and environmental impact. Henry Tarmy, one of the partners at Ventura Spirits, says the grain has a surprising bouquet–floral, light, and almost fruity–even straight off the still. “We started experimenting with it because it’s exciting to be part of a work in progress and in some small way we can help usher in commercial viability. But then we found out, well shit, this stuff is really delicious,” Tarmy says.

Working out the Kinks

Beyond getting the grain into peoples hands for feedback, there are other areas that are out of DeHaan’s realm of expertise, namely management questions, like how best to farm the land with a perennial grass. This track is being worked on by scientists at the USDA, Cornell, and Ohio State. Intermediate wheatgrass is DeHaan’s baby, but its rapid development is due to the popularity of the topic and the wide spectrum of universities, institutions, and other people getting involved.

DeHann and his team are still working on breeding Kernza for increased seed size, yield, and what’s called a “non-shattering hull.” Because it’s a wild grass, the seeds are naturally small, which means more bran and fiber, but lower yield overall. Shattering refers to the dropping of the seed to the ground as it matures; all wild plants do this. Domesticated grain crops, on the other hand, hang onto their seeds so they can be harvested.

While some modern wheat varieties have been bred to resist disease–like leaf and stem rot, DeHaan explains that over evolutionary time, the perennials have learned to live with disease and pests. Although some of his plants are susceptible to bacteria leaf streak, DeHaan says, Kernza “is phenomenally clean.”

While the breeder uses DNA sequencing to help get to the varieties and traits that matter, his team is not taking genes from other organisms.

All of the Land Institute’s major crops have benefited from a pretty long period of public research support, through public universities, state funding, and the USDA. “In fact, our major grain crops still have substantial public investment in genetic research, disease resistance, and even breeding programs for some,” DeHaan points out.

DeHaan has been working with Kernza for the past 13 years, and he has some plots he planted in 2003, his first year breeding the grain. When he started, he thought it might take 50 to 100 years to get a perennial grain into the food system. Ever the methodical scientist, he wrote in an email: “There are so many factors that can drive this.”

Now, he says, “I see the problem as less formidable than I previously did.” To bring “a species from wild with no commercial value to the early stages of commercialization,” he says it might be more like 20 to 25 years.