A Look Inside Group Sow Housing, the Pork Industry’s Alternative to Gestation Crates 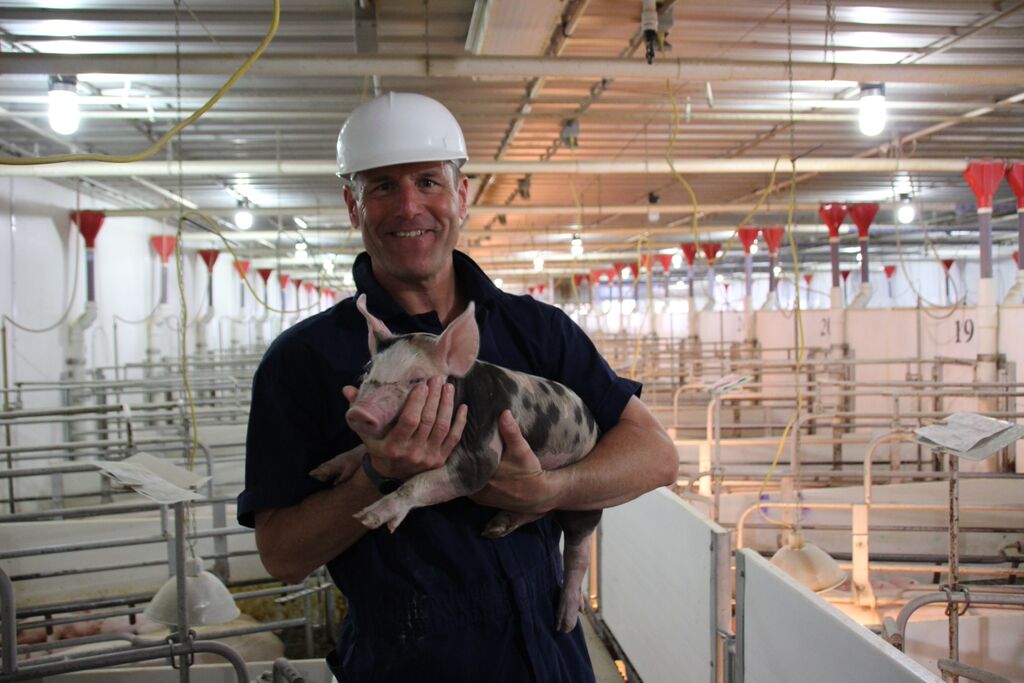 As animal welfare expert Temple Grandin has described it, pregnant pigs housed in gestation crates spend their days living in the equivalent of an airline seat for humans.

They spend their back-to-back 3-month pregnancies in a metal stall no wider than their bodies, unable to walk, turn around, or have physical contact with other pigs.

Most consumers know these gestation crates (called “gestation stalls” inside the industry) from grainy undercover videos taken by animal welfare activists. And we hear about them when large restaurant chains and retailers—most recently Walmart—make pledges to phase them out of their supply chains.

But what is replacing the crates? According to the National Pork Board, between 15 and 20 percent of the 5.9 million sows in the U.S. are already spending the majority of their pregnancies in some form of ”sow group housing.” In these systems, life for pigs is spent in the equivalent of an enclosed airplane, without the seats. There’s more space, and pigs can socialize with one another.

However, there’s still no straw bedding, no sunshine, and nothing to chew or play with. And the new systems don’t address issues of manure management, odor impacts on neighbors, or conditions in pig slaughterhouses.

“We need to be careful not to have the illusion that this type of agriculture is hunky dory now,” said Kendra Kimbirauskas, CEO of the Socially Responsible Agricultural Project and a producer of pastured hogs in Oregon. “When you look at only one piece of the puzzle, none of the other problems necessarily go away.”

In other words, group housing doesn’t make “a silk purse out of a sow’s ear,” as the old adage goes. But according to animal welfare advocates, it is making life a lot more bearable for millions of industrially-raised pigs.

Country View Family Farms’ sow facility an hour west of Harrisburg, Pennsylvania, in the town of Dry Run, is held up as an important example of group housing technology. There, pregnant pigs in groups of 70 stroll around spacious indoor pens where they nudge and sniff each other, occasionally poke each other awake, and eagerly saunter up to “electronic sow feeders” (or ESFs).

The ESFs are crucial components of this type of group housing, because (often violent) competition for food has been the main reason pork producers have felt the need to keep sows isolated. Individual electronic feeding stalls help minimize sow competition in the new open pens, and ensure that each sow gets the right amount of food.

I was recently given a tour of this 5,600-sow Country View facility to observe the process myself. The company’s ESF system relies on a transponder embedded in each sow’s ear, and feeding stations located in each group pen. The feeding stations are miniature versions of a horse’s starting gate at a racetrack: They’re narrow, with an electronic gate that opens on both ends.

When a sow wants to eat, she walks into the back of the station, and a door locks behind her, keeping others out. A computer in the station scans her ear tag, and if she hasn’t eaten yet that day, an automated lever drops a set quantity of corn- and soy-based feed into a bowl. If she’s already eaten, she gets no feed. 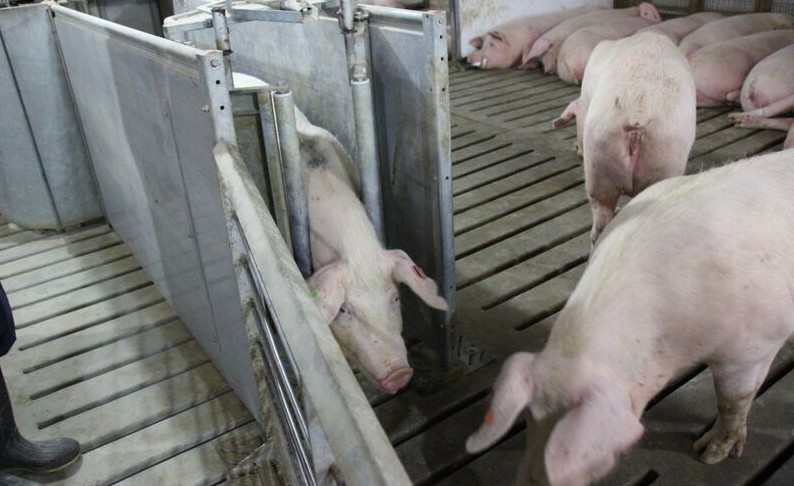 Most sows take 5 minutes to eat and then walk out, at which point the locked door at the back opens for the next sow. At a young age, sows are trained in how the system works, and they generally master it in a week.

Electronic systems like this portion out food based on a sow’s current body condition. If a sow doesn’t go into the feeding station at all, a worker is sent to the pen to inspect her for problems. For this reason and others, people who work in group housing systems need more training in pig behavior than those working in traditional stall systems.

Of the 57,000 sows under Country View’s care, 50 percent currently spend their pregnancies in living groups, and the company has pledged that its entire pork supply—from farms it both owns and contracts with—will be gestation-crate free by 2022.

“If we can give the same, or better, animal care and let the animal move around,” said Bob Ruth, president of Country View, “why the heck wouldn’t we?”

Ruth and his team believe that 70 sows in a pen, with 20 square feet per sow, is ideal; at this number, the pigs seem to establish their social ranking with minimal aggression. Indeed, during my tour I saw sows existing very calmly together, though I could imagine a less harmonious situation if a pile of feed were simply dropped in the pen (an approach used by some pork companies that have eliminated gestation crates; others feed sows in traditional stationary stalls that the pigs can freely walk in and out of).

Currently there is no standard group housing method being used in America; producers are experimenting with various pen configurations, feeding systems, and grouping strategies to find the model that works for them. ESF is still somewhat rare, according to the National Pork Board, mainly because it requires complex computer technology and is more expensive to implement. But Ruth says the transition has been “cost-neutral” for Country View because the precise electronic feeders are keeping the company from wasting feed.

Ruth says group sow housing “is a real flashpoint right now in the pig business. You have some folks in the Midwest who are staunchly saying, ‘Not going to do it, never going to do it.’ So it’ll be interesting.”

According to both animal welfare activists and the pork industry, Country View is a leader in sow housing research and implementation. The company is owned by the Clemens Food Group, which sells a variety of products under the Hatfield brand. One industry magazine recently ranked Country View 13th on its annual list of “pork powerhouses.”

Ruth was exploring group housing for sows back in 2002, a number of years before animal welfare groups stepped up their activism against gestation crates and before a 2009 undercover video by Mercy for Animals brought Country View’s sow crates into public view. He and other Country View executives have made numerous trips to northern Europe, where new alternative sow systems are being pioneered and fine-tuned.

In 2004, the company was the first in the U.S. to establish an electronic sow feeding (ESF) system. And Country View may be getting ahead of the curve again next year, when it tries out new farrowing crates from Denmark that give mother pigs more room to move while nursing their young.

The company will also be experimenting with giving outdoor access to 5,000 of its sows (though the pigs will be on solid flooring in open-air “sun porches,” as Ruth calls them; they won’t be on pasture or dirt).

“[Is Country View] perfect? Of course not,” says Josh Balk, senior director of food policy at the Humane Society of the United States. “But they are the leader among large corporations within the country. They consider pigs to be sentient beings.” 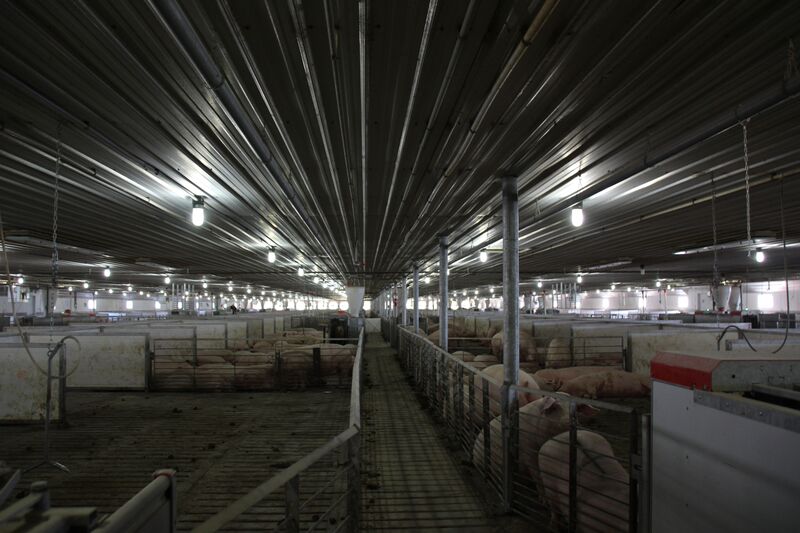 Photos from top: Bob Ruth poses with a piglet; a sow emerges from an Electronic Feeding System; the 5,600-sow Country View facility in Pennsylvania. All photos by Caroline Abels.