Some farmers are finding that not all grazing is the same. 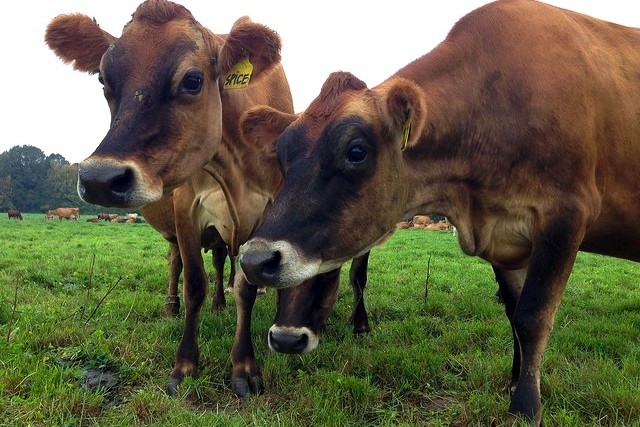 Jon Bansen has been working on a dairy farm in Monmouth, Oregon alongside his father for nearly 30 years. When the farm switched to organic about 16 years ago, he started to pay more attention to their 650 acres of grass and forageland. Grazing has long been central to organic dairies, and since 2010 the U.S. Department of Agriculture (USDA) has required that organic dairy cows spend at least 120 days out of the year eating grass on pasture, rather than grain-based feed.

As the years went by, Bansen and his father noticed something: All grazing wasn’t the same. When they rotated their 200 cows between field segments, and kept them there for a day at a time, the effect was very different than when they let the herd graze around the land at random. And when they did the former, both the cows and pasture seemed healthier and more robust. They also also noticed that the grass was retaining more water and they were turning on their irrigation later in the spring and fall, resulting in a savings of a month to a month-and-a-half of irrigation water a year.

Now the cows are on a 34-day rotation. The Bansens have broken the pasture into 1.5-acre plots, and they let the cows graze on each one for around 12 hours, allowing the cows to eat the grass part of the way down before they are moved on to the next parcel. Then, each parcel of pasture has more than a month to regenerate and build up healthy soil–which is good for their farm and the environment.

Bansen has become as much a soil farmer as he is a dairyman. Healthy soil is full of organic matter that forms when animals eat the top of a stalk of grass above-ground and the plant sloughs off its roots beneath. This continuous compression of decaying plant matter eventually creates what soil agronomist Mark Kopecky likens to a sponge–a dense, nutrient-rich soil ecosystem that traps rainfall before it runs off, and which could be a boon to California dairy farmers struggling during the current drought.

Managed grazing may seem like a basic technique, and it is–just not necessarily one humans have done intentionally, says Kopecky. Shuffling cattle between  pasture segments emulates how bison used to graze the prairie: eating the grass they wanted at one spot, fertilizing it in the process, then moving along to somewhere else and giving the grass time to regenerate.

When the pasture has more time to bounce back, the grass the animals eat is more nutritious and varied, which in turn makes them healthier.

“We’ve adapted modern agriculture to a system that’s been in place for thousands of years and we just didn’t take advantage of it,” Kopecky says.

He works for Organic Valley, the dairy co-op that Bansen and Bordessa also belong to, which preaches good pasture management to its roughly 1,800 members  for a  reason beyond good land stewardship: It might be a valuable way to mitigate climate change. Though few scientific studies have been done specifically on pasture management, rangeland is known to have tremendous potential to store carbon from the atmosphere and helps reduce greenhouse gases, according to a 2014 study by the Nicholas Institute.

Moreover, a 2003 study from the USDA found that soil with high carbon levels was likely to have better moisture retention. And Northern California’s Marin Carbon Project is helping ranchers work with scientists to learn more.

So if pasture management can save money, make farms more resilient to drought, lead to healthier animals, and help counteract the effects of global warming, why isn’t every dairy farmer in the world doing it? The key is in the word “management”–rotational grazing takes a lot of thought and effort. It’s not just a system you set up once; a farmer has to watch the weather, watch his or her pasture growth, and make judgment calls and adjustments every day. It also involves more physical work: stringing fences across the rangeland to segment the pasture, moving cattle at least twice a day.

“[It’s] my full time job,” says Bansen, with a chuckle. But since his farm’s switch to organic, Bansen says that they have improved the organic matter in their soil by 2 percent. That might sound insignificant, but most soil only holds around 5 to 6 percent organic matter at the most.

“When the soils are healthy and the cow is healthy, then the food is healthy,” he adds. “It’s one big old circle that’s really good when it works well.”