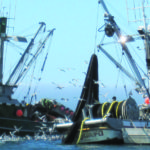 As a food and lifestyle writer and someone who works in the seafood industry, I’ve long encouraged people to eat the little fish, particularly sardines, herring, anchovies and other small “forage” fish that are plentiful and local to California.

This summer, the Pacific Fishery Management Council closed West Coast sardine fishing due to very low sardine numbers. In fact, since 2007 there has been a 91 percent decline documented by federal scientists.

Forage fish have natural boom and bust cycles, but the sardines off the coast of California have been steadily decreasing in number. They are a critical part of the ocean food web, and their absence is speculated to be the reason for the hundreds of sea lion pups that have been washing up on California shores dead or dehydrated. Brown pelican populations in California are also suffering from their absence.

It can’t be said with certainty that sardines are being overfished. Sardines, like other forage fish have a natural boom-and-bust cycle and are very sensitive to climate changes and weather patterns. But of course, fishing during a steep population decline, like the US West Coast has done since 2007, certainly doesn’t help. These schools also pass along the coasts of Mexico and Canada, and there is not an international agreement on their management, so even if we don’t overfish them, another country may.

Right now, the West Coast sardine population is in peril, but not because people eat them, but because they don’t. West Coast sardines have not been landing on our plates, but rather they are primarily being fed to larger fish as bait through the commercial fishing industry and on fish farms. Tuna farms in Baja and Australia and have proliferated over the last 10 years and it takes an astonishing 20 pounds of sardines to produce 1 pound of tuna. According to the Lenfest Forage Fish Task Force, 90 percent of forage fish are used for agriculture, fish farms, and nutritional supplements. So here’s the solution: Bypass fish like farmed salmon and ranched tuna that eat forage fish (often in the form of fishmeal) and instead eat these little fish yourself. 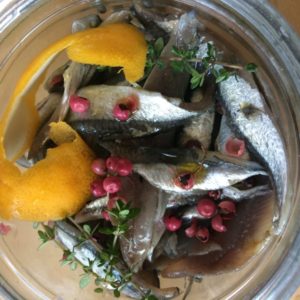 Getting Americans, even in the foodie hot bed of California, to eat these fish has not been an easy sell. Small fish spoil quickly, so they are hard to find at a fish counter. They require more preparation than large fish, and you have to learn to live with bones. They also have a bad rap. A salty canned anchovy or limp sardine that long sat at the grocery store imprints on people’s minds. I work for a Community Supported Fishery in Moss Landing, Real Good Fish, and while some of our members love the little fish, many opt out of them. Still, we work to convince them that fresh sardines or anchovies from the Monterey Bay or herring plucked straight from the San Francisco Bay are amazing.

My next-door neighbor, Tom was one such skeptic. I made a batch of fresh anchovies sautéed in olive oil and garlic. I told him they were “baby halibut” and he loved them. (Okay, a little mislabeling on my part, but it was for the greater good.) When I fessed up, he claimed, “I’ve never had an anchovy like that.”

Anchovies, herring and sardines are some of the healthiest food you can eat. Sardines are omega-3 powerhouses and one of the only foods available that contain coenzyme Q10, which is great for warding off cardiovascular disease. They have lots of vitamin D that helps prevent certain cancers, their B12 helps support strong bones, and they are packed with protein. Because sardines are low on the food chain, they have virtually no contaminants, like mercury.

If we eat these fish instead of using them as commercial fishing bait or as food on industrial farms, we can all have healthier diets for less money. As well, we can pay the fishermen more to take fewer fish out of the ocean, and we will consider small fish a valuable resource and protect them in the future. But for now, the brown pelicans and sea lions need them more than we do.