The state could be the fifth in the nation to pass an ag-gag bill. 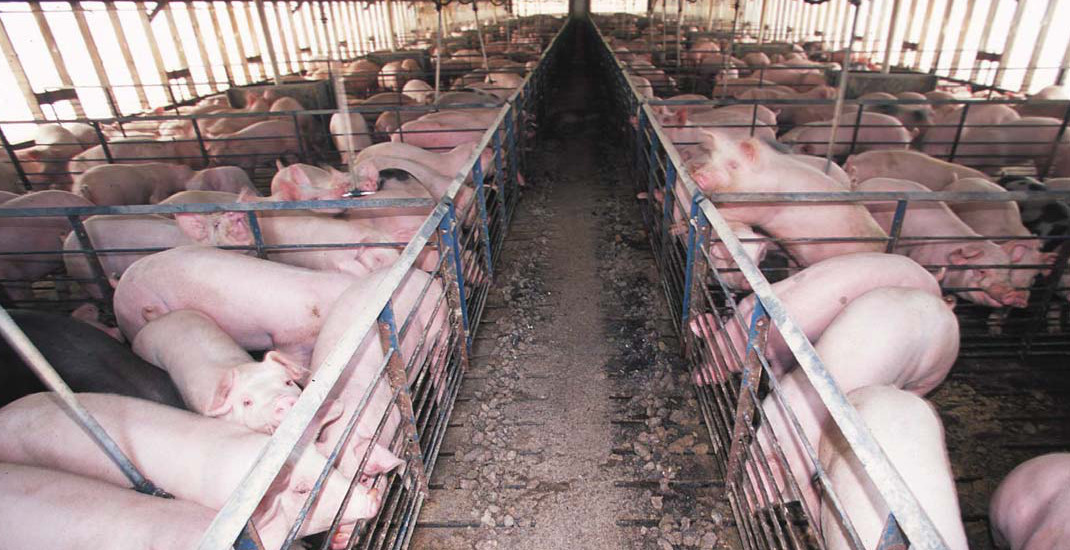 Editor’s Note: North Carolina Governor Pat McCrory vetoed this bill, saying: “While I support the purpose of this bill, I believe it does not adequately protect or give clear guidance to honest employees who uncover criminal activity.” Then, on June 3rd, the State Senate and House both voted to override the veto.


Last week, the North Carolina senate approved a bill with a relatively unassuming name—the Property Protection Act. If the bill becomes a law, however, the state’s large animal farms, and a number of other businesses, will benefit from a new level of legal protection against workers looking to shed light on animal abuse or criminal activity.

House Bill 405 seeks to “protect property owners from damages resulting from individuals acting in excess of the scope of permissible access and conduct granted to them.” The “ag-gag” bill would make it illegal for employees to enter any unauthorized spaces or to place an unattended camera electronic surveillance device on the property. It would also make it illegal to apply for a job with the intent to expose animal abuse, environmental harms or food safety issues on farms, or for any reason other than a “bona fide intent of seeking or holding employment.”

Like many recent ag-gag laws proposed around the country, the bill would put an end to undercover investigations on industrial farms. But it goes further than most. In fact, the North Carolina bill doesn’t limit itself to agriculture. H.B. 405 wouls allow any employer to sue anyone who makes audio or video recordings, take photographs or removes data or other material from any area that is not open to the public. It also entitles employers who win a case to collect damages, as well as $5,000 for every day that the law was violated.

In a state with over 52,000 farms, and the second highest rate of pork production next to Iowa, it’s clear that the bill could have a chilling effect on the watchdogs of North Carolina’s agriculture industry. Earlier this month, Compassion Over Killing released a video shot undercover in a large poultry operation there, which received media attention for the harsh conditions it depicted, and would have been illegal under the proposed law.

Backers of the bill include the North Carolina Chamber of Commerce, whose members include Tyson, Smithfield Foods, Pilgrim’s, Cargill, and a number of other big agricultural interests.

Currently on Governor Pat McCrory’s desk, the law will automatically pass into law if he does not veto it by May 30th. If it passes, H.B. 405 will make North Carolina the fifth state to make reporting a crime, joining Idaho, Iowa, North Dakota, Wyoming, Montana, Utah, Washington, and Missouri. Each state has a subtly different law: some put the emphasis on making photography and video of animal abuse illegal. Others–like Montana and Wyoming–include language that requires you to turn over any evidence of illegal activity to the authorities immediately, sometimes within 24 hours. In Iowa, if you hide your animal welfare allegiances on a job application, the employer can press charges that could send you to jail.

The first laws like this appeared in the ‘90s with Montana, North Dakota, and Kansas enacting the earliest forms to prevent activists breaking into labs, but not yet the stranglehold on reporting we have today. They didn’t crop up again until 2012, when 11 states put them on the floor–including Vermont, North Carolina, Pennsylvania, and California–all under the guise of animal and ecological terrorism, using similar language drafted by the American Legislative Exchange Council (ALEC), a conservative group with funding from Exxon, the Charles G. Koch Charitable Foundation, and the pharmaceutical industry. Those bills were defeated. In 2014, New Hampshire, Indiana, Idaho, Arizona, Tennessee, Kentucky, and North Carolina introduced bills, and all were defeated, except Idaho. In total, 17 states have now defeated proposed ag-gag legislation.

All this might explain why North Carolina lawmakers, and the agriculture industry lobbyists they represent, have broadened their approach with this bill.

As Paul Shapiro, Vice President of Farm Animal Protection at the Humane Society of the United States (HSUS), pointed out in recent op-ed in the National Review, “Ag-gag bills have become a public-relations nightmare for animal agriculture.” In 2013 the New York Times editorial board came out strongly against the bills, as has the Los Angeles Times, and a number of other newspapers around the nation. Shapiro quotes the National Pork Producers Council as saying: “We did a study of coverage of ‘ag-gag’ laws that found that 99 percent of the stories about it were negative.”

Matthew Dominguez, Public Policy Director of Farm Animal Protection at HSUS, says years of bad press led the industry to think creatively about expanding the terms of the legislation. “The ag folks know that if they only give themselves this protection from being exposed, it further proves they have something to hide. So, in recent years, they’ve intentionally expanded the reach very broadly to cover all business to cover their tracks,” he told Civil Eats. Even Smithfield Foods, the nation’s largest pork producer, now owned by a Chinese company, “has told HSUS that they do not support ag-gag laws,” Dominguez added.

Many of North Carolina’s contract livestock farmers have come out to publicly support the bill. Their names and comments appear on the Facebook page for the North Carolina Farm Families, a group that lists the state’s Farm Bureau and the North Carolina Pork Council as supporters, among others. Their petition reads: “I appreciate the many contributions local pork farmers make to the well-being of our communities by providing economic stability and jobs in rural parts of the state. We trust local pork farmers to protect the environment and care for their animals.”

Genell Pridgen, a consultant for the Socially Responsible Agricultural Project, and a tenth-generation farmer at Rainbow Meadow Farms in North Carolina, told Civil Eats that the launch of the Facebook page coincided with a rally for environmental and racial justice in Raleigh sponsored by Waterkeeper Alliance, and the debate over H.B. 405 in the legislature.

Advocates like Pridgen appear to have the numbers on their side. According to an independent poll run by the American Society for the Prevention of Cruelty to Animals (ASPCA), whose “Open The Barns” campaign promotes transparency in farming, 74 percent of North Carolina voters support undercover investigations by animal welfare groups on farms. And by a margin of nearly 3 to 1, they also oppose legislation that would prevent undercover investigations. Despite these strong numbers, the advocacy groups are concerned for the fate of the bill and mounted campaigns urging Governor McCrory to veto the bill.

“There’s a growing awareness that over the last 50 years, while no one was watching, things have spun out of control on industrial farms. It’s also clear that the only way out of this mess is to see with our own eyes what is going on behind these closed doors,” said Daisy Freund, Senior Manager of Farm Animal Welfare at the ASPCA.

Some sustainable farmers have also come out against H.B. 405. The Carolina Farm Stewardship Association delivered a letter signed by 40 North Carolina farmers–including Genell Pridgen–asking the Governor to veto the bill. It reads:

By permitting severe repercussions against those who report on illegal activity on farms, H.B. 405 grants a free pass to those recklessly cutting corners, and as such, directly threatens our economic viability as responsible farmers and food producers … The bill makes it looks like every business in the state wants to coerce its employees into keeping quiet.

Craig Watts, a long-time North Carolina resident and Perdue contract farmer, who allowed the conditions on his farm to be filmed in a late 2014 video by Compassion in World Farming, has also come out against the bill. In a letter to the editor of the Raleigh-based News and Observer, Watts described the plight of the modern day chicken farmer: “The race to the bottom for the cheapest chicken has forced me and my peers to cut corners, live in economic uncertainly, trade good animal welfare for faster chicken growth, and externalize costs on to taxpayers.”

While North Carolina farmers and advocates watch H.B. 405 from the edge of their seats, lawmakers in Wisconsin are considering a similar bill. According to the Wisconsin State Journal, the bill is “expected to force anyone with video or photographic evidence of animal abuse to take it almost immediately to police.”

In the meantime, Matt Rice, the Director of Investigations for activist group Mercy For Animals, sees a silver lining. As he sees it, “ag-gag bills have generated much more mainstream media attention to the plights of farmed animals than ever before.”

Governor McCrory’s office did not respond to multiple requests for comment.