How a weekly after-school class offered by the city’s Park District is bringing cooking and health education to under-served neighborhoods. 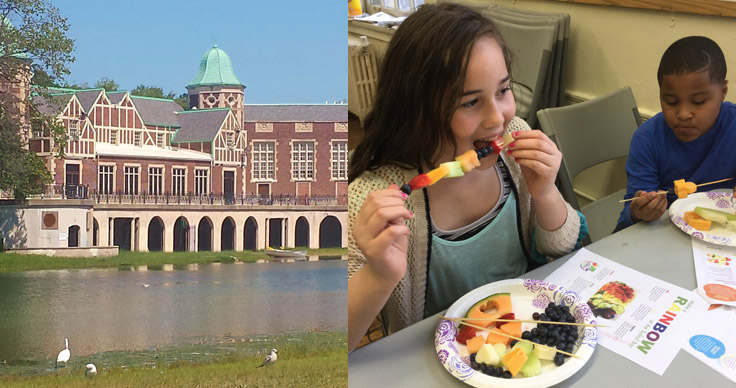 In early May, a group of children lined up along tables to press small cookie cutter shapes into blocks of cheese. Next, they were given skewers and fruit and asked to design their own shish kebabs.

Teacher Kinga Kelly extolled the virtues of eating colorful foods–like bright red strawberries and deep purple blueberries–to the group. “What is the benefit of eating the rainbow?” she called out. “We get nutrients,” they called back. “Iron! Vitamin C for your immune system! Vitamin E for your skin! Vitamin A! Vitamin D for your bones!” Meanwhile, the thud of dribbled basketballs echoed from a gymnasium down the hall.

The kebabs disappeared in a few bites and for some of the children it was the first time they’d tasted cantaloupe or honeydew melon. Signs on the wall declare: “No Junk Food in the Classroom.”

Fun With Food, a weekly after-school class offered by the Chicago Park District (CPD), is bringing cooking and health education to under-served neighborhoods, and it’s helping the Park District find new uses for its hundreds of former fieldhouses. Many were warming facilities used in winter and others have held events and activities throughout the years. 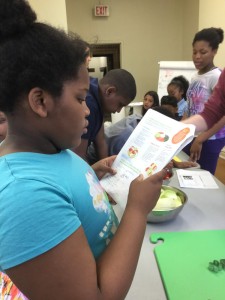 Back in 2009, the district began retrofitting some of the buildings–like the 100-year-old Broadway Armory Park, once a National Guard training center—with large kitchens so they could begin teaching healthy cooking classes to young people in disadvantaged neighborhoods. Not all have kitchens, so the educators adapt with recipes that can be prepared cold.

Now, the program is rapidly expanding. This summer, many of the 11 current locations will partner with nearby urban farms such as the city’s successful Growing Power, as well as several school and community gardens.

Colleen Lammel-Harmon, wellness director for the CPD, created the sustainability program and classes that run in size from 15 to 30 students ages six to 12. Kelly taught her recent shish kebab class at the Humbolt Park field house, located on the city’s west side where childhood obesity and gang rivalry persist.

While some children sign up as part of overall after-school programming with the park district, many parents enrolled their children to combat picky eating or instill smart food choices at an early age.

Alka Tyagi signed up her son Ravi, 5, because he was becoming too choosey about what he’d eat. The class, she said, has introduced Ravi to vegetables and fruits he wouldn’t try at home.

Jerald Avila, 12, said his favorite recipe so far was, “a really good smoothie” made with yogurt and bananas. Six-year-old Jaden Diaz said he learned that “strawberries made into stars with the cutter are very good.”

Kelly, the program director who also penned the Fun With Food Cookbook, teaches the students to make dishes like Apple Nachos Supreme, a combination of apples, yogurt, raisins, honey, and pecans and Creamy Avocado Toasts (a favorite). The cookbook also includes recipes for Meaty Veggie Roll-Ups and Peaches & Cream Parfait. 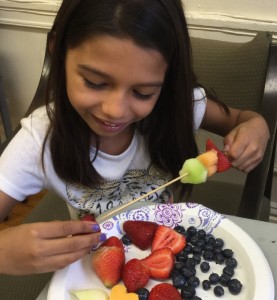 on, and how to dry herbs. The curriculum is based on the U.S. dietary recommendations, which specify that at least half our plate should be filled with fruits and vegetables.

After one or two classes, Kelly said the children begin to talk about what they’ve brought for lunch, with an immediate focus on including more fruits and vegetables. “If they have grapes, they will pull them out and call out ‘look what I have!’” she said. Others start to participate in dinner and lunch preparation at home.

Lammel-Harmon said her plans include continued partnerships with city growers, with the children perhaps visiting the farms and gardens and harvesting their own herbs and vegetables. She has shared the class recipes with the staff at Growing Power’s three-acre farm so that they can grow specific herbs and vegetables for the classes. Chefs from the city’s Washbourn Culinary School have also assisted students and the parks department will soon be incorporating more culinary colleges and universities into the Fun With Food program.

Combining cooking with local growers will also help the students connect where their food comes from as well as soil knowledge and the importance of organics. Produce is donated by local grocers.

Abigail Vences, who has two children in park district classes, said they both now want to help her in the kitchen. She enrolled them in hopes that by sitting on the sidelines she too could learn how to make healthier snacks.

“They are not only trying different and healthy foods, they are watching what I have in the house,” Vences said. “If they see juice, they tell me that we can’t drink it because it has lots of sugar. The tortilla chips, too much salt.”