All the News That’s Fit to Eat: Dairy Farms Settle Over Manure, Federal GMO-Free Certification, and News on Salmonella 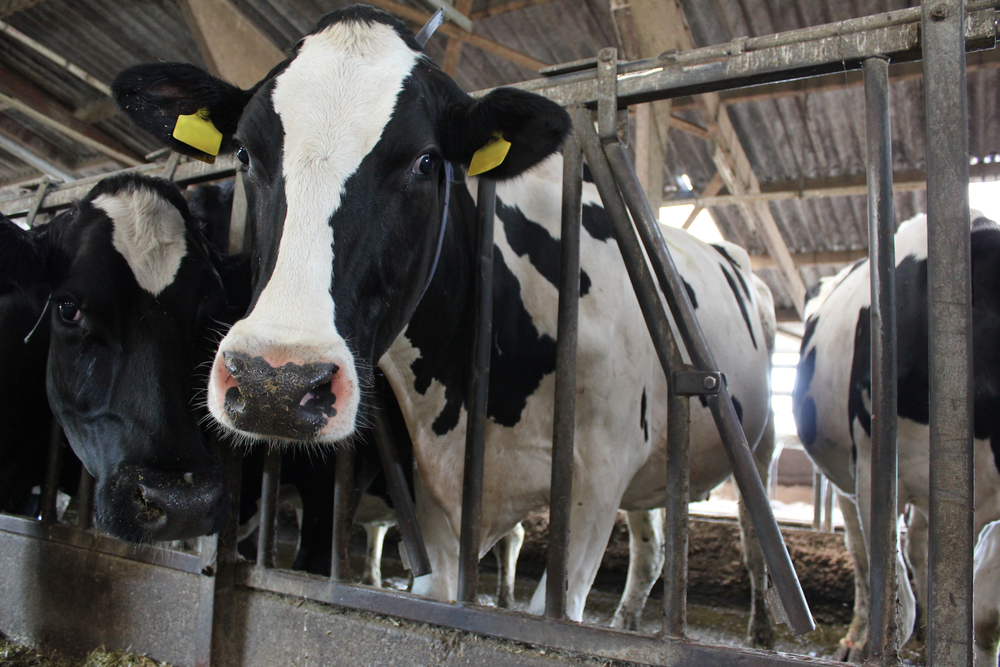 An average dairy operation produces about 80 pounds of manure a day, per cow. On a moderate scale, this pile of poop can provide farmers with valuable nutrients to fertilize their pastures. But on a factory scale, this waste gets collected in large containment pools or “poo lagoons.” From there, it can seep into the soil, leak into waterways, and eventually end up in drinking water.

This was the case in Washington State’s Yakima Valley, where three polluting dairy operations reached a settlement this week after a series of lawsuits by environmental groups like Community Association for Restoration of the Environment (CARE) and Center for Food Safety. In the terms of the settlement, the dairies must now take steps to ensure that valley residents have safe water to drink, by doing things like double-lining their manure lagoons and providing neighbors with bottled water or reverse-osmosis filters. (Public Justice has more on the specific terms.)

There was no monetary penalty, but it’s still an important settlement for the dairy industry and environmental groups at large. It followed a January lawsuit against one of the dairies in question, the Cow Palace, in which a federal judge ruled that the dairy posed an “imminent and substantial endangerment” to public health and the environment because of its manure mismanagement. That ruling was the first that classified manure as solid waste rather than a boon to farmers–and it will likely have ripple effects across the country.

The lawsuits, and settlement, comes at a time when the dairy industry’s larger impact on health and the environment has been in the spotlight. Global dairy consumption is expected to grow by 50 percent between 2005 and 2050, which means a lot more cows and all of their negative byproducts, from manure to methane gas. Labor issues are also a growing concern: We reported on Monday on a new campaign to secure dignified conditions and livable wages for dairy workers in Vermont.

The U.S. Department of Agriculture (USDA) has developed a new certification for foods that are free of genetically modified ingredients. Like “humanely raised” or “no antibiotics” labels on some products, the GMO-free label would not be mandatory and food companies would have to pay for it. The upside is that it would come with the verification of the USDA and thus have more weight than private GMO-free labels. The guidelines for certification have not been released to the public.

U.S. Bill Would Ban Antibiotic-Resistant Strains of Salmonella (The Oregonian)

Salmonella is a nasty bacteria that causes an estimated 1.2 million illnesses and costs the country nearly $4 billion annually. Reps. Rosa DeLauro (D-Conn.) and Louise Slaughter (D-N.Y.) have reintroduced a bill that would trigger a recall of any meat, poultry, and processed eggs contaminated with antibiotic-resistant bacteria or involved in a serious outbreak–something that the USDA is currently not legally authorized to do. The bill would also include Campylobacter, a bacteria that costs the U.S. about $2 billion a year.

Still, some good news: The overall risk of contracting a foodborne illness Salmonella or E. Coli went down in 2014, according to data released by the Centers for Disease Control (CDC) on Thursday. Unfortunately, the risk of getting sick from other bacteria, like Campylobacter, is on the rise, and total incidents of foodborne illness were about the same in 2014 as in the baseline, 2006-2008.

You’ve probably already encountered Bisphenol A (BPA) several times today without knowing it; the toxic chemical is found in water bottles, electronic equipment, automobiles, paper receipts, and in the epoxy resin coating the inside of aluminium cans. Following a review of new research, a California panel of scientific experts has added BPA to its list of chemicals known to cause reproductive harm (a list mandated by the state’s Proposition 65). This means that there will be a warning on all products that contain BPA.

Where Are All the Bees? (US News & World Report)

An annual survey has found that an average of 42.1 percent of honeybee colonies have died since April 2014. It’s the second-highest loss rate in nine years, made even more worrisome because the bees have been dying at higher rates in the summer, which is unusual. The authors of the survey blame mites, poor nutrition, and pesticides. A resident beekeeper on the staff of pesticide manufacturer Bayer told the Associated Press that the loss number is “not unusual at all.” Last month, we covered some of the initiatives California is taking to stop honeybee attrition.

Massive seed and pesticide manufacturer Monstanto is trying to buy its rival, Swiss pesticide and seed giant Syngenta. On Friday, the European company rejected a $45 billion dollar takeover offer from Monsanto, but that doesn’t mean that the deal is off the table. Tom Philpott points out that Syngenta’s share price had risen by about 20 percent following the offer, an indication that investors may support the takeover, and the company is holding out for more. However, Monsanto may also have to win over public opinion before the deal gets done.

Start scanning the skies for RMAX, the helicopter-like drone that the Federal Aviation Administration (FAA) has authorized to spray crops with pesticides and fertilizers. These 204-pounds drones are thought to be best suited for places that are tricky to spray from the ground or a small plane, like vineyards tucked into hills. RMAX was developed by Yamaha and has already been used by Japanese rice farmers.

A few weeks back, news broke that Nestlé was bottling water from bone-dry California, often without a current permit. Then Starbucks was forced to move its bottled water production out of the state. Now it seems that Walmart is sourcing its bottled water from Sacramento’s municipal water supply. Sacramento’s CBS13 led the investigation, which has led to public outcry and an online petition asking the company to “stop bottling the little water California has left before it’s too late.”

The Organic Trade Association this week petitioned the USDA to begin working on a check-off program, which would create public-facing industry-wide marketing campaigns much likelike “Got Milk?” or “Beef. It’s what’s for dinner.” Such a program could raise a potential $30 million, collecting fees from certified organic farmers who generate sales of more than $250,000; anyone who made less could participate voluntarily. The other goal is also to help more farmers transition to organic to meet the growing consumer demand. But some farmers and advocates worry about further centralization of power within the industry.  Even if all goes perfectly according to plan, it will take more than a year before the program is approved, and likely longer before we see the organic industry’s answer to the legendary Aaron Burr milk ad.

40 Years of a Changing American Diet, in One Massive Chart (Vox)

Why doesn’t anyone like grapefruits anymore, who knew that lima beans were popular, and what was up with dried pears in the ’70s? These are just a few of the many questions raised by Vox’s cool chart that shows trends in USDA food consumption data from 1972 to 2012. The most cringe-worthy trend the chart makes visible? The rise of high-fructose corn syrup consumption by nearly 4,000 percent in those 40 years.