The Color of Food: A Communal Vision for the Younger Generation | Civil Eats

The Color of Food: A Communal Vision for the Younger Generation 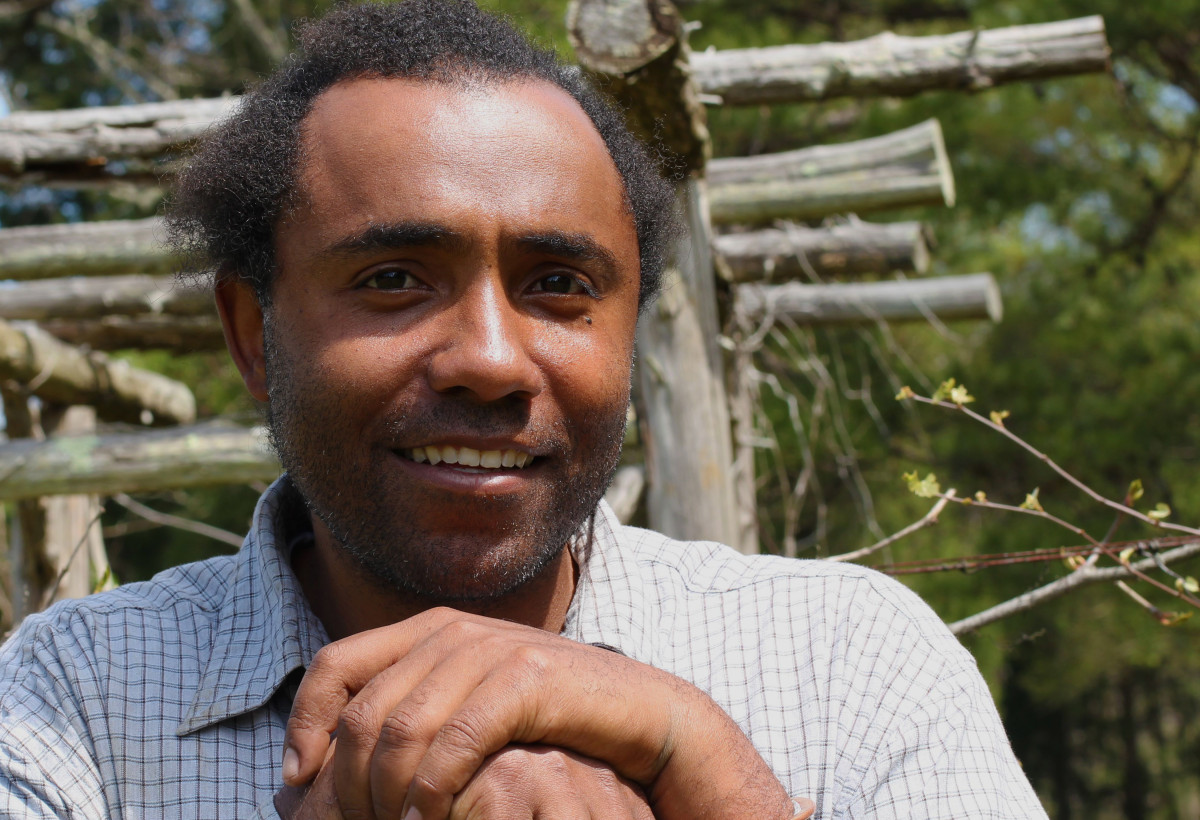 This is the third in a series of four excerpts from The Color of Food: Stories of Race, Resilience, and Farming. Read more about the book and the author here, then check out the first and second posts.

When I visited North Carolina, I heard a lot about Tahz Walker and Cristina Rivera-Chapman of Tierra Negra Farms, who are well known among young food-movement activists and urban gardeners in New York City. So as I pull up the long driveway to the land they are renting outside of Durham, I am excited to finally meet them.

The pair welcomes me into their home, and we talk like old friends over a dinner of lentils and kale and then well into the night.

Tahz’s family is from the Black Belt of Kentucky; his grandparents had a farm there, and his great grandparents were sharecroppers. His genealogy research about the agricultural legacy in his family, as well as his affinity for nature and desire to save money by growing his own food, led him to farming. Christina stumbled into farming at the age of 22, when she was empowered by a part-time job working on a family farm to pay back college loans.

They are both educators as well as farmers, teaching workshops ranging from sustainable farming to revolutionizing the food system, and Christina works with youth at SWARM (Students Working for an Agricultural Revolutionary Movement), a non-profit based in Goldsboro, North Carolina.

The pair is interested in ways of working with youth to figure out a partnership that creates a job cooperative of sorts to identify paying gigs. However, their own obstacles as young, landless farmers of color have put them into a perpetual cycle of transition and struggle. The segment below is excerpted from an interview with the couple.

Tahz Walker: We started Tierra Negra Farms in Mebane in 2009. We wanted really to try on our own, not as a non-profit organization, to form a model of community food sovereignty, just by testing things out on a small scale. We’re trying to figure out what makes the most sense for our survival while still getting food to folks who need it.

We started with a food share that we structured by polling people to see what they would want and how much they paid for groceries. But by the end of the season, due to underpricing our produce in order to have prices our customers could afford, and being too far from the city to have a viable work trade, we didn’t break even, not even close. We even had to hustle and clear out sheds and sell equipment just to buy seed.

The next year we got a grant to purchase a greenhouse, and we decided to grow seedlings and teach about gardening and food systems and sustainable farming practices. We wanted to promote backyard gardening, and we saw a niche for organic seedlings. Also, we wanted to sell seedlings to folks to grow their own food, and those sales helped offset the cost of the food share a little bit. We sold to schools and individuals and some organizations.

Things were going great. But then we had to move off of the land we were renting. While we’re now in this awesome place closer to Durham, it’s still not our own. So it’s hard to think about the sustainability of our farm without land security.

Land security is a big issue for young farmers. With more than half of all U.S. farmland owned by farmers 55 and over, and farmland disappearing due to development or prices increasing beyond affordability for new farmers, many are forced to rent. Young and beginning farmers pay the highest rates for leased farmland, and the majority of acres in operation by farmers under 35 consist of rented acres.

This provides no security for a business invested in literally putting down roots. Lack of land security often results in a lack of job security. According to a report by the National Young Farmers Coalition (NYFC), 73 percent of young farmers surveyed rely on off-farm income to make ends meet.

Christina Rivera-Chapman: We keep running into this wall. It’s hard to ignore the fact that we need our own land. We need land to invest in for the next generations. We need to be able to put up structures and not have to walk away from them and start over each time. I think for both of us, but maybe more so for Tahz, who has been farming a little longer, there’s a certain amount of heartbreak to keep investing time and energy into the soil and have to start over again somewhere else the next year. We don’t even know if we’ll still be on the land we’re on now this time next year. That doesn’t feel very powerful.

Also, it takes time to build up soil. We’re reclaiming and renewing land; we add value to the land we work. Landowners should be paying us, if anything! At this point, for me, it’s been eight different pieces of land I’ve worked, and Tahz, his family is coming from lines of sharecroppers, and he can’t repeat that. It’s all about who owns the land. All these new initiatives we are trying in this movement don’t shift power unless we shift who owns the land.

TW: I think it’s critical especially in the South, with what’s going on with Black land loss, for folks to figure out how to stay on their land. There’s this weird cycle where folks are on land and it’s a working farm, but once the farmer ages out, the rest of the family cashes out. There’s gotta be a way to think of stewardship beyond just one or two generations. I think the ancestors who were securing land at the time of the turn of the century were trying to avoid that. I think they were thinking really broad. They were thinking about their kids and their grandkids and those kids’ kids. 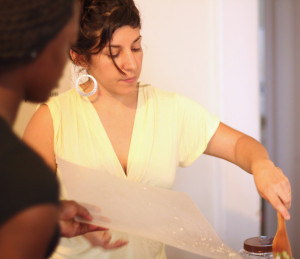 Cristina first started working in the garden as an educator in Brooklyn and then began developing curriculum for an urban farm non-profit in Red Hook where she worked with youth for five years.

CRC: I hear from youth and they say, “We need jobs.” They are really passionate about wanting to transform the food system, but they also need to bring resources into their own homes. A huge factor in whether or not they are able to commit the time that they do is if they are paid. There are a lot of youth of color involved in farming here, but it’s through non-profit organizations who are giving the staff positions and paid jobs to mainly White constituency. So a lot of these youth are being targeted for the grants but not targeted later for the positions.

Tahz and Cristina are looking into how to own land communally with a group of fellow young people of color also interested in land stewardship or simply obtaining land security for their families.

Tahz found a lack of organizations in Durham that focused on connecting young Black farmers to available land. So he started his own elaborate letter-writing campaign to absentee landowners found through county tax records. He is meeting with lawyers to map out the legal logistics of how to own land communally. And their group (who also meet for what they call “Just Us” dinners, which provide a safe space for people of color in their community to share their ideas and grow their work) is being advised by local Indigenous elders who Tahz and Cristina have formed friendships with over the years.

TW: Our friend Vivette, who is a member of the Occaneechi Band of the Saponi Nation, lives here and can trace her family back to the 1600s, and she’s going to help us frame some of the conversation as far as remembering what communal models have already existed. I think we need to reach out to land ownership models that existed pre-colonization. I think that’s where solutions are. In some ways it’s intimidating because there’s really no systemic support for that now, but we know that there are systems that existed before this system.

CRC: If we used our collective skills and talents as forms of trade within communities, think about how vibrant and dynamic the community could be. Like the one we work in now, where we are working toward structures to share resources like our toolshare program, or where we are creating child care for others to be able to do their thing, or trading food for gardening. Systems like that feel more compelling to me. I’m not interested in everyone becoming farmers. It’s more about how to make a cooperative economy that’s dynamic enough to support what everyone needs to do.

Working toward consensus is a slow process, what we have to remember is that this shit takes time. Transforming systems, building community, it doesn’t happen overnight. Taking the time to first build trust really makes the difference. I think that’s one of the reasons why I love our Just Us dinners, because it isn’t about getting together to work on some crazy big project. The crazy big project is getting to know each other, relationship-building and building trust. For me that is huge, and I think it’s undervalued. If you don’t trust, then pursuing consensus gets overshadowed by the distrust.

TW: I think another thing we try to do in our group is support multivisions instead of just one homogenous vision. I think that’s where things have broken down in the past. Groups get stuck on pushing one vision, and it breaks down because some people don’t want to do all that. They just want to grow food or have space to organize their own programs, or they just want to take care of their family.

When you’re working toward consensus for one homogenous vision, I think that’s where it gets scary because you have to trust this person to hold your vision in mind.

CRC: It’s also important that it’s the right solutions, and if it’s right, then it will work out, but it has to come from the larger community—we have to be careful about getting too insular and too exclusive. Neither of us is interested in communes. Because your world gets too small. We’ve shied away from being at group meetings about all different things every day of the week, and it’s always the same people. It’s like, I go to your fundraiser to give you money that you just gave me at my fundraiser. We need to make sure we’re not getting sleepy.