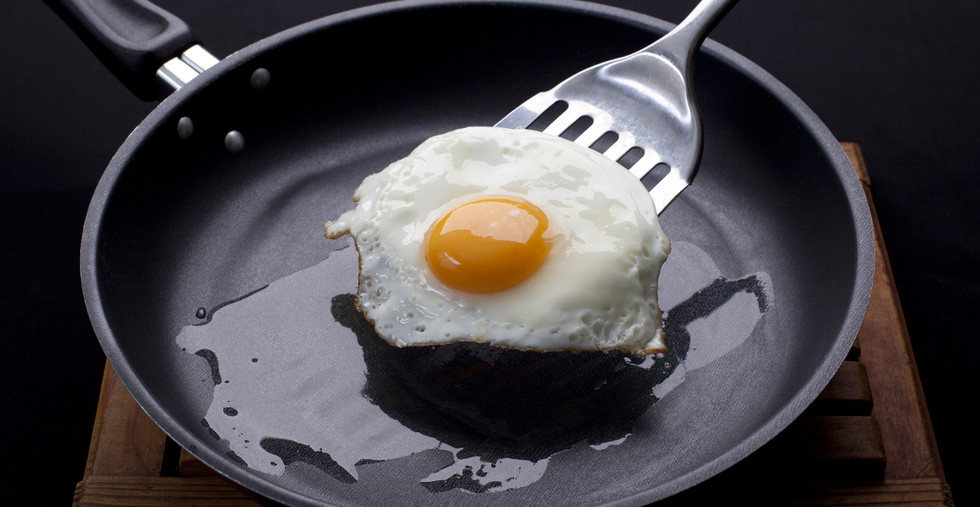 Chances are high that you or someone in your family has at least one piece of nonstick cookware in the kitchen. And if you eat take-out food, you’ve probably encountered packaging treated to resist grease, oil, and moisture. What this means is that it’s extremely likely that highly fluorinated chemicals—which are specially engineered to create these durable coatings—are part of your everyday life.

These chemicals are used in fast food wrappers, pizza boxes, microwave popcorn bags, in baked goods packaging, hamburger clamshells, and disposable paper plates. And as durable as these compounds are, under some circumstances, they can end up in food. In fact, these chemicals have been found in meat, fish, dairy, and produce.

“There are over 3,000 highly fluorinated chemicals,” says Simona Balan, Green Science Policy Institute senior scientist. “The quality they all share is that they are all incredibly persistent and will stay in the environment for as long as thousands of years.”

In addition to finding these extremely persistent, man-made chemicals in food, scientists have also found them in people—including children—all around the world. And there is a large and growing body of evidence linking this class of chemicals to a spectrum of health problems. These include certain cancers, as well as impacts on development, on the immune and neurological systems, and on hormones.

Now a group of more than 200 scientists from 38 countries have come together to express their concern about the ongoing and widespread use of these chemicals and to call for policies that would limit their production and use—and encourage development of alternatives. These scientists have signed on to what’s being called the Madrid Statement, published today in Environmental Health Perspectives (EHP).

According to a report also released today by the Environmental Working Group (EWG), U.S. Food & Drug Administration (FDA) testing of these compounds used in food packaging and cookware has failed to fully determine how the chemicals may break down or what their long-term health effects may be. EWG also criticized FDA and manufacturers for lack of transparency about the safety of these substances, which also appear in waterproof and stain-resistant clothing and in some cosmetics.

Figuring out exactly where these chemicals are being used isn’t easy. For one, there are lots of them. Some are what are called “long-chain” and some “short-chain,” a distinction that’s become important to discussions about environmental and health effects, and how these chemicals are regulated. More than 10 years ago, the U.S. Environmental Protection Agency (EPA) began working with chemical manufacturers to voluntarily phase-out the “long chain” highly fluorinated compounds, which are known to be particularly persistent in the human body and whose adverse environmental and health effects have been well documented.

In response, manufacturers began to substitute “short-chain” compounds. According to the FluoroCouncil, these provide “the benefits” of the “long-chain” compounds, but as the group’s executive director Jessica Bowman said in a statement, “are not expected to be harmful to human health or the environment.” The FluoroCouncil objects to the way the Madrid Statement has grouped all highly fluorinated chemicals together—chemicals it says are an “essential technology for many aspects of modern life”—and does not focus solely on the “long-chain” compounds.

But, “some of the longer ones break down” into the even longer lasting forms of the chemicals, explains Linda Birnbaum, director of the U.S. National Institute of Environmental Health Sciences and National Toxicology Program. While the shorter compounds “don’t persist in people” the same way the longer ones do, she adds, “they do persist in the environment.”

There’s also a lack of good substitutes for these chemicals as they’re currently used. As has happened with flame retardants and bisphenol A (BPA), it turns out that highly fluorinated chemicals that have been identified as hazardous have been replaced with others that are similarly problematic. And when it comes to cookware and food packaging, there are no labeling requirements for these coatings. That is something the Madrid Statement calls for, however.

Debbie Raphael, director of the San Francisco Department of the Environment, says her city signed on to the Madrid Statement, because it “sees itself in the role of an educator.” The department hopes to help consumers understand what they’re buying. Through its environmentally preferable purchasing program, the city can also help make safer products more widely available, she explains. “We definitely see a role for local government in making healthy choices,” says Raphael.

Chemical manufacturers maintain that the highly fluorinated chemicals are safe—and they are indeed approved for food contact use by the FDA. The FluoroCouncil says they are needed to preserve “the integrity of food packaging,” to help extend food shelf life and reduce the overall amount of plastic packaging. Nonstick cookware, says the FluoroCouncil, allows “for healthier cooking.”

But as Arlene Blum, Green Policy Science Institute executive director and Madrid Statement author, puts it: “Before adding any fluorinated chemicals to consumer products we should ask first whether we really need them. And if they are indeed necessary, can the same function be achieved with a safer solution?”

We really need to ask another question as well, says Raphael. “If consumers knew that in order to have nonstick, it meant they would be using a toxic chemical that ending up throughout the environment and that accumulates in animals and humans, they might ask: Is it worth it?”

Given all the questions and the evidence to date, long-time environmental health advocate and U.S. Right to Know co-founder Stacy Malkan recommends reducing the use of these chemicals across the board and getting rid of the nonstick cookware. “The scientific community is saying these chemicals are too risky to use and companies should be taking this very seriously,” she says.

The take away for consumers? While the chemicals’ manufacturers argue that that not all these chemicals are equally hazardous, the Madrid Statement says, when it comes to nonstick cookware and greasy-food packaging: Avoid it.