This Pastry Chef Wants You to Eat Fewer Sweets

With her popular #Dessertworthy campaign, Emily Luchetti hopes to help Americans re-think their approach to dessert. 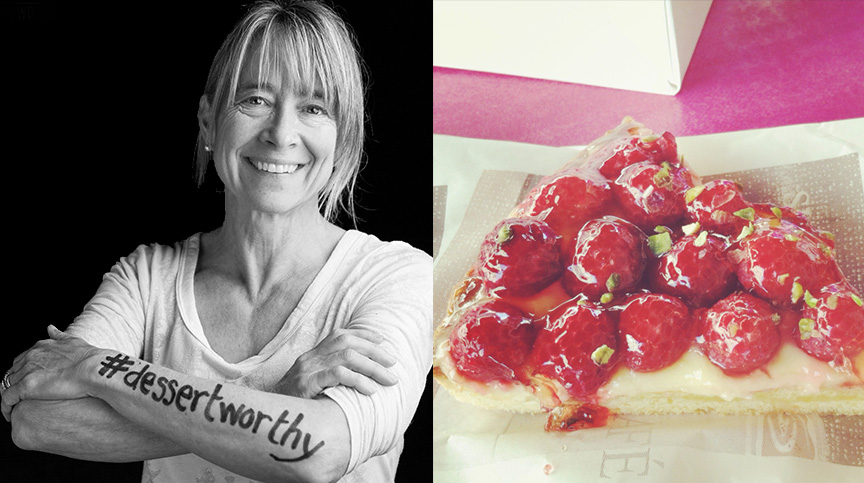 As a pastry chef with 20 years of experience under her belt, Emily Luchetti was tired of being asked why she’s not overweight. As the Chief Pastry Officer at Big Night Restaurant Group in San Francisco and Board Chairman of the James Beard Foundation, she has been perfecting the art of making pastries with fresh, seasonal ingredients. But that doesn’t mean she thinks dessert should be eaten every day. Through her work, Luchetti says, “I’ve learned how to put it all into perspective—how to deal with having sugar around me all the time and still lead a healthy life.”

In that spirit, last July, Luchetti wrote a manifesto and launched a social media campaign called #dessertworthy, intended to remind people that sweets should be savored, appreciated, and eaten with care. In less than a year, over 1,000 people have shared photos of desserts they deem “worthy” on Instagram, and the campaign has reached over 200,000 users on Twitter.

We spoke to Luchetti about her campaign, the ubiquity of sweets in our culture, and what ingredients make desserts truly “worthy” in her eyes.

How were you inspired to start the movement?

There’s so much sugar in processed foods that we shouldn’t be eating at all and we’re not even aware that we’re eating it. Who thinks that salad dressing has sugar in it? Who thinks that canned tomato soup or any other kind of soup has sugar? You have to be really conscious of what you’re eating. If we just stopped eating processed foods with all the hidden sugars, we could still have dessert. Another thing is that dessert has also turned into something that isn’t an occasional treat—like it used to be. Now it’s something that we have for breakfast, lunch, and dinner.

I love desserts and I think they really add a lot to our lives. If you’re having a birthday party or any other celebration, there’s a dessert there, and it’s something that makes an event more special. They have the power to give such pleasure, so I don’t want to see anyone giving up sweets completely when that’s not necessary. Let’s put them in their proper place. Let’s start asking which desserts are worthy to eat and which ones aren’t.

How did dessert become a daily indulgence?

Well, I think it’s a couple of things: One is that serving sizes have increased. Twenty years ago, if you were having a muffin, it was a small muffin. Now it’s probably two muffins in one. People are also more “on-the-go” in the morning; many people don’t make eggs or oatmeal for breakfast, they grab a muffin or croissant at the coffee shop and go on their way because it’s more of a quick fix. You might as well be having dessert. I think the constant marketing has definitely added to it as well. Now any store has candy at the checkout. You go to Home Depot or to the gas station and there’s candy, cookies, and packaged cakes.

The Dietary Guidelines Advisory Committee recently recommended that sugar should be no more than 10 percent of our daily calories. Do you think there is an increase in public awareness about the negative health effects of eating too much sugar?

I think that there is an increasing awareness, but it’s also just the tip of the iceberg. People are hearing about it, but at the same time, whether or not they’re actually changing their daily practices is another thing. The amount of soda people are drinking has decreased dramatically in the last few years, so that’s something that’s really registering. It’s also important for people to understand the difference between the added sugars you find in cookies, salad dressings, and other processed foods, and the natural sugars you find in fruits and vegetables. When we talk about reducing intake, we’re talking about added sugars.

Do you see the Type 2 Diabetes and obesity epidemics as social justice issues?

I think that there are two things happening. One is that there needs to be access to healthy foods across all demographics. That’s one of the things that Wholesome Wave and Michel Nischan are doing so well—increasing the value of food stamps for whole foods at farmers’ markets. A lot of the unhealthy food is also being pushed by the manufacturers; the processed foods with a lot of hidden sugars are inexpensive. It’s easy to say, “don’t buy it,” but on the other hand, you have to have an alternative that you can afford. I also think a lot of it has to do with education. People need to have the education and the knowledge about healthy food.

Do you believe that desserts made with seasonal produce can foster more appreciation for dessert and help reinforce the message that it’s not necessarily for daily consumption?

I do. If you eat a dessert that has seasonal fruit in it—fresh strawberries, for example—it tastes so magnificent that it raises the bar for your taste buds. So then if you see a strawberry pie at the diner in December, you’ll look at it and say to yourself, “There’s no way that could be as good, because those strawberries aren’t in season.” In-season produce has so much more flavor, perfume, and texture.


What seasonal ingredients are you excited to use in your desserts this spring?

I love it when apricots come in because their season is really short. One of my favorite things to do with them is to make a ton of jam. I also get excited about strawberries. What’s great, too, is that when the strawberries start to come out, you know that it’s just the beginning of the season, and all the other berries are on their way. I love doing things with blueberries, raspberries, and strawberries.


What are some of your favorite dessertworthy treats?

One of my favorite dessertworthy treats is just a little piece of 70 percent [cacao] chocolate, or sometimes even 85 percent. I almost like that bitter taste, because one is enough to satiate me. Sometimes I’ll have a few toasted, whole almonds with the chocolate.

I also think it’s really important for people to think up a comfort food that doesn’t have sugar in it, so when you have a really bad day, and you’re craving that chocolate chip cookie, or it’s 3 o’clock and you need that pick-me-up to get through the afternoon, then there’s some other food to go to. Mine is brown rice. I’ll cook up a big batch of it, and then heat up a little of it in the microwave with some really good olive oil and salt on top, and that is so delicious and satisfying.

How can people get involved in the dessertworthy movement?

You can go on Facebook, Twitter, or Instagram, post desserts that you feel are really delicious, and tag them with #dessertworthy. You can also share your experiences and stories with the dessertworthy community: how you maintain a dessertworthy lifestyle, and what inspires you to be healthy, but at the same time enjoy an occasional dessert.