A near-monopoly in the seed industry leaves farmers with few other choices than seeds coated with neonicotinoids.

If you’ve been following what’s happening with bees in this country, you’ve probably heard about neonicotinoid insecticides (or “neonics”). The most commonly used insecticides in the world, neonics are extremely toxic to insects, including beneficial ones like bees. Not only have they been linked to a decline in honeybee numbers, but a new research article published in Nature found that seeds coated in the insecticide have a negative effect on wild bees on farms. Wild bees, such as bumblebees, contribute billions of dollars of value in pollination services to crops.

Neonic-coated seeds are incredibly common. In fact, almost all corn seed and most soybean seed is pre-coated with the insecticide. The main issue is that farmers have limited access to uncoated seed. A recent article in Progressive Farmer revealed that despite big doubts expressed by many scientists about the need for harmful pesticide seed coatings, farmers are being pushed hard by seed companies to continue using them. Most major companies do not even offer uncoated corn seed. The companies also include incentives to buy coated seed in the form of insurance: If their crop fails , the farmer will get a 100 percent rebate. Without the coatings, the rebate is only 50 to 75 percent. “That’s one of the reasons we throw everything on the seed,” farmer Matt Hughes told Progressive Farmer.

Not discussed in the Progressive Farmer article, and likely an important reason why farmers are buying neonic-coated seed, is the fact that the near-monopoly in the seed industry leaves farmers with few other seed choices. 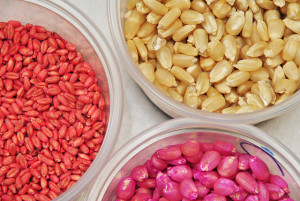 Starting in the 1990s, and continuing in the 2000s, the largest seed and pesticide companies went on a buying spree, gobbling up a large number of smaller seed companies. This is shown graphically by Phil Howard at Michigan State University (see Figure 2). The four largest seed companies control nearly 60 percent of the global patented seed market, according to Mary Hendrickson of the University of Missouri. This fact constrains farmers’ choices.

The consequences are illustrated by the increased ability of seed companies to charge excessively high prices for corn or soybean seed, and to supply pesticide-coated seeds exclusively, which contributes to those prices. As agriculture economist David Widmar points out, using Purdue University data, corn seed prices have increased consistently since 2007. And more importantly, while seed typically cost about 10 percent of farmer revenue for several years before 2007, it has averaged between 11 and 12 percent for the past six years, rising to almost 16 percent in 2014. Widmar believes it could account for a whopping 20 percent of farm profit in 2015.

As a recent article in Environmental Science and Technology shows, about 80 to 100 percent of our corn seed, and almost half of our soybean seed, is coated with insecticides. This article challenges the claim commonly made for years that Bt corn seed, which is genetically engineered to kill several types of pest insects, had dramatically reduced insecticide use. It turns out that agencies like the U.S. Department of Agriculture (USDA), which record pesticide use, have not included seed treatments, so these pesticides were not accounted for before this article. The amount used is likely lower, because it takes less insecticide to coat seeds than to spray onto crops, but the area covered (number of acres) is now much greater.

The Environmental Science and Technology article points out that while about 30 percent of corn acres were treated with insecticides that was sprayed on or applied to the soil, now about 90 percent of corn acres are treated with coated seeds. This exposes more helpful insects like bees and other pollinators to these pesticides. The ability to patent engineered traits like Bt has also facilitated domination of the seed industry by very few companies, which facilitates the ubiquity of pesticide-coated seed.

Seed Coatings: Worse than Nothing

The Progressive Farmer article also points out that most agriculture scientists have found that treating seed with these insecticides provides little or no benefit most of the time. As University of Minnesota Integrated Pest Management (IPM) extension scientist Bruce Potter put it,  “Growers are viewing it as insurance, but the data on neonicotinoid use in northern soybean areas suggests that they’re buying insurance they probably don’t need.” It is probably worse than that–some evidence suggests that farmers might be shooting themselves in the foot by using these coated seeds.

Several studies have shown or suggest that neonics may be doing more harm to helpful insects than to the insect pests they are supposed to control. For example, it has been estimated that biological control–a component of ecologically-based farming, a low pesticide farming strategy–may save farmers about $240 million in losses per year in just four Midwestern states without the help of treated seeds or other insecticides, by killing invasive soybean aphids. Other research has shown that neonic-coated seeds harm the very insects that would otherwise kill these pests. Meanwhile, the coated seeds do not control aphids, the nation’s most harmful and expensive soybean pest, which means that it does not reliably improve yield either.

More recently, Margaret Douglas and other researchers at Pennsylvania State University noticed that slugs had become noticeably more destructive of soybeans. Through their experiments, the scientists found that neonic seed treatments were harmless to slugs, which accumulated the neonics in their slimy little bodies after feasting on soybean plants. Unfortunately, the beetles that eat the slugs and keep them under control, were not so lucky. The loss of these crop guardians—whatever you may think of their choice of cuisine—resulted in a 5 percent loss of soybean yield.

All this comes on the heels of the European Academies Science Advisory Council’s conclusion that the use of neonics is likely having severe negative effects on pollinators and organisms that provide natural pest control—which is important for industrial farms, as well as organic, providing billions of dollars-worth of food. And because many birds depend on the insects killed by neonics as food, the use of coated seeds has also been associated with the decline of several bird species that are often found near farmland.

Neonics also frequently get into our water, according to data and analysis from the U.S. Geological Survey, in amounts that may harm aquatic organisms that are important source of food for fish and other animals.

The ubiquity of these coated seeds is just one more window into the way corporate agriculture works. Instead of adhering to the short-sighted dictates of the seed and pesticide industry, we need to end the use of neonic seed coatings before they do any more harm. We also need to reduce our dependence on corporate seed by re-investing in our public-sector crop breeding programs, with a mandate to produce open-source (non-patented) seeds for agroecological farms. Pollinators and other helpful animals will thank us.