Reporting Live From a ‘Food Desert’

Heritage Radio’s new Saxelby Scholars program gives teens the tools and training to tell stories from inside a food-insecure neighborhood. 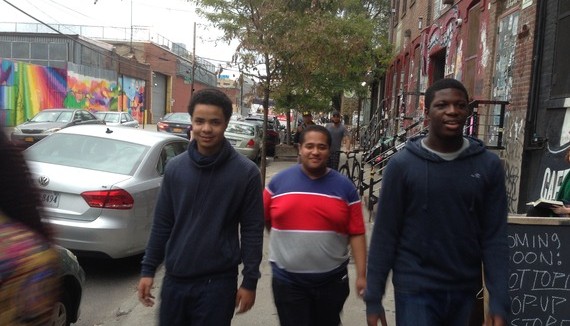 “At 6 a.m., I gotta get my kids up, grab my things. Sometimes I grab a sandwich, sometimes I grab nothing.” This is the voice of a mother and resident of Far Rockaway, New York, as recorded by her 18-year-old son Joshua Miranda. He produced a radio segment about her efforts to eat and cook healthy food, in this under-resourced neighborhood on the outskirts of New York City.

According to census data, one in three households in Far Rockaway earns less than $25,000 a year, and the neighborhood would be referred to by many, including the government, as a “food desert” (a term some food activists dislike). Time to cook a meal from scratch or even just sit down to eat is a precious commodity in many households here.

In 2014, the food-focused Brooklyn radio station Heritage Radio Network (HRN) started a program to not only teach teens how to produce stories for radio, but also to help them share their perspective on food in their communities. Far Rockaway seemed like the perfect starting place.

“We see one of our goals here as bringing new voices to the floor in the food conversation,” says HRN’s executive director Erin Fairbanks. “Teenagers and high schoolers are people you don’t often get to hear from, but they’re some of the most impacted in terms of food access and food insecurity.”

Miranda is one of five students selected for the first Saxelby Radio Scholars program, which brought a handful of 17- and 18-year-olds together at the HRN studios. The students were chosen by a selection committee made up of community leaders, food and radio experts, and Pam and Bill Saxelby, the program’s funders. (Ann Saxelby, their daughter, is the owner of Saxelby Cheese and wife of Patrick Martins, the owner of Heritage Foods USA and founder of HRN.)

Students commit to five sessions of training, talk about their experiences with food, and learn about radio from volunteer radio producers, engineers, and other leaders, says Caitlin Pierce, HRN’s program manager, who oversaw the scholars.

Dekendra Dazzel says that before she became a Saxelby Scholar, “I felt like it was just me thinking that the stores didn’t have a lot of greens. I didn’t know other people felt the same way.” For her segment, she interviewed Far Rockaway residents about their troubles eating well and delved into whether farmers’ markets and community gardens can help those in her community eat the way they want. She interviewed a local resident who says of the farmers’ market, “I usually get on buses and trains to find fruits and vegetables that are adequate, and I don’t have to do that anymore.”

Justina Utionkpan, whose family moved to Far Rockaway from Nigeria, noticed stark differences between the food she ate in her home country and what’s now available to her. In her radio piece, she focused on the plethora of fast food in her neighborhood—something which her Nigerian parents strongly disapprove of spending money on. As Utionkpan said in a phone interview, “There’s a deli on every corner. This has an impact on people’s health.” She recognizes that when cheap, unhealthy food is readily available, fewer people will bother cooking at home. Many of her classmates eat fast food almost every day.

“When you tell a high school student that they’re making pieces about food in their community, they think about food as a big idea, and community as a big idea rather than themselves within it,” says Pierce.

By focusing on the personal, their stories began to take on a candid quality that trained journalists don’t often have. “The students spoke from the heart and it ended up being really compelling,” Fairbanks says. The students illuminated many of the topics food advocates focus on, “But it wasn’t because they had a strong background in food or policy,” she says. “They were just telling it like it is.”

The radio pieces explore topics like the impact of good food on physical performance, a stepfather’s struggle to eat healthy, or how a lack of time can change a mother’s eating habits. In a media landscape where food access is often discussed by advocates and doctors focused on policy change, the Scholars’ radio pieces are a breath of fresh air for their direct line into people’s daily lives. But that doesn’t mean the students aren’t curious about the forces that shapes their community.

While discussing her story, for instance, Utionkpan expressed curiosity about the part of government that might be responsible for making healthy food easier or cheaper to purchase. The U.S. Department of Agriculture may be a foreign concept in Far Rockaway, but its effects are all too real.

“I don’t understand why they make healthy food expensive, but then expect people to eat healthy,” Utionkpan says. “There’s economic hardship everywhere—even here—and people turn to the cheapest thing they can find.”

Heritage Radio Network is currently running a Kickstarter campaign to rebuild their website and continue broadcasting the work of the Saxelby Radio Scholars, in addition to the 39+ live shows that play on HRN each week.