The Color of Food: These Sisters are Building a Second Career as Farmers | Civil Eats

The Color of Food: These Sisters are Building a Second Career as Farmers

Sisters Carol Jackson and Joyce Bowman work on My Sister's Farm even as they deal with complicated property laws. 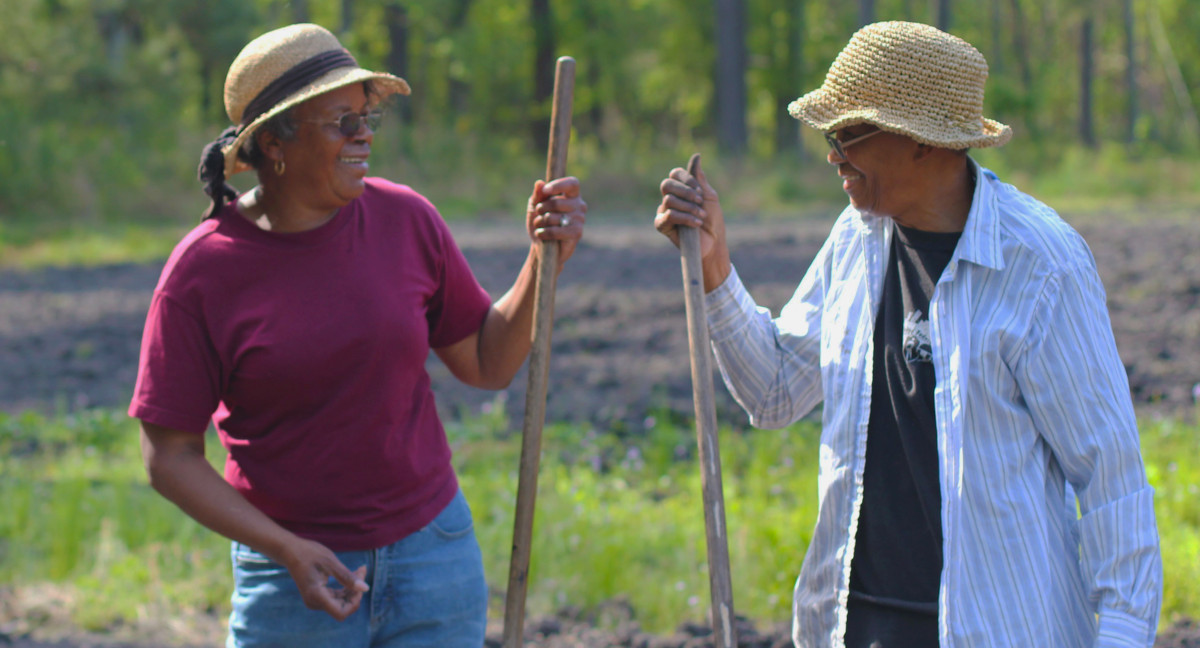 This is the second in a series of four excerpts from The Color of Food: Stories of Race, Resilience, and Farming. Read more about the book and the author, Natasha Bowens. Read the first post here.

I head toward the lowlands of the North Carolina coast to meet with two sisters in their sixties who are trying to revitalize their family land by growing food organically. This area where they grow has changed over the decades and now faces the challenges of land degradation, climate change, and heir property laws. This pair of women teaches us that ferocity knows no limitations; sometimes all you need is a sister by your side.

I am standing on the family’s land listening to the tiller’s engine run. Behind it walks Carol Jackson; her sister, Joyce Bowman, walks behind her, planting sweet potato slips. These two sisters grew up in Burgaw, North Carolina; both became teachers for special needs children and after retirement returned to the land where they were raised to grow organic vegetables together.

They call their farm My Sister’s Farm because both are too modest to take credit for the idea and each jokingly blames the other for getting them into it in the first place. They started more than ten years ago, slowly, first to keep busy and active in retirement and then to sell their excess harvest as production grew.

They sold shares to consumers in a community supported agriculture (CSA) subscription for a few years and now sell to Feast Down East Cooperative, a community distributor supporting local small farmers by buying their produce and selling to restaurants, markets, schools, and large CSAs. They are certified organic, members of the Southeastern African American Farmers Organic Network, and travel the Southeast attending meetings and conferences for farmers. The segment below is excerpted from an interview with the sisters.

Carol Jackson: We grew up down on Burgaw Creek, where the farm is. There were eight of us, five brothers and three of us sisters. There’s been so much that’s changed since then, I know that much. The road really used to be a dirt road. Now they have a lot of homes that have been built here. There is still farming that goes on here, but I would say mostly on a large scale now. Sweet potatoes, peanuts, corn, soybeans, blueberries and grapes are grown in this area on a big level. You’ll find that people have large poultry and pig farms around here.

But we used to have little people that grew a lot of stuff. During the ’50s, they used to grow a lot of cucumber and squash, zucchini squash and yellow squash, and we used to come down here and pick squash. There were also a lot of dairy farms. But now the little people don’t grow. It’s the big people that have taken over. The little farmer used to be able to take his five crates of strawberries down to the market and sell them to the trucks that would come in, but that’s closed down. Instead, what we have are McDonald’s and Kentucky Fried Chicken. They just came here in the last 10 to 12 years. 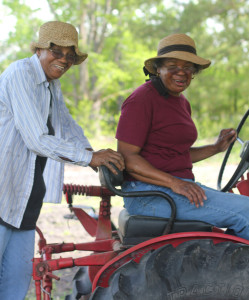 Carol points to the freeway that runs over the farm. That is the famous I-40 that destroyed the whole area. It was built around 1982. They moved our old house and put it on the other side of the road to build I-40. I think they did that with a lot of homes. The highway closed off Burgaw Creek that ran here, and our water runoff went into the creek. My dad had ditches set up into the creek. But now I-40 closed off our drainage, so when it rains, the water just comes back down here and floods. We can’t grow as much as we used to because of that. We would produce a lot more and could have a beautiful farm, but when it starts raining there’s nothing we can do.

One year, Joyce and I managed to get everything in the ground, and we had okra early, cucumber early, everything was early and looking good for the season and then, of course, it rained, and it all washed away. We would apply for drainage programs through NRCS or EQUIP but we can’t do anything permanent to the land because it’s heir property.

Heir property is land that has multiple owners, with each owner unable to make land-use decisions without consent from all the owners.

Typically, each successive generation is larger than the previous one. As a result, the land ownership interests grow smaller, yet the number of interest holders, or co-owners, increases. This results in too many cooks in the kitchen. With so many co-owners over generations, several typical situations arise: heirs no longer live on or even near the land; heirs don’t live near one another; heirs don’t even know each other; heirs don’t know how to find each other to communicate about the land; heirs don’t have a connection to or interest in the land.

This makes it very difficult to get unanimous consent for land use or the construction of permanent structures or alterations to the land, like digging new drainage systems.

Joyce Bowman: We have been writing letters to our nephews. We’ve been asking and asking for their consent on doing what we need to with this land. The land was passed down to the seven of us children, but my sister then passed, and her share went on to her sons. We have been asking them to sign the papers so that we can build our hoop house or divert the water, but they won’t sign. We’re ready to fly to New York and find them with the papers filled out. It’s crazy. This land is rightfully ours, passed down from our mother, and here we are having to ask consent from these boys who have no interest in the land.

I wish we could encourage young people to farm. I know my son isn’t coming in the field to help us, the youth are not doing that. We tried to get Carol’s grandson in the field but he said he didn’t want to mess up his shoes. He loves to eat the food, but he sure doesn’t like to work for it.

This interview has been condensed and edited for length and clarity. Photos of Carol Jackson and Joyce Bowman by Natasha Bowens.