Earn a Good Living Without a Tractor: A Market Gardener Tells You How

Jean-Martin Fortier’s farm sells $140,000 of food on an acre and half. Now he wants to help others do the same. 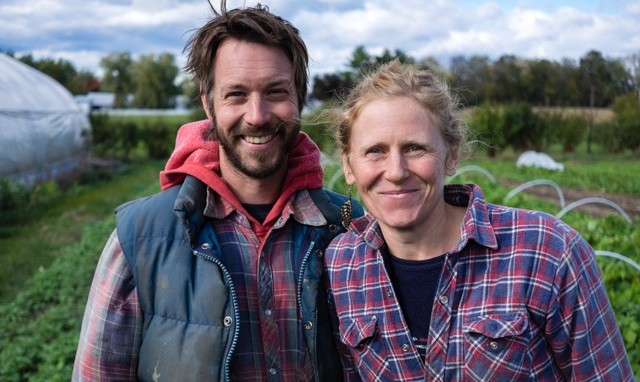 According to Jean-Martin Fortier, it isn’t a farmer’s job to feed the world. And he finds it absurd that many U.S.-based food and agriculture companies tell farmers they should do so. “Feeding the world? People in Africa don’t need the U.S. to feed them.” What we need, the Canadian farmer argues, is small farms feeding their communities, and that task is difficult enough.

Fortier recently took two years off from farming to write a book called The Market Gardener: A Successful Grower’s Handbook for Small-Scale Organic Farming. In it, Fortier argues that farmers can make six figures on just a few acres of land. At a time when most small-scale farmers have the odds stacked against them financially, and young people are hesitant to start farming for fear of failing to making a real living, the handbook is bound to attract an audience.

“I felt that there was a need for [a book] like this. I have been involved with growing the food movement. My response was to tell people that they can grow and here is how,” says Fortier. 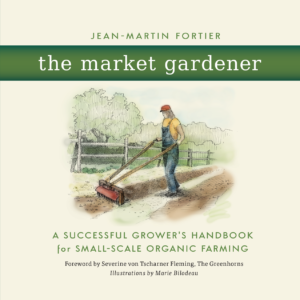 Fortier, born and raised in Quebec, began farming with his wife, Maude-Hélène Desroches, as interns and WWOOFers. Years later, they started their own project on rented land. Like many others, they dreamed of farming on their own land and worked hard to make that a reality.

Today, they grow a diversified mix of crops including beets, broccoli, salad greens, and carrots on an acre and a half. Their award-winning farm, Les Jardins de la Grelinette, clears $140,000 in sales annually. Fortier and Desroches work nine months out of the year and their CSA feeds 200 families a week during the summer months.

Fortier’s philosophy is “grow better, not bigger.” Better to him means not only better food that is grown in better soil, but it also means a better quality of life. He prides himself on the fact that he can take winter vacations with his family.

The couple’s approach to growing food is what Fortier refers to as “biologically intensive,” incorporating permaculture methods like conservation tillage, building permanent beds (as opposed to creating new ones every season), and crop rotation. And, like many young farmers growing in colder climates, he cites Eliot Coleman as an inspiration.

The Market Gardener gives the aspiring farmer the sense that they can pick up the book and follow it step-by-step to start their own farm. The book begins by explaining Fortier’s approach to small-scale farming and ranges from tips on how to choose a site to designing the layout. “The aim is to organize the different workspaces–inside and outside–so that the work flow will be as efficient, practical, and ergonomic as possible,” he says.

He troubleshoots through difficult topics and makes suggestions on how to fertilize organically, start seeds, manage weeds, insect pests, and diseases to practical advice on harvesting: “In order to avoid having to fetch more elastic bands in case we miss some, we always carry an extra box in our harvest cart.”

Many new farmers buy tractors early on in their business, seeing it as an important stepping stone. But Fortier emphasizes a different approach. “We could have followed a route similar to that taken by all other growers we knew: invest in a tractor and move towards a more mechanized growing system,” he says. “Instead, we opted to stay small-scale and continue relying on our hands and light power tools.”

In the book, he has an entire chapter dedicated to minimum tillage and appropriate machinery, like the broadfork and the two-wheel tractor. (The couple provides detailed information about all the tools they use and where to get them on their website.) The broadfork is the namesake of their farm, explains Fortier. “The broadfork traces its origin back to the grelinette, a tool invented in France by André Grelin in the 1960s,” he says. “We named our business, Les Jardins de la Grelinette, after the tool because it is so emblematic of our philosophy of efficient, environmentally sound, manual gardening.”

Fortier hopes book will filling a big hole in the existing literature around farming. “What I am presenting in The Market Gardener is not the ultimate set up but it is good enough to get started,” he says. “Growers starting 10 to 15 years ago didn’t have that.” He also believes that his practices can apply in many locations, for many people. “You will hear a lot of people say, ‘what you are doing on your farm, I cannot do on my farm,’ but I’m sorry–farming isn’t that different.”

Fortier’s approach to basic skills and design concepts can be used all over the world. Fortier and Desroches have spent time on farms in Cuba, Mexico, and New Mexico which he sites as inspiration. “We had been to Cuba, and we had seen acres and acres of farms running on permanent beds without tractors and thought that was a brilliant way to do it,” says Fortier.

These practices are commonly used in South America and Africa on both small- and large-scale farms, but they are far from mainstream in North America, and could have a big impact on farm productivity.

“My message is that if you want to get into farming–if you’re young and you don’t have access to land or capital, this is a pretty bright way to do it without a lot of input. And you can make a living,” says Fortier.