Vertical Farming Grows in The Land of Wide-Open Spaces

An urban farming method takes off in Wyoming. 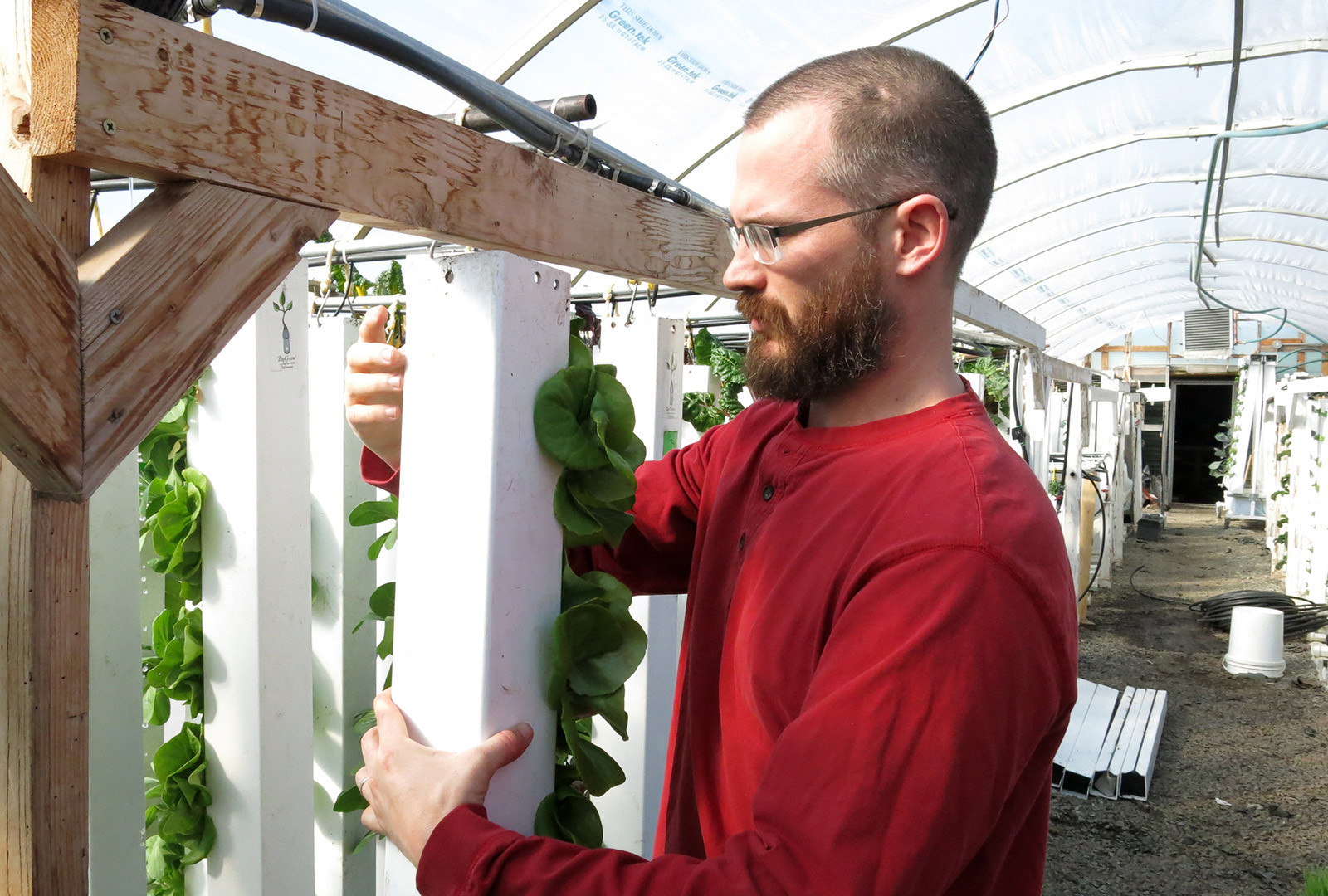 Storey’s set-up is an urban farmer’s dream: the waste from fish tanks fertilizes the crops through plastic tubing that drips water onto the vertical garden. The greenhouse is small, but produces a lot of food.

Like a proud father he shows off bok choy, butter lettuce and spinach.

“You can grow anything. People have grown some crazy stuff with the towers,” Storey says. “We’ve grown tomatoes and very large statured crops, watermelons. It works until they’re about 20 pounds apiece and then things start falling.”

An urban farmer’s dream in a decidedly not urban place.

Outside the greenhouse in Laramie, the infamous Wyoming wind howls, the winters are frigid and the soil is either silt-y or clay-like. If you want to grow stuff people actually eat in Wyoming, Storey says, you have to do it indoors.

While food hubs and farmers markets have sprouted up in urban areas, the local food economy has been slower to take off in much of the rural Rocky Mountain West.

Wyoming’s farms and ranches are the largest in the country. It has the fewest number of vegetable farms of any state. There are more acres of vegetables growing in Alaska than in Wyoming.

But there’s an unexpected push to create hyper-dense, super-efficient farms in the land famous for its wide-open spaces. Vertical gardens are popping up to feed Wyoming’s desire for local produce, creeping into one of the last frontiers for the local food movement.

For his part, Storey pitches his business as a local economic generator that produces fresh food replacing some of the produce shipped from thousands of miles away.

“Our community has been incredibly supportive,” Storey said. “Are they really with us on the urban farming level? Not necessarily, because they’re not urban people. They’re largely rural people.”

Wyoming is officially known as “The Cowboy State,” and beef and coal are the state’s top commodities. So when Storey started Bright Agrotech to build equipment for urban farmers, it raised some eyebrows.

With more businesses like Storey’s taking off in Wyoming, more would-be farmers are seeking out help in getting greenhouses up and running. That means Karen Panter, the University of Wyoming’s horticulture extension specialist, has been a lot busier.

“There’s an awful activity in this area largely because we haven’t had a lot of our own production within the state until just within the last few years,” Panter said.

Until recently there just wasn’t an interest in growing large quantities of vegetables in Wyoming, Panter says. But that’s changing, and you can see it in the data. The number of greenhouses in the state tripled from 2007 to 2012, according to the U.S. Department of Agriculture’s Census. Panter won’t be surprised if that trend continues for the next five years.

Part of the problem in getting a local food system up and running, Panter says, is the lack of infrastructure. Food hubs have grown popular in neighboring Colorado and other parts of the country to coordinate local food distribution and production. Wyoming is without one, although a hub is in the planning stages in the state’s northern Big Horn Basin.

Geography makes it tough too.

“Wyoming is considered by many to be a small town, with just really, really long streets,” Panter said. “Because we are a rural state, we don’t have, or did not historically have a lot of our own production. Virtually everything other than beef or a few other crops have been brought in from other states or abroad.”

Still, some areas of the state are ripe for local food entrepreneurs. Nona Yehia is one of the architects behind Vertical Harvest, a high density, three-story greenhouse currently under construction on the side of a parking garage in the ritzy ski town of Jackson, Wyo. The town’s high-end restaurants and wealthy visitors make it an ideal market for local food.

“Jackson has a very short growing period. We can only grow food really four months at best,” Yehia said. “So there is a pretty strong local food movement, but it’s fairly short-lived in terms of its seasons.”

That means the hotels, grocery stores and schools in Jackson that are clamoring to source locally, are for the most part out of luck. Vertical Harvest has enjoyed a flurry of media coverage. Yehia attributes the interest to the project’s novelty: a greenhouse going up in a rural ski town.

“There is a lot of conservative thinking in Wyoming, and people don’t see it as a food production state,” Yehia said. “And if we are changing those perceptions little by little with all these innovative, entrepreneurial projects, I think that’s an exciting place to be.”

It’s unlikely Wyoming will ever be a national powerhouse for vegetable production. But Laramie’s Nate Storey says businesses like his attract and retain young entrepreneurs. He grew up in Cheyenne, and says the state sometimes suffers a crisis in confidence.

That might be a bad thing for the state, but a good thing for Storey’s business. Most of his new hires are young university grads interested in farming that, until recently, had few opportunities to grow food in the land of wide-open spaces.

“We’re able to latch onto really smart people who want to stay in Wyoming,” Storey said, “but have never really had an opportunity to be part of something big here.”