How One Visionary Changed School Food in Detroit | Civil Eats

How One Visionary Changed School Food in Detroit

With a focus on healthier foods and local farms, Betti Wiggins has led Detroit’s kids through a food revolution. 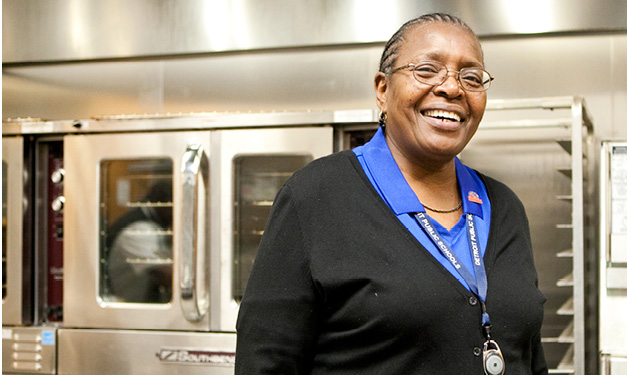 In the past four years, school meals in Detroit have been transformed. Gone are the chicken nuggets and sugary drinks. Now school cafeterias serve fresh fruit and mixed baby green salads, lean meat, low-fat milk, and whole grain breads. Better yet, some even serve produce from school gardens and local farmers.

The change hasn’t occurred overnight. The Detroit Public Schools Office of School Nutrition, which serves breakfast and lunch to more than 55,000 kids in 141 schools, has worked hard to create such a dramatic nutritional turnaround. And much of the credit goes to the office’s executive director, Betti Wiggins.

In 2008, Detroit Public Schools (DPS) was outsourcing its food service program. But the staff union had the foresight to hire Wiggins to propose bringing it back in-house. Her background as chief of nutrition for the District of Columbia and as a food services director in three other states, came in handy, and the district was convinced she was the one to turn things around.

Right off the bat Wiggins did away with the outside food management company, which allowed her to more than double the size of the food budget. (Before Wiggins came on board, DPS was spending 23 percent of its budget on food; it’s now 51 percent). The change in the quality was dramatic.

“One of the first things we did was turn the deep fryers off,” Wiggins says. “There are certain foods I don’t think we should be serving in schools. I don’t serve hot dogs and corn dogs; I think that’s carnival food.”

Next she increased the servings of fresh fruits and vegetables. Once a week the students are introduced to a new raw vegetable. If they don’t like the jicama, sugar snap peas, or asparagus the first time, it doesn’t matter. As long as Wiggins continues to put new food on their plates, the kids will eventually eat them. Since 2009, the students have also been eating brown rice and enjoying Meatless Mondays with hummus, eggs or cheese.

“Cafeterias should be viewed as an extension of the classroom,” she says. “We don’t do home economics anymore. That is where we are doing real nutrition education—on their plates.”

During Wiggins’ tenure, the Office of Nutrition staff has also grown to include lunchroom workers with nutritional training like Chef Kevin Frank, a Detroit native and graduate of the Schoolcraft College Culinary Arts Program. Chef Frank’s daily challenge is to create delicious and healthy meals that children will actually eat.

Thanks to Wiggins, Detroit public schools now buy 22 percent of their produce, including potatoes, apples, squash, peaches, and asparagus from farms around the state. They work with seven farmers, including Barbara Norman, whose farm, Barbara’s Blueberry Patch, sells 80,000 pounds of berries to the district each year.

Under Wiggins’ leadership, DPS became the first school district in the country in 2009 to offer free breakfast to every student regardless of household income. The goal has been to eliminate some of the social stigma associated with free food. As a result, more kids are eating a healthy breakfast than ever before. Breakfast—which includes yogurt, a granola bar, fresh fruit, and low-fat milk—is integrated into the school day and served in the classroom after the bell rings.

At lunchtime students can eat a free hot lunch and those participating in after-school tutoring and enrichment programs can also eat a free dinner. “A lot of kids come to school to eat,” says Wiggins.

The companion program to the meal service is the Detroit School Garden Collaborative. Wiggins comes from a farming background and has maintained strong ties to the agricultural community. With the help of a school board member, she started a farm-to-school program that now includes 76 school gardens. To make sure gardens thrive, each participating school has to sign a contract committing staff time to maintain its garden. DPS employs a garden director, a farmer, and a horticulturist to run the program.

The largest DPS farm is located at the Drew Transition Center, a school for young adults with special needs. There, a 2-1/4-acre farm and 96-square-foot hoop house produce corn, greens, and root vegetables. More than 7,000 ears of corn from the Drew farm ended up on the plates of schoolchildren throughout Detroit last year.

Another shining star in Wiggins’ $43 million dollar budget is a plan to turn an abandoned high school into the Kettering Urban Agricultural Campus. The site will include installing a 27-acre farm, 8 hoop houses, indoor growing areas, and a food processing center. Food grown and processed on the site will be used to feed schoolchildren and other members of the community.

Throughout the city, innovators from the Detroit Bus Company, the Green Garage, and Motor City Blight Busters are working to rebuild the city and grow its economy. Wiggins sees public school lunches as another sign of this positive change.

“It’s a rebirth,” she says. “It’s caring about our citizens.”