What can the average person learn from fine dining meals celebrating bruised vegetables, pasta ends, and other food industry byproducts? 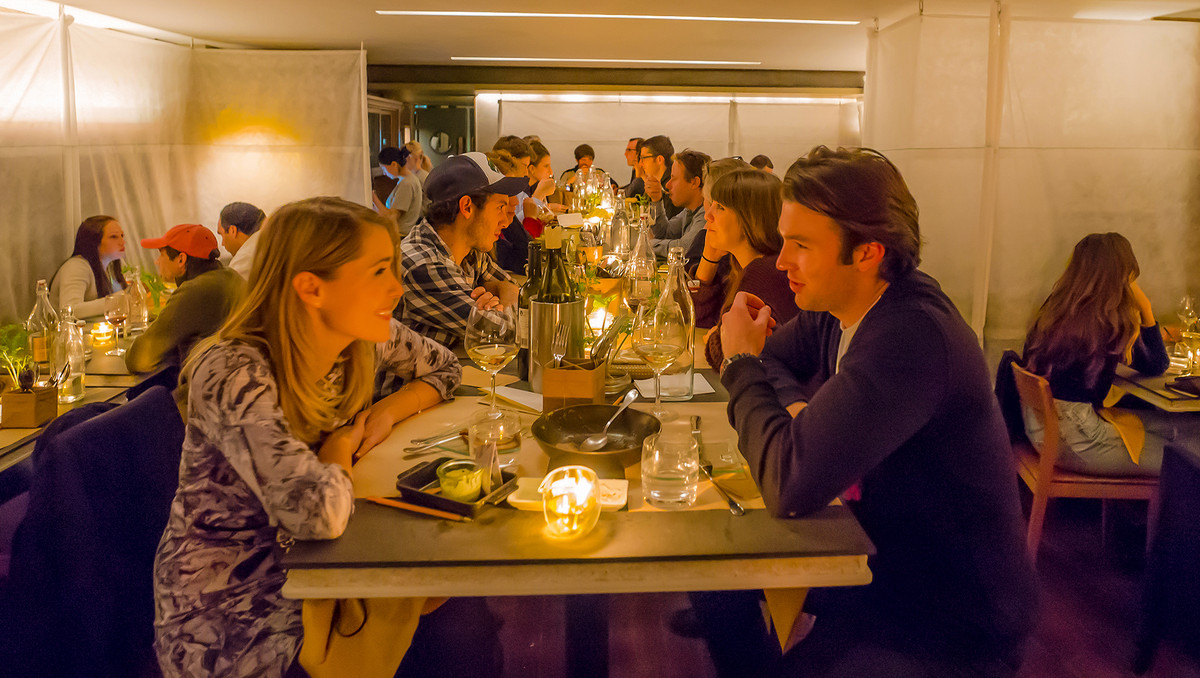 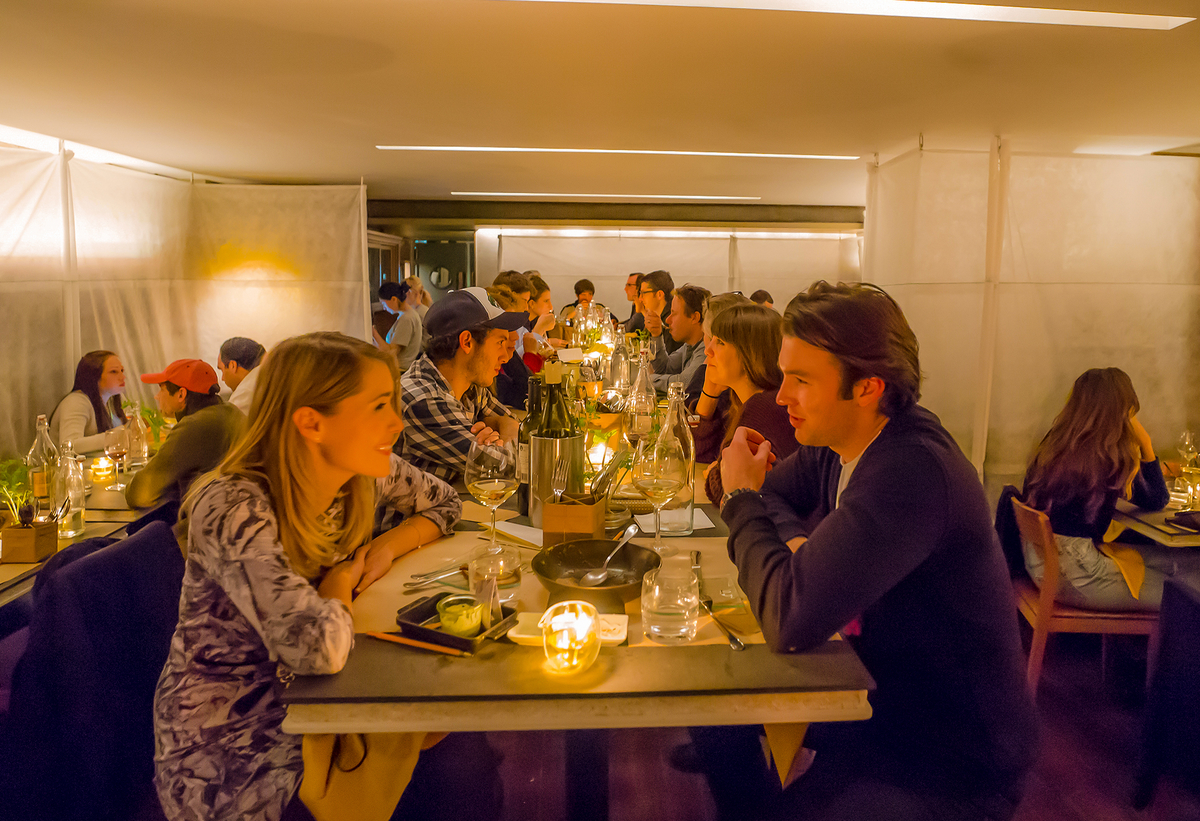 For a few weeks this March, New Yorkers lined up outside a trendy Greenwich Village restaurant for a chance to pay $15 a plate for food that most would consider garbage. The event in question was wastED, the innovative and ambitious dining project from chef and author Dan Barber, who transformed his restaurant, Blue Hill, into a pop-up aimed at showing the dining world how much could be done with scraps, leftovers, and industrial byproducts.

The 20-plus item menu included items like kale rib stew, pasta trimmings, and dog food, and came with a glossary that doubled as an education on all the perfectly edible food that we don’t eat—from broken razor clams to immature eggs.

The restaurant’s walls were draped with the soft white fabric used to protect crop rows from the cold, wind, and pests; a line of high tables in the middle of the room were grown from compostable materials and mycelium. Even the candles on the table were made from beef tallow—which, in a neat trick, was poured into a ramekin later in the meal to be eaten with bread made from spent grain from a Brooklyn brewery.

Barber has long been an advocate for ethical eating through his nonprofit farm and education center, Stone Barns Center for Food & Agriculture, and his TED talks and 2014 book, The Third Plate, have made him a leading spokesperson for sustainable food. But he saw the pop-up as more of a defense of the thrift and kitchen alchemy he says most chefs already tend to exercise, than a big statement on food waste in America.

“I’ve been wanting to show off for a while what the fine dining industry does every day, which is utilize waste,” Barber says. “That’s what chefs have always done, that’s what we’re good at doing, it’s in our DNA to utilize those things that would otherwise go in the trash.”

“On a lot of calls with producers, it didn’t take long to find out what was wasteful in their system. They opened right up. A lot of them were like, ‘we’ve been wanting to talk to someone about this stuff.’ The partnerships were great,” he says.

To that end, Barber brought in more than 20 guest chefs to work in the wastED kitchen for one night each. These were big names, including some of the best in the country: Daniel Humm, Mario Batali, Sean Brock, and April Bloomfield.

On the night I visited, Chicago’s acclaimed Grant Achatz made a cocoa-husk-smoked eggplant confit in a broth made from flat beer and the husks of coffee cherries, topped with peanut hearts and vegetable peels and stems. It was smoky, nutty, sour, and unbelievably delicious—a perfect example of the pop-up’s mission  of taking “ignored or uncoveted” foods and transforming them into something desirable. 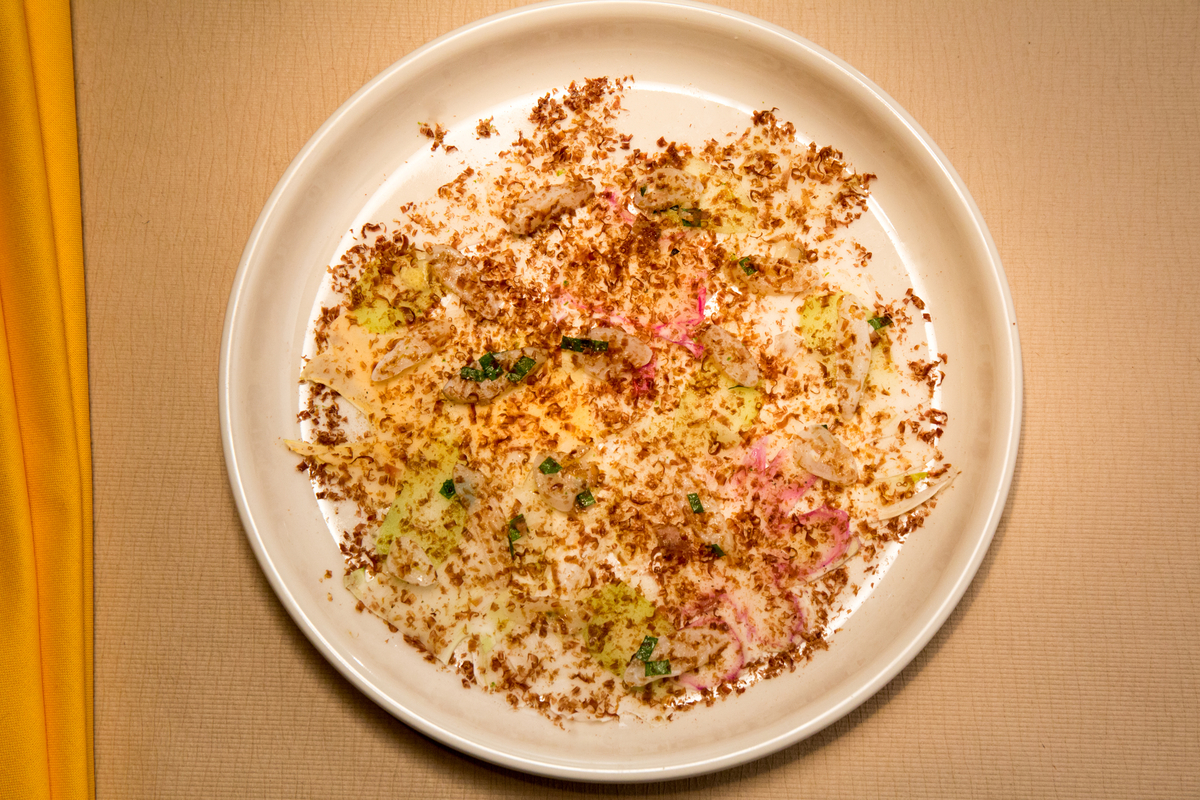 A “dumpster dive vegetable salad” composed of damaged vegetable shavings was elevated by a rich pistachio vinaigrette and a dollop of leftover chickpea water whipped into a foam.  A veggie burger patty was made with leftover pulp from a nearby cold-press juicery, and served with pickled cucumber butts and ketchup made with bruised beets from a Cornell field trial.

Desserts incorporated elements like candied mango peels and a chocolate-covered biscuit made from walnut press cake, the material leftover after pressing nuts for oil. Large-format bottles of wine came from waste-conscious wineries, and a small beer from Evil Twin was made from a second running of mash.

All of this could have been precious or ridiculous in the wrong hands–liberal foodies paying fine-dining money to eat table scraps is the stuff that late-night comedy sketches are made of. But reviewers have been impressed by the meals despite the stunt-y elements. The New York Times restaurant critic Pete Wells called the pop-up “a night of thoughtful, creative, entertaining and surprisingly tasty agitprop,” while the New Yorker described, “ordering horrible-sounding things that turned out to be delicious was a bizarre but exhilarating adventure.” 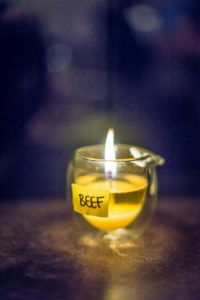 Of course, the chefs involved are so talented they could probably make cardboard and shoe leather taste good. But it’s a fact that begs the question: Will the 2,500 diners who attended the event be any more likely to begin hoarding coffee grounds or seeking out spent beer grains with which to bake?

And what about those in the restaurant industry who don’t fall into the high-end farm-to-table category? After all, the larger restaurant world does waste nearly 50 million pounds of food a day. And it’s not surprising to learn that chefs who source whole pastured animals and heirloom grains would need to use every ounce of what they buy.

The questions raised by wastED mirror those of the larger movement to reduce food waste. Yes, projects like the proposed Boston supermarket that will sell food that is near or past its expiration date, the New York supperclub dedicated to dumpster diving, or companies around the world doing everything from recycling spent grains to redistributing school lunch leftovers all sound great. They definitely make us think. But it will take a great deal more work to take the food waste problem from shocking headlines to game-changing solutions.

For his part, Barber seems confident that professional kitchens can play an important role in the next phase of food waste reduction. “I think there are answers to a lot of the problems in our food system, and we can look to restaurants and chefs to help solve those problems,” he says.