Is the Strawberry Field The Next Farmworkers' Rights Battleground? | Civil Eats

Is the Strawberry Field The Next Farmworkers’ Rights Battleground?

For Farmworker Awareness Week, we take a look at one of the nation's most troubling harvests. 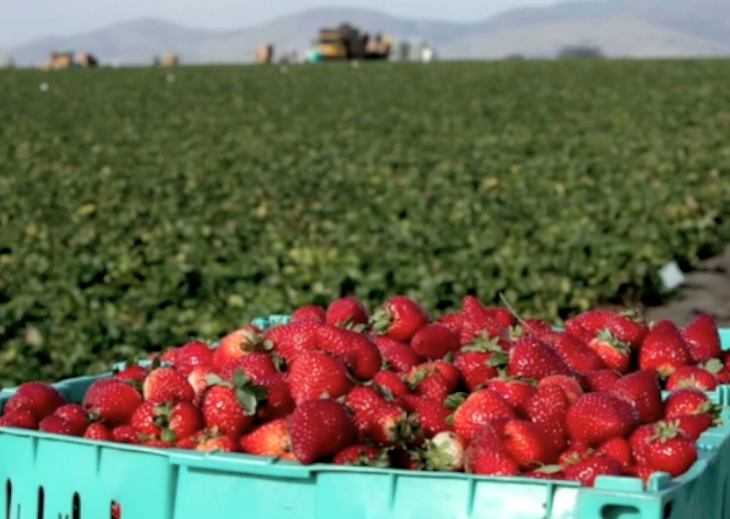 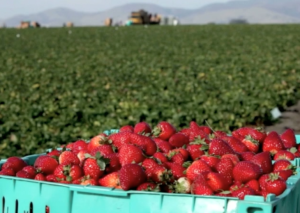 For many, a red, ripe strawberry elicits sweet memories of sunshine, summer, and childhood.

Glorietta, a strawberry picker in California, has quite a different relationship with the fruit. Hunched over picking for up to 10 hours a day for a mid-sized commercial grower, Glorietta—who asked that we not use her real name for fear of retaliation—says her body hurts all the time. She says the farm’s foreman constantly berates her and the other farmworkers. And she says the farm often fails to pay her adequately for the hours she works.

Worst of all, the strawberries Glorietta picks are making her sick. As she fills carton after carton, she experiences constant nausea, muscle weakness, and eye irritation from the chemicals sprayed. She says her employer does little to protect its workers from exposure.

In fact, says Glorietta, who has picked strawberries for more than two decades, “When we are sitting down to get our lunch, they are spraying near us when we are eating.”

Thanks to groups like the Coalition of Immakolee Workers and Alliance for Fair Food there has been a great deal of coverage of the challenges workers face in Florida’s tomato industry in recent years. But strawberry pickers in California and Washington pick the bulk of the nation’s supply, and do so under equally extreme conditions, chief among them being exposure to pesticides.

Not only do conventional strawberries contain high levels of pesticide residue (they appear on both a recent list from the Consumers Reports, and the Environmental Working Group’s Dirty Dozen list), but their production also requires chemicals that don’t directly impact consumers, such as Chloropicrin and methyl bromide, a “multisystem toxicant” used to fumigate the soil before the fruit is planted. Once the soil is treated, farmers often then apply a whole list of chemicals.

Roman Pinal, the Southern California regional director for the United Farm Workers (UFW), says strawberry pickers are more susceptible to pesticide exposure than the average farmworker because the fields are more densely planted than other crops, meaning chemicals are being sprayed or are drifting closer to farmworkers.

What’s more, compared to crops that are harvested once a season, strawberry plants produce fruit every two days—creating a situation where chemical management and harvesting occur “right on top” of each other, he says.

And while there are some policies in place protect strawberry workers from these chemicals, lack of enforcement has often been cited as an issue.

While the use of methyl bromide is set to end everywhere by 2017, it will likely be replaced by an equally toxic alternative on many farms. And the Environmental Protection Agency has yet to rule on its proposed protection standards for farmworkers and pesticide handlers.

Meanwhile, Glorietta and her fellow farmworkers often feel they can’t leave a job that is making them sick in the short term and increasing the likelihood that they will suffer from cancers and other illnesses down the road. Jesús Lopez, a community worker with California Rural Legal Assistance, a nonprofit legal firm that has been taking negligent farms to court for decades, says he hears from many farmworkers in Glorietta’s situation on a regular basis. They almost always show noticeable symptoms of pesticide exposure, he says, but would rather endure untenable conditions than risk their jobs.

“Everybody is afraid to speak up,” he says. “Some people don’t have documents. Other people don’t have enough money to pay rent. Others live near the farm and don’t want to move. Maybe the school that their kids go to is nearby.”

Lopez says some smaller farmers may not intentionally be flouting the law in their pesticide application; they may simply be ignorant of the law. And with 86,000 farmworkers in the state’s Monterey County alone, regulators lack the resources and bandwidth to “see those fields every day.”

Still, strawberry workers and their allies are not without the power to make their workplaces safer. A few years ago, the UFW and a number of other advocacy groups worked on a successful campaign against the cancer-causing fumigant methyl iodide (which would have been used to replace methyl bromide). In 2012, the chemical’s maker, Arysta LifeScience, removed the product from the U.S. market.

Another example Pinal cites is a public-private partnership with which the UFW is involved called the Equitable Food Initiative, which is certifying farms that put stricter than average pesticide rules and more thorough training in place. (A food label is in the works.) And just this week, farmworkers in Baja went on strike to protest low wages, leaving strawberries, zucchinis, and tomatoes rotting in the field at the peak of harvest season.

Santa Cruz, California-based Swanton Berry Farm has for years exemplified clean, economically feasible strawberry production that respects the dignity of its workers. In 1998, the partially worker-owned business was the first organic farm to sign a contract with the UFW, AFL-CIO, and has a worker-owner model in place.

At the end of the day, though, consumers will likely have the last say. Earlier this week, Oregon-based Fair World Project sent a letter to the giant berry seller Driscoll’s with the signatures of 10,000 consumers who say they will not buy the company’s strawberries until it discontinues its relationship with Washington’s controversial Sakuma Brother’s Farm.

Sakuma’s workers allege that the farm has for years been unwilling to sign a contract that safeguards their safety and fair wages, and the boycott has been underway since late 2013.

“When farmworkers stand up for their rights and livelihoods, consumers will stand up with them,” said Dana Geffner, executive director of Fair World Project, in a statement. “Consumers do not value fresh berries more than the lives of those who pick them.”

Correction: This article originally stated that Chloropicrin was applied directly to strawberry plants. In fact, it is used as a fumigant before they’re planted.