Can the Country’s First Junk Food Tax Reduce Obesity and Diabetes on the Navajo Nation?

The new law will test the real-life implications of taxes for health. 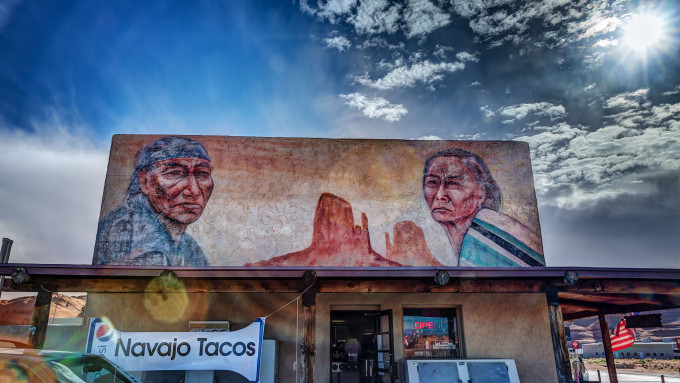 “Our communities are food deserts,” says Janene Yazzie, who recently moved from New York, back home to Lupton, Arizona. While she and her husband led health conscious lives on the East Coast, it has been impossible on the reservation. The closest Safeway is in Gallup, 22 miles away. So, like many of the 200,000 people who call the reservation home, the family must rely on local gas stations or a general store, where a frozen pizza might cost a couple of dollars, but a bag of apples runs upwards of $6.50.

“We essentially had no choice but to fall back on a diet heavy in terrible, highly processed foods, along with everyone else,” says Yazzie.

When I taught high school in Tohatchi, a rural tribal chapter in northwest New Mexico, I saw the same patterns first hand. Every day, my students would head to the store to load up on chips and sodas, only to return home to households with no electricity, where the storage of perishable foods (if there were any) created a challenge.

Now, a noteworthy new tax could help improve the diets of some who live in the Navajo Nation. Beginning April 1, the Nation will become the first place in the United States to impose a tax on junk food. The Healthy Diné Nation Act of 2014, signed into law by Navajo Nation President Ben Shelly last November, mandates a 2 percent sales tax on pastries, chips, soda, desserts, fried foods, sweetened beverages, and other products with “minimal-to-no-nutritional value” sold within the borders of the nation’s largest reservation.

Authored by the Diné Community Advocacy Alliance (DCAA), a grassroots organization of community volunteers, the legislation was modeled on existing taxes on tobacco and alcohol, as well as other fat and sugar tax initiatives outside the United States. The act follows on the heels of a spring 2014 amendment that removed a 5 percent tribal sales tax on fresh fruits and vegetables.

Existing efforts to create food sovereignty and increase access to healthy foods may also get a boost, including Robert Nutlousie’s edible landscape project in Black Mesa, Arizona and North Leupp Family Farms, a community-owned and operated farm near the Little Colorado River.

Those who advocate for a return to a more traditional diet hail the law as a positive change: The Navajo Nation has a 42 percent unemployment rate. Nearly half of those over the age of 25 live under the federal poverty line. The USDA has identified nearly all of the Navajo Nation as a food desert, meaning heavily processed foods are more available than fresh produce and fruit.

According to a 2014 report from the Diné Policy Institute there are just 10 full-service grocery stores on the entire Navajo reservation, a territory about the size of West Virginia that straddles parts of Arizona, New Mexico, and Utah. As a result, many people rely on food stamps to stretch grocery dollars with the inexpensive processed, fried, and sugary foods commonly found in gas stations or convenience stores.

But even having a grocery store nearby doesn’t guarantee access to healthy food. A DCAA survey of one major grocer in the town of Kayenta found approximately 80 percent of the store’s inventory qualified, in the group’s definition, as junk food. Compounding the issue is the continued popularity at family gatherings, flea markets, and ceremonial gatherings of lard-drenched frybread—whose dubious origins have been traced back to the “Long Walk,” the federal government’s forced removal of Navajos to a military fort in New Mexico 300 miles away from ancestral land in Arizona.

The heavy consumption of soda, fat, and processed foods has taken its toll. According to the Indian Health Service, an estimated 25,000 of the Navajo Nation’s 300,000 members have type-2 diabetes and another 75,000 are pre-diabetic. The tribe has some of the worst health outcomes in the United States, with rampant hypertension and cardiovascular disease. According to data collected between 1999 and 2009 by the Centers for Disease Control and Prevention (CDC) overall death rates for American Indians and Alaska Natives were nearly 50 percent greater than those of non-Hispanic whites.

While there have been no other “junk food taxes” put into place nationally, the movement to slow the consumption of unhealthy foods gained momentum last November after residents of Berkeley, California voted to tax soda and other sweetened beverages. (And there was a failed attempt back in 1992 to add a tax to snack foods, candy, and bottled water in California.)

But the nation is still slow to embrace the idea of targeted food and beverage taxes or using the revenue to fund public wellness initiatives—something that policy makers and public health experts say increases public support. In a 2011 New York Times op-ed, author and columnist Mark Bittman argued powerfully for a national tax on unhealthy foods. And the numbers support his argument.

According to the Rudd Center for Food Policy and Obesity, which supports a national sugar-sweetened Beverage (SSB) Tax, studies show a correlation between added excise taxes and lower consumption rates. One 2011 study published in Preventive Medicine showed that a penny-per-ounce tax on sugar-sweetened beverages nationally could generate nearly $16 billion a year in revenue between 2010 and 2015 while cutting consumption by 24 percent.

“We’ve seen that these types of taxes significantly improve public health and there is further potential to benefit the nation’s health whether it’s fiscally, physically or socially,” says Denisa Livingston, a community health advocate with the DCAA, which developed the Healthy Diné Nation Act. To be successful, she adds, health initiatives must approach the prevalence of obesity and diabetes on the Navajo Nation in two ways: by addressing the dominant unhealthy food culture and by improving healthy food access.

The sales tax came out of a series of work sessions in 2011 where community health advocates pinpointed obesity and diabetes as the biggest issues facing the Diné Nation. Community health assessments taken in Chinle showed diabetes, obesity, and unhealthy foods to be the top three concerns.

“It takes five or 10 years for formal food policies to take effect, but taxation has an immediate impact on consumer behavior,” says Livingston.

Ultimately, Livingston and other community health advocates hope to increase awareness of the connection between food, nutrition, and health in an area where Whole Foods isn’t even a gleam in developers’ eyes.

She’s says the bill has already opened discussion about what the future holds. “It has caused our people to ask, ‘What else can we do?’ or ‘What kind of projects should we start planning?’”

During dozens of presentations about the benefits of the Healthy Diné Nation Act she has given to tribal councils and committees over the last few years, Livingston has returned to the same message: “Food can either empower and make us strong, or it can kill us.”

On the Navajo Nation, that isn’t hyperbole.