International recognition a “pivotal point” for teaching kids about food. 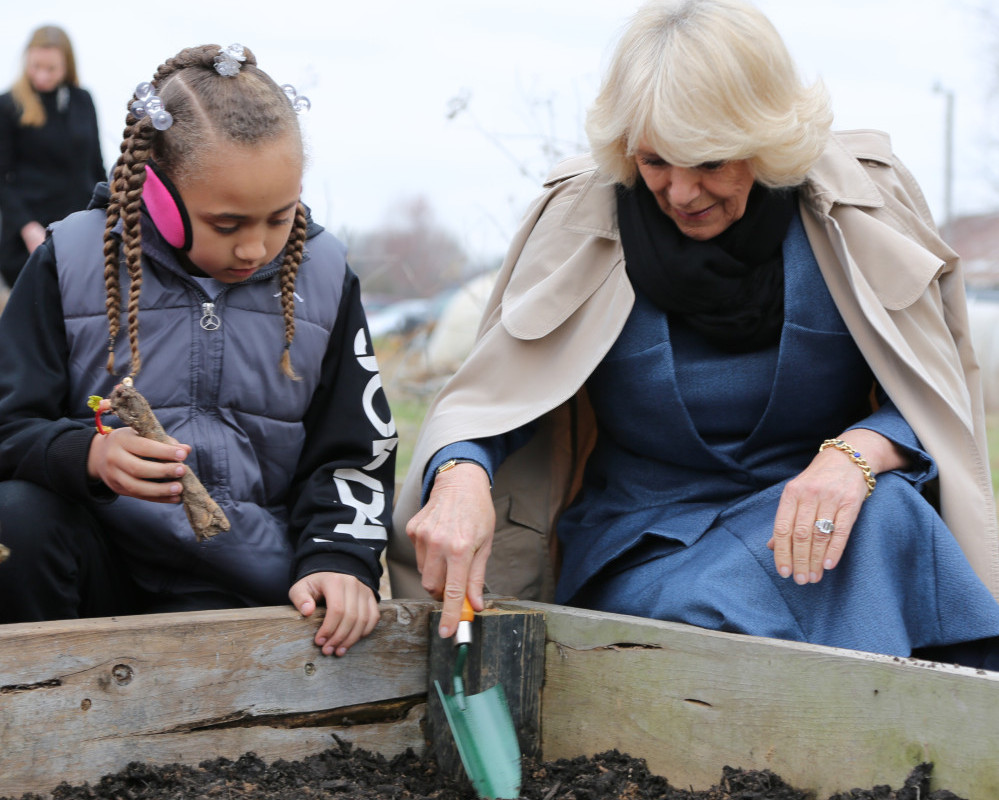 When the call came from the British Embassy, Melissa Kratzer was surprised. Would the Kentucky-based Food Literacy Project want to host Camilla, wife of Prince Charles and the Duchess of Cornwall, the embassy wanted to know. As a small grassroots nonprofit dedicated to educating young people about healthy food, Kratzer says, the group has never gotten a lot of celebrity attention. “We were blown away,” she recalls.

Last week, His Royal Highness and the Duchess spent the final day of their trip to the U.S. in Louisville, and the plan became a reality. Camilla was given a private tour of the farm-based education center, as part of the royal couple’s larger plan to highlight community-based sustainability efforts.

What does it take to get royalty’s attention?

“In the UK, Her Royal Highness is committed to promoting British food and encouraging people (and children) to grow their own food and eat properly. The Food Literacy Project is a good example of what is being done by the people of Louisville to educate young people about food and farming,” said a British Embassy spokesperson.

The Food Literacy Project has served over 25,000 local youth since it was founded in 2006. The project highlights “field-to-fork” experiences on a working farm as a means of cultivating healthy eating habits as well as a respect for the land and an understanding of sustainable living. “The work we’re doing here is about more than getting a kid to eat their vegetables,” says Food Literacy Project Board President Martha Geier.

Like the Duchess of Cornwall, most kids first encounter the farm on a day-long visit. A standard tour includes some aspect of harvesting and cooking, usually including the learning garden, the outdoor kitchen, and the worm bin. Younger students receive produce to take home, while the older ones may come away with an understanding of new concepts, like compost and food miles.

The majority of the young participants live in neighborhoods where fresh food is scarce, so the Food Literacy Project’s main goal is to expose them to a new way of thinking about the food system and their place in it.

In 2014, the organization piloted an after-school program called the Field-to-Fork Club at one of its partner elementary schools. Students were invited to work in the garden, do some basic cooking, and visit with professional chefs. For the last half of the 12-week session, parents were invited to join in learning how to prepare healthy meals with their children. “The kids got so excited–some of them were literally dragging their parents out of the car,” says Kratzer.

Other programs focused on young people include a partnership with Louisville Metro Youth Detention Services, as well as a summer job scheme called the Youth Community Agriculture Program, which consists of paid work on the farm along with leadership and communication training.

A small, but important, component of the Food Literacy Project’s educational efforts is professional development for educators and food service workers in public schools. The Project partners with a number of area schools to help teachers integrate food education into the curriculum.

The Food Literacy Project’s ties with local educators are longstanding. The group was born out of a teacher’s request in 2005 to bring her students to the farm for a hands-on lesson about food.

Most nutrition education in American public schools is classroom-based, if it exists at all. The National Center for Education Statistics (NCES) reports that textbooks and school meal programs are the mainstay of nutrition lesson planning in public schools. But the NCES also notes that the primary outside source of information used by teachers comes from the food industry in general (86 percent) and trade associations in particular (87 percent). But those types of nutrition classes rarely helps students understand the bigger picture of where their food comes from, say food literacy advocates.

“When you are food literate you understand multiple aspects of the food system,” says Amber Stott, Founding Executive Director of the Food Literacy Center in Sacramento, whose educational offering extends from basic cooking skills to a food film festival. In 2012, the Food Literacy Center worked with the California legislature to declare September Food Literacy Awareness Month, defining food literacy itself as “understanding the impact of your food choices on your health, the environment and our community.”

It may be a relatively new concept in education, but interest in food literacy is growing around the country. Approaches range from the one-off Pure Food Kids workshops being run in Washington State and New York City, to the comprehensive programming offered by The Food Trust in Philadelphia’s schools, libraries, recreation centers, farmers’ markets, corner stores, and supermarkets.

The Importance of Celebrity Endorsement

Food literacy is growing in popularity in Kentucky as well, but the Food Literacy Project is the only organization of its kind in Louisville. “The demand for our services far outpaces our resources,” says Executive Director Carol Gunderson. The main hope for the royal visit is that a higher public profile will translate into more donations from individuals. Last year, the Food Literacy Project relied on foundation and corporate grants for almost 60 percent of its funding.

And there’s reason to believe more support could happen. Amber Stott of the Sacramento group recounts a visit from Jamie Oliver in 2012. “It’s fantastic when you get that stamp of approval from well-known people, because it makes everyone understand [your work] better and take it seriously.”

The royal visit to the Food Literacy Project in Louisville lasted less than an hour, but was widely featured on local news channels. The Duchess toured the farm and then helped students plant rhubarb in the learning garden as cameras rolled. According to fifth-grader Mattie Jackson, “It was kinda scary, but also pretty cool, and I had a good experience.”