The San Francisco organization serving primarily immigrants and communities of color has inspired similar projects around the country. 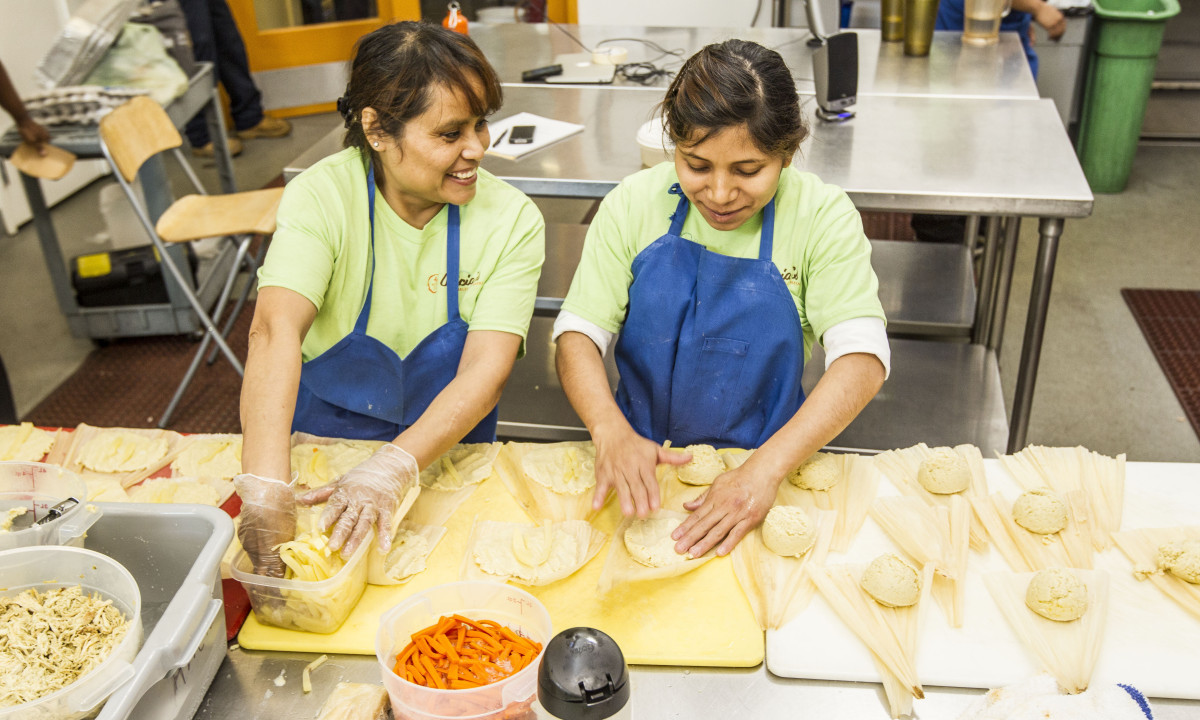 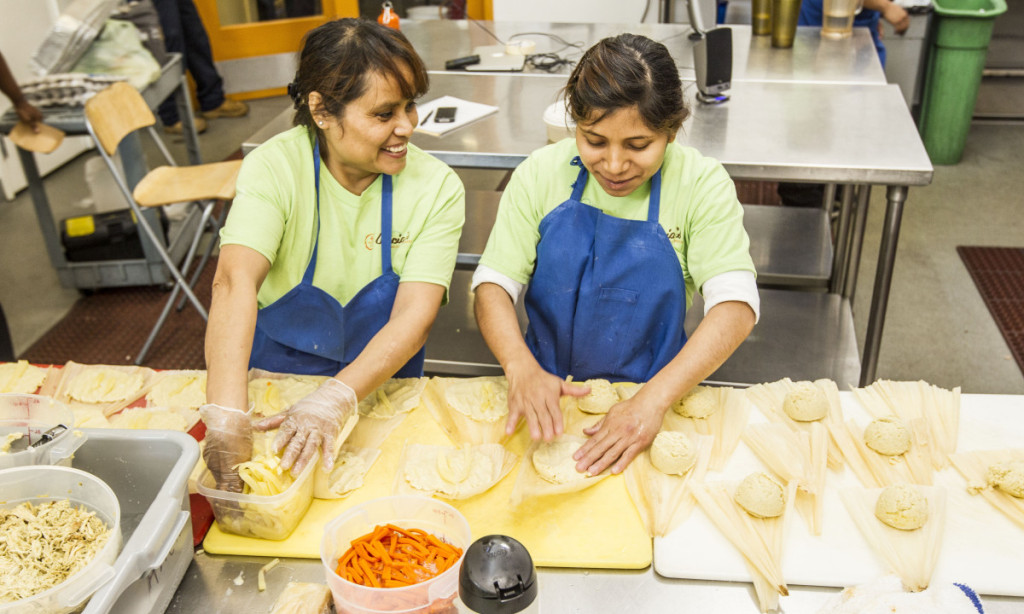 When Mariko Grady joined La Cocina’s incubator kitchen three years ago, the thought of owning her own business was little more than a dream. Following the earthquake, tsunami, and nuclear disaster that devastated Japan in 2011, she had started selling her homemade misos and kojis to friends to raise money to donate to victims in her home country.

Grady found that there was a hunger for her handcrafted ferments even after she completed her fundraising campaign. She came to La Cocina to formalize her cottage food operation, so she could share her passion for the healthy foods of Japan with a wider American audience.

“La Cocina gave me many chances to think about what I wanted to do,” says Grady, now the owner of Aedan Fermented Foods. “At that time, I had no idea. I just knew I wanted to do a business, and I wanted a commercial kitchen and insurance.”

In 2005, La Cocina was founded in San Francisco’s Mission District to meet a growing need for support of women-owned food businesses, specifically low-income women from immigrant communities and communities of color.

“That focus is a reflection of the unfortunate reality of our economy, particularly in our food system,” says La Cocina Deputy Director Leticia Landa. “If you look around the city and country, the vast majority of people in ownership positions are men.” Beyond the economic and bureaucratic hurdles of opening a licensed food business, women may face sexist stereotypes about their physical strength and ability in the workplace. For some, family responsibilities can create additional challenges, especially in an industry where working late nights and weekends is often part of the norm.

In the 1990s, the now-defunct Women’s Initiative for Self-Employment, a training program for women entrepreneurs, found that many women writing food business plans were not launching their businesses. To find out why, the organization conducted a study and found that the bottleneck was affordable kitchen spaces. “It was too expensive to get permitted, so people were remaining informal,” says Landa.

With help from the Women’s Initiative, the Women’s Foundation of California, and a generous donor, a nonprofit was formed to provide licensed commercial cooking space, business training, and marketing support for these innovative fledgling businesses. La Cocina (literally “the kitchen” in Spanish) currently works with 37 entrepreneurs (34 of which are women) and has launched 19 businesses.

Since La Cocina first helped pioneer the concept of the kitchen incubator 10 years ago, shared kitchens like Detroit Kitchen Connect, LA Kitchen, and the D.C.-based Union Kitchen have popped up across U.S. (the website database Culinary Incubator currently lists more than 450). These spaces support beginning entrepreneurs by minimizing some of the start-up costs and risks through shared resources, safety inspections, and equipment and offering opportunities to grow and promote their businesses.

“We don’t create entrepreneurs,” says Landa. “People come to us, and they already have incredible products, and they’re already talented at selling them. It’s a matter of providing resources.” 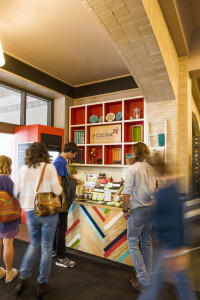 From Concept to Market

Entry into La Cocina’s incubator is limited and highly competitive. After attending an orientation, applicants must submit a comprehensive business plan and application detailing their vision, experience, and dedication.

Promising candidates are interviewed and their products are taste-tested, one of the most important parts of the application process. “We want to find people who are making something unique and have a chance to survive in a very competitive landscape,” says Landa. “We care a lot about product quality and business viability.”

Once accepted, participants start a six- to eight-month pre-incubation curriculum, which covers topics like marketing, product development, operations, and finances. They then begin formal incubation, which can take several years. Entrepreneurs are matched with La Cocina graduates and other business owners in the community to serve as mentors, and graphic designers to help them develop their brand. They test products and build a following through direct sales, retail, or catering. Within the first couple years, the majority of entrepreneurs hire at least two people to help them in their kitchen, according to Landa.

During their training, participants have the opportunity to sell their products directly to customers at La Cocina events like the annual San Francisco Street Food Festival and a kiosk inside the San Francisco Ferry Building. La Cocina also partners with CUESA to showcase a different program participant at Ferry Plaza Farmers Market each month.

“It provides people with a place to have initial sales,” says Landa. “When you’re just getting started, it’s hard to get accepted into a farmers market. You need to be able to start testing your products in front of customers.”

Bugs for the Masses

Monica Martinez, an artist and designer who immigrated to the U.S. from Mexico City, is one of La Cocina’s current entrepreneurs. Inspired by pre-Hispanic Mexican cuisine, she created an art project building micro farms that people could use to raise insects as a low-input alternative protein source.

But she soon realized that there was a lot of education to be done around the ancient practice of entomophagy (eating bugs), and it might be better to help Americans warm up to the idea by first creating delicious food.

When she moved to San Francisco, Martinez found herself among 100 attendees at a La Cocina orientation and decided to apply. For several months, she developed her business plan for a bug-based street food business called Don Bugito.

“I was a little skeptical about whether [the judges on the committee] were going to want to try my food, because it was all edible insects,’” recalls Martinez. “But they were very amazed and positive.’”

Over the last five years, growing Don Bugito has had its challenges, as American eaters are still largely unaccustomed to eating bugs. Martinez has switched from a food truck model to crunchy packaged treats like chocolate-covered superworms and chile-lime crickets. She’s working on developing her product line, and recently introduced a maple cricket granola.

Interest in edible insects is on the rise, and with a marketing boost from La Cocina, Don Bugito has helped elevate the trend. “It’s been a journey, and it’s been amazing to have the support of La Cocina along the way,” she says. “People take Don Bugito seriously.”

The incubation time in La Cocina’s program varies by participant. While a few entrepreneurs have bowed out of the program for personal or professional reasons, most naturally grow out of La Cocina’s shared kitchen and graduate by opening their own restaurant or production space.

For Grady, being a part of La Cocina is helping her refine her vision for Aedan Fermented Foods. As a mother herself, she’s motivated to help busy parents nourish their families and has started teaching classes to share her techniques. “My dream is not manufacturing my product in some factory. It’s sharing with people how to make miso and create healthy meals at home.”

Christine Doerr, owner of chocolatier Neo Cocoa, graduated from the program in 2011 when she opened her own kitchen in Belmont. For her, the benefits of being a part of La Cocina extend well beyond just business training. “I’ve made some of the best business relationships, as well as some great personal friends,” she says. “The current program participants are a huge inspiration to me also.”

Landa says that the community experience is one of the largest unspoken perks of La Cocina’s program. “People swap stories and exchange tips and tricks,” she says. “That part of our community is really valuable, having so many entrepreneurs in one place who are able to support each other in their challenges.”

Martinez agrees. “La Cocina is backing me up, and that’s really huge. I think that’s why Don Bugito is still alive.”